Former American President Dwight D Eisenhower had three secret meetings with aliens from another planet, a former US government consultant has claimed. The 34th President of the United States met the extra terrestrials at a remote air base in New Mexico in 1954, according to lecturer and author Timothy Good. Eisenhower and other FBI officials are said to have organised the showdown with the space creatures by sending out ‘telepathic messages’. 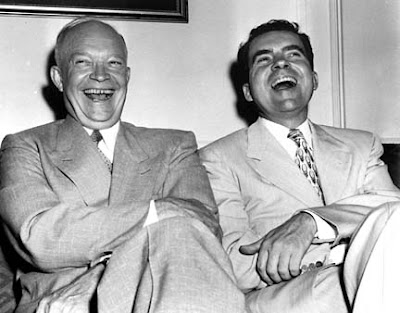 Eisenhower and Nixon. If all Presidents and world leaders are making deals with with aliens, why doesn’t someone tell the public? They exchanged favours for technology. ‘Favours’ included agreeing alien nations could abduct human beings as they wished.

The two parties finally met up on three separate occasions at the Holloman Air Force base and there were ‘many witnesses’, it is claimed. Conspiracy theorists have circulated increased rumours in recent months that the meeting between the Commander-in-Chief and people from another planet took place. But the claims from Mr Good, a former U.S. Congress and Pentagon consultant, are the first to be made publicly by a prominent academic.

Speaking on Frank Skinner’s BBC2 current affairs show Opinionated, he said that governments around the world have been in regular contact with aliens for many decades. “Aliens have made both formal and informal contact with thousands of people throughout the world from all walks of life,” he added.

Asked why the aliens don’t go to somebody ‘important’ like Barack Obama, he said: “Well, certainly I can tell you that in 1954, President Eisenhower had three encounters, set up meetings with aliens, which took place at certain Air Force bases including Holloman Air Force base in New Mexico.” He added that there were “many witnesses”.

Eisenhower, who was president from 1953 to 1961, is known to have had a strong belief in life on other planets. The former five-star general in the United States Army who commanded the Allied Forces in Europe during the Second World War, was also keen on pushing the U.S. space programme.
His meeting with the cosmic life forms is said to have taken place while officials were told that he was on vacation in Palm Springs, California, in February 1954.

The initial meeting is supposed to have taken place with aliens who were ‘Nordic’ in appearance, but the agreement was eventually ‘signed’ with a race called ‘Alien Greys’.
Mr Good added: “We know that up to 90 per cent of all UFO reports can be explained in conventional terms. However, I would say millions of people worldwide have actually seen the real thing.”

According to classified documents released by the Ministry of Defence in 2010, Winston Churchill may have ordered a UFO sighting to be kept secret. The UFO was seen over the East Coast of England by an RAF reconnaissance plane returning from a mission in France or Germany towards the end of the war.

Churchill is said to have discussed how to deal with UFO sightings with Eisenhower.

The next clip reveals that after Roswell where an alien craft was shot down by American military, revenge attacks took place across the world, including attacks on civilian aircraft, as well as military. Between 1952 and 1956, the US military lost 18,000 planes in ‘accidents’, many disappearing altogether with no crash.

Gordon Cooper astronaut revealed that not a day goes by in the USA without UFOs being visible on radar screens. He also claimed that he and many other pilots had been able to fly actual or replicated alien craft, and had been doing so for quite some time.

Two Soviet scientists revealed that there were two large alien craft on the moon during the lunar landing. Neil Armstrong was overheard discussing what he had seen while on the moon, saying,’it was incredible. we were warned off making a base on the moon. they were menacing.’ The CIA decided to cover up the details of alien presence on the moon.

From the mental notes I made from both videos, the stargate in Yemen not being reported in OSM (Old Stream Media) didn’t surprise me, despite the international mass-grouping of naval vessels. The sheer amount of stargates that are in abundance around the globe is an eye-opener too.

Particularly liked his take on the fact that ET’s/ED’s will help us to some extent, but it’s up to us to get off our back-sides and wake up and do something about it. With regards to *DOING* something, then I can’t think of a better way than educating people to the best of our ability (whilst enduring the initial ridicule). – Cobalt

TAP – I am sure your notes were no more mental than the ones I write commenting on videos, Cobalt. Thanks for the links, and the encouragement!