Hollywood movies are usually presented as a form of entertainment, but their plots often conceal a specific agenda. “Disaster movies”, films about the end of the world through various mass crises, are particularly interesting as they all follow the same basic formula and glorify the same entities. In this article, we’ll look at the disaster movie ‘Contagion’ and how it “teaches” its viewers who to trust and who not to trust during a crisis.

Most people watch movies to be entertained. Well, I for one can say that there was absolutely nothing entertaining about Contagion. In fact, the only difference between this movie and state-sponsored educational movies shown in schools is that with Contagion you actually have to pay to be indoctrinated … and to see Matt Damon. During the cold war, students were shown videos instructing them to “Duck and Cover” in case of a nuclear attack. Contagion conditions the masses to expect martial law and to throw themselves at the first available vaccine in case of a crisis.

Featuring Hollywood mega-stars like Matt Damon, Laurence Fishburne, Jude Law and Gwyneth Paltrow, Contagion is a big-ticket Hollywood movie, but also an infomercial promoting specific national and international agencies while encouraging specific behaviors from the public. The plot of the movie appears to follow the big H1N1 scare of 2009 that left many citizens uncertain about the actual risk of the virus. Indeed, after months of terrifying news crowned by a massive vaccination campaign, an important portion of the population concluded that the H1N1 scare was grossly exaggerated and and thought that a vaccine was unnecessary. 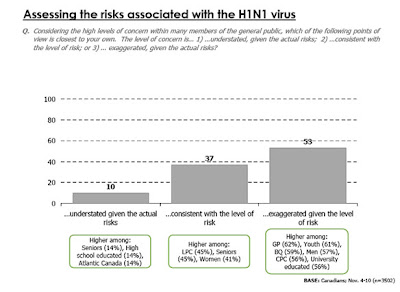 This poll taken in November 2009 shows that 53% Canadians believed that the risks associated with the H1N1 virus were exaggerated.

In the wake of this “crisis”, the UN’s World Health Organization (known as the WHO) was harshly criticized and even accused of colluding with Big Pharma to sell vaccines. The U.S. Centers for Disease Control and Prevention (the CDC) also had its credibility tarnished as investigations revealed that the agency misled the public regarding the number of actual cases of H1N1 (for example, see this report from CBS News). As a result, these two agencies needed a good PR stunt to restore their credibility and to scare the hell out of the public. This is where Contagion comes in.

Directed by Steven Soderbergh, Contagion was produced with the active cooperation of the CDC, the WHO and other governmental organizations and its function is clear: To present a hyper-realistic disaster scenario to justify the vaccination campaigns promoted by these agencies while discrediting those who criticize them.

Nothing in the movie hints that it is a work of fiction. Quite to the contrary, everything in Contagion is made to be as realistic as possible, using actual locations and governmental agencies, to make the story as plausible – and as frightening to the masses – as possible. As the slogan of the movie says: “Nothing spreads like fear” and, boy, does it try to spread fear. This movie’s message is: “Nothing was exaggerated, and next time there’s a virus outbreak, listen to us … or you’ll die”.

TAP – so much TV is based on ‘educating’ people that vaccination is the only way to stop disease. I watched Country File last week, and sheep are suffering an outbreak of a vaccine-created disease, which they claim is being spread by midges…..Midges??!!! In this weather. I don’t think so.

The midges were said to have crossed the channel to bring the disease to the UK. Not many sheepp have contracted the illness, yet the price of lamb has overnight doubled in shops.

It’s just another way to deprive people of healthy nutrition, and have an excuse for doing so, while they chemtrail the air we breathe, and poison the water with fluoride and so on. If you want to find something scary, try the government. They do nothing to protect people while the elites saturate our environment with toxins, wreck our economy and spread disease and illhealth with vaccines, Genetically Modified Organisms, I mean High Tech Agricultural Output and propaganda to try to make us swallow it all!!!