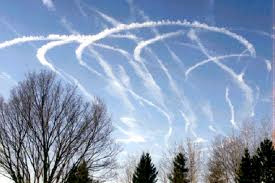 I sat on the port side on a wide bodied jet and travelled just under thirteen hours eastwards from Amsterdam. Chemtrails were visible all the way to Amsterdam on the connecting flight from Birmingham, then across Holland, Germany, Poland and the Baltic States, Riga being particularly filthy. Before Moscow they stopped for a while, but chemtrails resumed over Moscow as it was turning dark.

After Moscow, the stars and lights on the ground shone crisply for the next few hours suggesting there were no further chemtrail operations east of Moscow.

It’s not just the chemtrails that are so obvious looking at them from 35,000 feet, many being laid at that level and some a bit higher in altitude as well as at lower altitudes. What is also striking is the complete lack of normal cloud cover across Europe. The trademark chemtrail milky clouds are all you see cloudwise. They are not opaque like normal clouds but see-through, making the ground look like it’s covered with a dirty haze and nothing else, and the sky is the same for thousands of miles.

Denmark, Sweden were heavily affected. I could see numerous planes operating leaving chemtrails towards Stockholm and Copenhagen as we passed over the Baltic.

This morning was a different story. The night was brief, only four hours, and as the sun came up, the whole vista outside the plane was covered with the kind of clouds that once cloaked the ground across Europe, nice fluffy white cotton wool, around 20,000 below the plane. This clean white sea of cloud was too bright to look at for more than a few seconds, before I had to shut the window covers. The sun shone with all her power blinding anyone looking out without powerful dark glasses. In the chemtrail skies across Europe, the clouds don’t reflect light in the same way, and filter the sun, so I could watch the sky the whole way with no difficulty.

We traveled the eastern Himalayas, China, northern Vietnam and the South China Sea to the Philippines. I saw not one chemtrail after Moscow. I checked every plane I saw, and the contrails lasted only a minute or two before disappearing.

Europe is constantly covered by multiple chemtrailing planes spewing out the waste products of the nuclear power industry, the very contents of the fabled dirty bomb, from the western reaches all the way to Moscow – strontium, uranium, barium and aluminum amongst others. I witnessed tens of them at work, one looking as if it were a passenger jet passing overhead and across our path north to south from the direction of Sweden or Finland.

NATO doesn’t control the ground heading east, which is why the populations of Asia are so far not being targeted for elimination by poisons from the sky. The signatories to NATO are all being poisoned breathing the air where they live, the ordinary people as always being the real enemy of the elites, who fear loss of their extraordinary power.

The contrast between the two continents was stark. Yet maybe only 1% of Europeans realize they are effectively living a vast gas chamber, designed to kill at least half of the population over a period of a few years. This is NATO’s real war, a war against the people who imagined they were there to defend them. It goes completely unreported in the main media. Few can grasp the enormity of the crime being committed against humanity every day in the sky above their heads.

The few media reports usually pretend the poison attacks are ‘geo-engineering’ designed to cool the planet. The pilots are told the same story. An earlier generation of gas victims were promised ‘showers’.

Alex Jones on background to chemtrails

Neurological disorders are increasing as toxic metals in the environment increase.

There have been debates in the House Of Commons about regulating geo-engineering. They admit there is no regulation currently. The UK has agreed with the US to carry out a programme of geo-engineering. They discuss trans-national boundary implications. They can’t ban it, or regulate it, as the technology is not sufficiently predictable.

The chemicals are mixed with the jet fuel. They have patents on how to do this. The earth is getting dimmer as aluminium dioxide is sprayed, and barium. Children are getting Parkinsons Disease at aged three. They will kill off life as it is, and then replace it with a patent for new life with in-built resistance to the poisons that killed off the earlier life-forms.

35 Responses to “China Is Chemtrails Free”