THE ELDERS OF ZION SAYS: GIVE THEM ENTERTAINMENT.

You will find reference to this in
‘BEHOLD A PALE HORSE’ tap blog recommended book.

THERE WAS FAR MORE TO THE BEATLES THAN YOU COULD POSSIBLY IMAGINE.
I will put together over the next couple of weeks, information that should be of Great Interest

Paul McCartney of the Beatles, and Brian Epstein, their manager, were in a car accident in 1966. The official government story is that neither was seriously injured; that the accident was insignificant.

However, rumors began to spread that McCartney had died, and that somebody who looked like McCartney had been given plastic surgery to make him look even more similar, and that the fake McCartney had replaced the dead McCartney. Supposedly, McCartney’s relatives and friends went along with the scam for reasons that defy explanation.

That rumor started when I was a child. Everybody I knew assumed it was a publicity stunt. But there was enough supporting evidence to keep the rumor alive.

For example, after the car accident the Beatles announced that they would never perform in public again.

This can easily be interpreted as a sign that they wanted to avoid contact with the public because Paul McCartney’s fans would notice that he was not the real McCartney.

There are also rumors that a McCartney look-alike contest was announced after the accident, but the winner was never announced. Why was that then?

BUT THIS IS JUMPING AHEAD.

First we must consider why it was thought necessary to go to these measures.

THERE WAS FAR MORE TO THE BEATLES THAN YOU COULD POSSIBLY IMAGINE.

The most recent British invasion of the U.S. took place in February 1964….Instead of swords and muskets they carried . . . GUITARS!!

Of course, we are referring to the rock music invasion….Rock music was popularized in the U.S. by Elvis Presley, but Presley was not instrumental in the far reaching social and moral revolution that followed the British rock music invasion of 1964. The Druids were noted as bards or “musicians” and their hypnotizing drumbeats accompanied their diabolical human sacrifices.

Beatles arriving in New York on February 7, 1964. The MI6 Beatles broke down the door, and a flood of morally degenerate rock stars (led by the Rolling Stones), invaded the U.S.

The Fab Four are: Matthew, Mark, Luke and John.

It was early 1964. America knew an attack was coming. The chatter had been on the radio for weeks, played again and again. Then on Feb. 7, the shock troops from England landed at Kennedy International Airport, renamed six weeks earlier for the president recently assassinated in Dallas.

For two days they surveyed the place they proposed to conquer. Then, on Sunday, Feb. 9, the first wave of a cultural attack on the United States began in Manhattan, at CBS Studio 50, 53rd Street and Broadway, the home of “The Ed Sullivan Show.” In what was either some supernatural coincidence or the shrewdest move in the history of popular culture, four young Brits entertained and energized a still deeply traumatized nation. 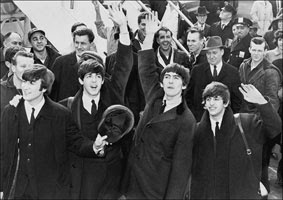 The Beatles launched on America by the Illuminati

That night, the Beatles played for a television audience of more than 73 million people — — about 40 percent of the U.S. population — and began popular culture’s seismic shift, jump-starting the process of making pop culture really pop, in every sense of the word.

“I Want to Hold Your Hand” hit No. 1 on the music charts in the United States on Jan. 16, 1964. That song was the first salvo in the Beatles onslaught.

Over the next four years or so, a menagerie of animals, stones, troggs, zombies, kinks, faces, hermits, yardbirds, pacemakers, bluesbreakers (and Who else?) would land on American shores, their music crowding the airwaves and the Billboard charts — reaffirming the “special relationship” between Britain and the United States that Winston Churchill hailed in a speech in 1946. But in a way Churchill probably never saw coming.

There’s a lot powering this year’s model of Beatles retrospective: An exhibit of photographs from the 1964 North American tour, images by former life photographer Bill Eppridge, will be on view at the Smithsonian Institution’s National Museum of American History in Washington through July 5.

Reuters reported that the Fab 40 Committee, an ad hoc group of former friends and associates of the band, will begin its own anniversary celebrations with a party and concert at New York’s Hard Rock Cafe on Monday, organizers said Jan. 16.

A Beatles’ film tribute continues through Feb. 12 at the American Film Institute’s Silver Theater and Cultural Center in Silver Spring, Md., and for the next three months, the New York and Los Angeles branches of the Museum of Television & Radio salute the group with photo and audio retrospectives.

In Seattle starting Feb. 27, the Experience Music Project celebrates the anniversary with “Beatlemania!,” an exhibit on the band and its cultural influence. All these come in the wake of a recent book on the group’s arrival in the U.S., and last year’s release of a DVD box set of the band’s “Ed Sullivan” performances.

It’s somewhat ironic that the biggest moment in the history of popular music was first experienced in America as a television event. “The Ed Sullivan Show” had for years been a comfortable hearth-and-slippers experience; the show’s variety format accommodated a wide range of stars, from Soupy Sales to Jackie Gleason to the Italian puppet mouse Topo Gigio. For the 73 million viewers watching in February 1964, the Beatles were a cultural wake-up call that few, if any, could fully understand.

“Especially because they appeared in four shows, the Beatles became a ministery within the series of the ‘Ed Sullivan Show,’ ” said Robert J. Thompson, director of the Center for the Study of Popular Television at Syracuse University.

“What made it fascinating as television is that music was already part of a fragmented culture,” Thompson said. “The kids were buying Elvis, the adults buying other things, but television was a huge cultural trough everyone was feeding from. ‘Ed Sullivan’ was watched by everyone — kids, parents, grandparents — so it forced everyone to come to terms with this phenomenon.

Thompson said the Beatles and the later British bands would usher in a cultural shift that, by the late 60s, meant “the counterculture had jumped the counter. The bubbling counterculture would become the culture.”

“Today they seem so harmless, so unshocking, so milquetoast,” said noted rock biographer Charles Cross, now working on a book about Jimi Hendrix.

“This wasn’t the Sex Pistols singing about the Queen, but it had a similar shock value. It made being a rock fan in America special, it gave an identity to that role it didn’t have previously.

“I can’t tell you how many journalists have done stories on people who cite that as the moment they decided to be a musician,” Cross said. “[E Street Band drummer] Max Weinberg told me that seeing Ringo on that show solidified in his mind that he would be a drummer.”

The frequent fliers
“In the U.K., you had a really rich environment for the blossoming of this new musical style,” Thompson said. “Since [Americans and Britons] speak the same language it was inevitable it was coming anyway. … Once the Beatles came here and did so well, the natural tendency was to see what else was going on.”

What else included a range of bands literally on the Beatles’ heels. The Rolling Stones took their first U.S. tour in June 1964, beginning their own special kinship with the states. The Animals came over in September 1964; the Hollies and the Kinks first toured America in 1965, followed by late-comers The Who, who first toured the states in 1967, opening for (believe it) Herman’s Hermits. And on and on.

“It wasn’t just the success of the Beatles, the Kinks and the Who,” Cross said. “This beachhead brought two dozen other bands into the United States. They found an audience and a popularity that exceeded their popularity in Europe. America was finally right for multicultural influences.”

No taxation without emigration

Reasons for the British Invasion seem to often hinge on emotional timing and rock’s inevitable global reach. But for the British emigres making the music, another side of it was purely practical. Their migration was also spurred by the chance to make a handsome living without the crushing burden of British taxes, which exceeded 90 percent in the highest brackets

Visit msnbc.com for breaking news, world news, and news about the economy

Some bands in the 1960’s took it creatively to heart. Beatle George Harrison’s 1966 song “Taxman” put the situation in perspective:

Thats all I have time for at present, but I have a lot more STUFF on THIS, which I will send shortly, but the Beatles were one of the Biggest Weapons TPTW had to undermine the American Culture. It is a very deep subject which I will try to explain in due course. There were several incidents that occurred that almost put the Project Off Course, when we can only presume after the Arranged Car Crash, Mc.Cartney had to be replaced with a Double, to continue with The Exercise.

Didn’t you like the False Flag Analysis of THE OLYMPICS Tap? I thought it was one of the best I have ever come across.

TAP. I love it, Wasp. But I don’t want to upload all those links. And it’s a bit long. Could you do it?! (Also – I’m still struggling with the Paul McCartney double story! Can it really be true? It’s almost too fantastical.)

Surely the ‘Paul McCartney died’ story is the leg pull, to make people doubt the other part of the Illuminati control story, which is substantially true.

11 Responses to “THE BRITISH INVASION OF AMERICA”