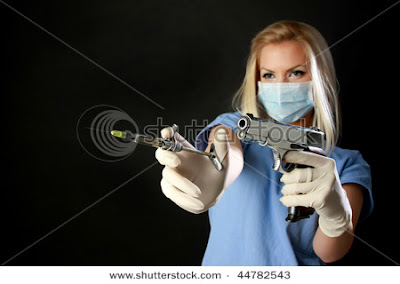 Sent in by Zheng Yong

(NaturalNews) Get your shots, or else get shot.

That is the message being sent by the Bill & Melinda Gates Foundation and its partners in Africa that are helping the organization achieve its goal of vaccinating every single child on the planet (http://www.naturalnews.com/032900_Bill_Gates_vaccinations.html).

According to a recent report in The Malawi Voice, at least 131 Malawian children were vaccinated this week at gunpoint after having previously fled the country with their parents to avoid the mandatory jabs.

Reports indicate that a number of children and their parents belonging to Zion and Atumwi Churches fled the southeast African country of Malawi to neighboring Mozambique a few months ago in order to avoid a measles vaccine campaign.

Upon recently returning, officials apparently learned of the unvaccinated children’s whereabouts and, with the help of Bill & Melinda Gates Foundation allies, forcibly injected them at gunpoint with the vaccines.

“We were alerted that some children who were hiding in Mozambique were back in the country and we asked police to escort the health officials in order to vaccinate them, and we have managed to vaccinate about 131 children,” said Dr. Medison Matchaya, District Health Officer in Nsanje, Malawi, to the Malawi Voice.

The faith and personal beliefs of the children and their parents obviously convinced them that the vaccines were not a good idea — and as individual human beings, they have every human right to deny any form of forced “medicine” that violates their convictions or risks putting their health at serious risk — which is why they were willing to flee in the first place.

But thanks to programs launched and promoted by the Bill & Melinda Gates Foundation, these and many other Africans no longer have a choice but to accept forced vaccinations or face being murdered by police.

In January 2010, Melinda Gates took a special trip to Malawi to see how the country was progressing at achieving the United Nation’s Millennium Development Goals, which include “ending poverty” by 2015.

In a video posting at the Gates Foundation website, Melinda lauds Malawi’s efforts to reduce child mortality, which include the establishment of 11,000 “health surveillance assistants” that she says “spend three weeks out in the villages … providing basic vaccinations … and they make sure the vaccinations happen not just at the village level, but all the way back through the system” (http://www.gatesfoundation.org/maternalnewbornandchildhealth/Pages/me…).

And just how do these “health surveillance assistants” make sure that the vaccinations happen? By forcing villagers to get them at gunpoint which, of course, is not mentioned in Melinda’s video blog. If you simply watch the video and accept it at face value, you will be left with the false impression that the Malawi government’s health initiatives are nothing but benevolent efforts to help people that want it.

In reality, the “health surveillance assistants” that Melinda speaks of are more like health care police that, with the backing of actual armed police, force villagers and those “all the way back through the system,” as Melinda puts it, to get vaccinated whether they want to or not.

And if they refuse, they can literally be arrested and thrown in jail, or potentially even murdered. This is the dirty reality behind the “humanitarian” efforts of the Bill & Melinda Gates Foundation.

The message emanating from the likes of the Bill & Melinda Gates Foundation and its partners in Malawi is very clear: accept our vaccines or face legal punishment.

Though it is quickly diminishing even in the US, the freedom to not vaccinate is something that most states still respect, whether it be for personal, religious, or health reasons. But in developing countries that have been targeted by groups like the Bill & Melinda Gates Foundation, this is simply no longer the case.

The same Malawi Voice article reports that Chipiliro Kalimira, a member of the Seventh Day Apostolic faith that does not believe in vaccines, was arrested and put in prison on a two-year term for refusing to let authorities force the measles vaccine on his three children.

Kalimira cares for a number of orphans at his home in addition to his own children, and has asked the court to be lenient with him, but it refused. Instead, the court sentenced him to 24 months imprisonment with “hard labor.”

Freedom of vaccination choice simply does not fit the agenda of the Bill & Melinda Gates Foundation. And the group, by its very nature, is complicit in helping to establish the types of dictatorial health care police states that are willing to arrest parents for not vaccinating their children, by the mere fact that it continues to support them.

The Gates Foundation will never come right out and say that it supports forced vaccinations at gunpoint — that, of course, would be bad public relations. But by wrapping its “humanitarian” efforts in pleasant rhetoric accompanied by heart-wrenching photos of poor Africans — all while hiding what is really taking place behind the scenes — the Gates Foundation is demonstrating that its efforts are far from benign, and, dare we say, evil.

(NaturalNews) When you buy Microsoft products, you are now promoting the pharmaceutical industry and its global vaccine agenda.

How so? In 2009, Microsoft purchased a key piece of technology from the drug company Merck, the world’s largest maker of vaccines (which Bill Gates says can help “reduce the global population” by 10 to 15 percent). That technology, as you’ll see below, can conceivably be used to develop eugenics vaccines that target specific races and nationalities with infertility-inducing pharmaceuticals — something that is entirely consistent with Bill Gates’ openly-admitted goal of reducing world population through the use of vaccines (see link to video below).

This gene-targeting vaccine research technology purchased by Microsoft was developed by the company known as Rosetta Biosciences, formerly owned by Merck. Their software is described as a way to “figure out how genes interact with each other, analyze peptides and metabolites, and determine how they relate to gene expression.” (http://seattletimes.nwsource.com/html/microsoft/2009288622_rosetta020…)

This same announcement goes on to say that vaccine maker Merck will “provide strategic input to Microsoft” as a part of the deal. Merck’s strategy, of course, is to make money by pimping vaccines and pharmaceuticals, including the now-infamous Gardasil vaccine.

Rupert Vessey, the vice president of Merck Research Laboratories, openly admits this deal puts Microsoft in the role of being a drug developer. He says, “We look forward to collaborating with Microsoft to develop new bioinformatic solutions to enable and expedite drug discovery and development…”

This is a key statement to understand, because the term “bioinformatic” can only mean one thing. What stores information in biology? These is only one digital storage system in human biology, and that system is, of course, DNA. Therefore, the idea of developing “bioinformatic solutions” really means to develop “gene-targeting drugs and vaccines.”

This is fully consistent with Bill Gates’ admitted agenda of reducing world population with the help of drug company technologies. At a TED conference, he announced in front of a live audience: “…if we do a really great job on new vaccines, health care, reproductive health services, we could lower [global population] by perhaps 10 or 15 percent.” (http://www.naturalnews.com/029911_vaccines_Bill_Gates.html)

All this comes on the heels of other recent news that Bill Gates is funding sperm-destroying technology to cause widespread male infertility (http://www.naturalnews.com/034834_Bill_Gates_sperm_infertility.html). His foundation has also funded genetically modified mosquitoes and other mad science experiments (http://www.naturalnews.com/030940_Bill_Gates_Foundation_genetics.html).

What’s clear from all this is that Bill Gates is pursuing an agenda of human depopulation. This is a similar agenda of those who pursue eugenics efforts around the globe, including Adolf Hitler and a long list of former FDA Commissioners in the United States. One of the most common ambitions of those in the highest positions of power, it seems, is to cull the human population and eliminate “the little people,” leaving only a “master race” of supreme beings.

Even major universities around the globe are now teaching students that human beings are evil for merely being alive and exhaling carbon dioxide, and that killing off humans is “green” for the planet.

In order to kill off large swaths of human beings, the most efficient mechanism to use is a self-replicating, gene-targeted bioweapon. Microsoft’s Amalga Life Sciences technology, purchased from vaccine developer March, theoretically provides a viable platform to develop precisely such bioweapons. It is interesting that no announcements from the company appear to have been made since being acquired by Microsoft in 2009, indicating that their work is now being conducted in total secrecy, behind closed doors.

Recent headlines reveal that the United States government has also secretly funded bioweapons research that resulted in the development of super-deadly flu strains that could wipe out far more than just 15 percent of the human population. As revealed in recent news headlines:

“Scientists agreed Friday to a 60-day moratorium on research into a modified avian flu virus that has been demonstrated to be more transmissible among mammals. Although the investigators believe their research has a public health benefit, they acknowledge the fear of some governments and others that the genetically altered virus could escape from labs and infect people.” (http://www.philly.com/philly/health/news/HealthDay660965_20120120_Res…)

That may be precisely the point, it turns out. There is no better way to promote the vaccine profits of the pharmaceutical industry than to actually release an engineered bioweapon virus into the wild. And there is no faster way to reduce the world population than to engineer either a vaccine or a weaponized flu virus that burns through the human population, targeting those of an “undesirable” genetic profile who need to be “cleansed” from the human gene pool.

This about this the next time you think about purchasing Microsoft Office, Windows or some other Microsoft product. By doing so, you are funding what could very well be a global eugenics agenda with the ultimate goal of wiping out a significant proportion of the human race.

How to recover from vaccine damage –

Bill Gates: One of the World’s Most Destructive Do-Gooders?

Gates’ latest plan is to try to end world hunger by growing more genetically modified (GM) crops. He’s already invested $27 million into Monsanto Company—leading some countries to reject his charity due to the high risks, such as:

We already know how deeply entrenched the U.S. government has become with Monsanto. For a visual illustration of their ‘revolving-door-relationship’ with the governmental regulatory agencies, see the graph toward the bottom of this article. It is this type of government infiltration that allowed genetically engineered alfalfa to be approved without any restrictions at all, despite the protests of the organic community and public comments from a quarter of a million concerned citizens.

In Bill Gates, Monsanto also has one of the wealthiest and most influential “philanthropists” supporting their agenda and spreading misleading propaganda about their products. …..

2 Responses to “Bill Microsoft Gates – Get Your Shots. Or Get Shot.”