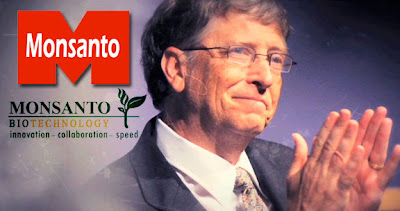 Monsanto shareholder Bill Gates has argued that GMOs are the solution to world hunger, going as far as to say that they are actually needed to fight worldwide starvation.

Unfortunately for Gates, who back in 2010 bought 500,000 shares of the company he is now promoting in mainstream media as the solution to the world’s problems, a team of 900 scientists have found that GMO crops are actually not effective at fighting world hunger.

In fact, the massive team found that Monsanto’s seeds, which have lead to thousands of farmer suicides due to excessive costs and failure to yield crops, were outperformed by traditional “agro-ecological” farming practices.

Funded by the World Bank and United Nations, an organization was created known as the International Assessment of Agricultural Knowledge, Science and Technology for Development (IAASTD).

Quite plainly, the group found that genetically modified crops were not a meaningful solution to the problem. In other words, the expert team showed through rigorous analysis and repeated study that the claims made by Bill Gates are completely inaccurate.

Perhaps what is most compelling, though, is the fact that Bill Gates was fully aware of these findings before going on air to inform the public that GMOs are the solution to world hunger.

The same GMOs that have been linked to organ damage, mutated insects, and a host of other issues.

The findings of the IAASTD regarding the ineffectiveness of GMO crops were published on April 15, 2008. That is long before Bill Gates’ address to the public in late January of this year.

Did Monsanto stockholder Gates ignore this information, or does he believe the 900 scientists to be incorrect? Perhaps the evidence generated from the expert team is not enough. In that case, then Gates should look no farther than the Union of Concerned Scientists.

Another massive research organization, the Union of Concerned Scientists also examined the true yield of GMO crops, only to find that the altered crops do not produce increased yields over the long run — despite their excessive cost and extreme danger to health and environment.

The lack of scientific support behind the GMO crops was so startling to the Union that they documented all the details in a 2009 report entitled ”Failure to Yield.”

GMO crops are not only ineffective at fighting world hunger, but are a genuine threat to public health. Even if they were effective at feeding more individuals than traditional farming practices, would they really want to consume it?

Bill Gates appears to have the interests of massive corporations in mind when perpetuating the myth that GMOs are the answer to fighting starvation.

Intelhub sent in by Mr Low.