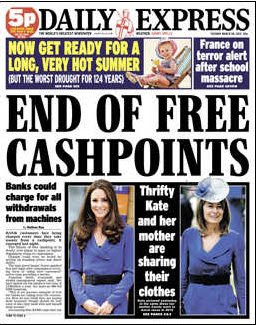 The elites parade their fine dresses, while the peasants are cut off from cash.

The Daily Express reports today that cash dispensers are to be subject to charges, and will no longer be free. This is nothing to do with banks’ profits or costs. They are all in robust health, propped up by outrageous interest charges, while banks themselves can borrow at next to nothing. This is an attack on cash.

They want everyone using electronic money – the credit card, debit card or oyster card. That way anyone can be cut off from money – meaning from food, petrol, water – at a stroke of the keyboard.

The cut-off is already used against political activists. A fellow blogger fired off a story that Abu Hamza was on the MI5 payroll. All his cards stopped instantly, and his mother’s credit card. His phone cut off, and he was left stranded. The bank said they had no idea why his cards were cut, and it wasn’t them doing it. Once cash is squeezed out by charging more and more for ATMs, people will migrate to electronic money, which will be kept cheaper. Anyone who blogs a story they don’t like, won’t be able to eat.

Don’t be squeezed. Go for cash. Keep cash. Help each other to keep cash. The elites want us all subject to their pull switch.

The ultimate goal for them is to have RFID chips implanted in everybody to obtain things.

Your cash supply stored on some computer mainframe/cluster somewhere where your RFID chip (implanted in your arm no doubt) can communicate with it via satelite/wifi communcation for example.

– You go to the shop to buy groceries, ‘simply’ scan your arm across the sensor at supermarket… no more ‘cumbersome’ cash or having to remember your chip and pin number.

– You want to go to the cinema with the kids, ‘simply’ scan your arm across the sensor at the cinema… might as well bung the overpriced aspertame-ridden soft drinks and chemical-laced popcorn on the ‘tab’ too to add to the misery, LOL.

… the list is endless, but ultimately *YOUR* cash is under *THEIR* control.

Note, how movies and adverts on TV condition the masses into softly accepting this notion of a cashless society.

I noticed that VISA are promoting it heavily at the moment. Current TV advert with Usain Bolt. Playing on the sub-conscious linking Usain Bolt’s speed at running with the speed and ‘ease’ of using your mobile or credit card to make electronic purchases… anything but using crisp clean cash.

Also, the film ‘In Time’ with Justin Timberlake is an example. The ‘currency’ is time not money. However the same still applies in that everything is bought and procured through a chip implanted in the arm.

In time (no pun intended), we will no doubt be conditioned more and more into believing that the cashless society is good for us under guise of ‘it prevents money fraud’, ‘terrorism’, and ‘is easy to use’. A PR companies wet dream, I suspect.

10 Responses to “ATM Charges – The War Against Cash”