An inverted cross clearly visible on the Pope’s Throne.

Firstly, thanks to WASP for bringing to our attention the Jesuits and
their very well hidden role in world affairs, from their creation in
1540, right up to modern times. I’m reading The Secret History of the
Jesuits by Edmond Paris, at the moment.

The theory that the Roman Empire – now known as the Holy Roman Empire
(The Vatican, The Holy See) could very well be the real power behind
OWG / NWO, using the Zionists as a front, is backed up by a good deal
of evidence.

First of all, a question regarding the Zionist theory (operating
alone, without the Holy Roman Empire) : Is it reasonable to suppose
that the rulers of the nations of Europe, over the last few centuries,
would just idly sit back and allow the Zionists (Rothschilds et al) to
take over the wealth of Europe and then the New World and the entire
modern commercial world? I just don’t think they would allow that
happen.

Also, there is the involvement of The Vatican / Holy Roman Empire in
the Vietnam War, Second World War and Operation Paperclip. Hitler was
a ‘good Catholic boy’. He called Fr Heinrich Himler S.J ‘my Ignatius’
referring to Ignatius Loyola, the Spanish founder of the Jesuits in
1540.

The following is borrowed from this blogsite:
http://prasutagus.wordpress.com/2011/10/31/cia-the-gestapo-of-the-vaticans-4th-reich/

Most people naively associate the Reich with Nazi Germany. Only a
handful of people know that the Reich is and always has been a realm
of Rome called the Holy Roman Empire (HRE; German: Heiliges Römisches
Reich (HRR), Latin: Imperium Romanum Sacrum (IRS), Italian: Sacro
Romano Impero (SRI)). Because the Reich is a Roman Empire it is
governed by the Vatican.

The Origins of the Vatican’s Spiritual Entity called the SS, borrowed
from this blogsite:
http://prasutagus.wordpress.com/2011/10/31/cia-the-gestapo-of-the-vaticans-4th-reich/

” From 13th Century as the official mark (brand) of the S.S. – Sedes Sacrorum
(HOLY SEE), especially on official documents. Its presence on a
document, design or as part of a uniform has always denoted the object
having the full legal rights and effect of ROMAN LAW–a documented
legal practice for over 700 years.

Since the 17th Century, the mark
“SS.” of the HOLY SEE has been most commonly used on official legal
documents issued under CHARTER for lands ultimately “owned” by the
Vatican. The deliberate fiction created by authors of the earliest LAW
DICTIONARIES that such a mark means “to wit; namely” is generally
regarded as representing neither historic fact, nor sensible
etymological reasoning.

The Legal effect of “SS.” on any document
signed by an individual, particularly where CONSENT is given is to be
treated as a PERSON is to transfer temporal and often “spiritual”
ownership to the “SEE”. The most famous use of the official mark of
“SS.” of the Holy See was an official ensignia of the Papal Army of
the Holy Inquistion also known as the “Knights of the Holy See” or
“Nazi SS”. “

Under Pope Innocent VIII, the role of the Inquisition and Inquisitor
changed to increase their legal and spiritual authority when
despatching “heretics”. Around 1483 Tomás de Torquemada was named
Inquisidor General of Aragón, Valencia and Catalonia.

His torturers and special militia were then blessed with being sworn
into the highest sacred order of the Roman Cult– the SS or the Knights
of the Sedes Sacrorum.

As a military order of the Roman Catholic Church, the Knights of the
Sedes Sacrorum (SS) were bestowed by the legal orders of the Roman
Pontiff on behalf of the Mother Church (Revelation 17:4 ~ “And the
woman was arrayed in purple and scarlet colour, and decked with gold
and precious stones and pearls, having a golden cup in her hand full
of abominations and filthiness of her fornication: 5 And upon her
forehead was a name written, MYSTERY, BABYLON THE GREAT, THE MOTHER OF
HARLOTS AND ABOMINATIONS OF THE EARTH.“) to wage constant Holy
Inquisition against all heretics, including assassinations, torture
and counter-intelligence, to protect the name of the Holy Roman
Catholic Church and directly represent the interests of the Holy See
as its primary order of Holy Knights– the SS (Sedes Sacrorum or Holy
See).

As a spiritual order of the Roman Catholic Church, the SS were
bestowed with the extraordinary Roman Catholic grace of being forgiven
for all their mortal sins (therefore can go to Heaven) that
“unfortunately” must be done in order to observe its temporal orders.
In others words, the troops of the Grand Inquisitor Tomás de
Torquemada were the first religious military order to be granted
“immunity” from Hell by the Pope on account of its acts of torture,
terror and evil.

The last open satanic ritual sacrifices under the Holy Inquisition was
in the early 19th Century. By the beginning of the 20th Century, there
were less than a few hundred SS soldiers still assigned to the Holy
Inquisition. However, upon the appointment of Fr Heinrich Himmler S.J.
in 1929 to the NSDAP in Germany, a new Nazi SS (Knights of the Sedes
Sacrorum) Army of several hundred thousand was created by 1939 to wage
the single greatest Inquisition ever undertaken by the Roman Cult–
with over 18 million innocent people burned alive in ovens in Russia
and Poland. (TAP – exaggeration?)

The German SS were disbanded at the end of World War II, with the
Roman Scroll of the SS being handed to the United States SS (Secret
Service/Sedes Sacrorum) by 1945. The United States SS was officially
created into a military/spiritual force after the assassination of
President William McKinley in 1901. After the staged gun-fight outside
Blair House in 1950, the United States SS have had absolute protection
of the President of the United States, holding him a virtual prisoner
of the State under the guise of official protection.

This is all backed up by The Bible as well. The Bibile predicts that
there are only four empires until the ‘end time’.

(1) Babylonian Empire (repesented by a Lion)

(2) Medo-Persian Empire (represented by a bear)

(3) Grecian Empire (represented by a Leopard)

(4) Roman Empire (represented by the Beast of Revelation, not an animal)

People have been deliberately turned away from Christianity, therefore
leaving us defenceless against the machinations of TPTB. The more
reading and research I do, the more obvious it becomes – the true root
of all the problems we are facing are based in religion /
spirituality.

the battle is for the souls of humanity, between God and Jesus Christ
on one side and Satan and / or Lucifer and the ‘mystry religions’ on
the other side. Marxism is the opposite of Christianity, the
inversion of all values of decency, honesty, humility, humanity, the
family, honour – all the things that make us human and not as beasts.

This is why TPTB are poisoning our food and water supplies as well as
poisoning us morally and spiritually with the filth of the MSM,
television, Hollywood, pornography, etc.

All this is surely why the Jesuits representing the Holy Roman Empire
as the real culprits, has to be the answer and the root of all the
problems humanity is facing.

The first picture is from 2000, The Popes sermon on the mount of
olives. Note the INVERTED CROSS on The Popes throne. 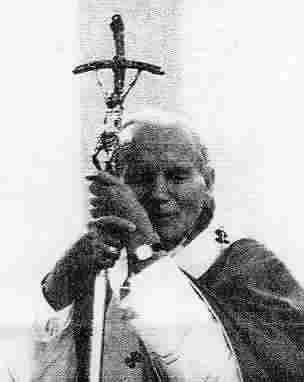 The other two pictures show The Pope with a Broken Cross on his staff.
TAP They’re bent, I think, not broken, Scotty.

“And the woman was arrayed in purple and scarlet color (official
Vatican colors), and decked with gold and precious stones and pearls
(the Vatican is filthy rich), having a golden cup in her hand full of
abominations (the Holocaust, inquisitions, etc.) and filthiness of her
fornication: And upon her forehead was a name written, MYSTERY (very
few people realise where the Catholic religion started), BABYLON THE
GREAT, THE MOTHER OF HARLOTS (who seduce people into their damnable
religion) AND ABOMINATIONS OF THE EARTH” —Revelation 17:4,5

TAP – Powerful finale, Scotty. I can see a new Iain Paisley emerging here! Interesting points you make though, that the SS was nothing new, and Hitler saw them as a Jesuit force.

7 Responses to “Why Does The Pope Display An Inverted Cross – The Sign Of The Anti-Christ?”