Julia‘s been investigating blood groups recently. Here is a link she sent. It is quite long so I’ve lopped off the beginning and middle sections. Man shares blood type with the Rhesus monkey. No other apes have any similarity to our blood. However at some point in history, men arrived in Europe who had no Rhesus-similar (or positive) blood. The Rhesus-negatives have a definite difference in character, physique and are worthy of examination as a group. The final question is where did the Rhesus Negatives come from? 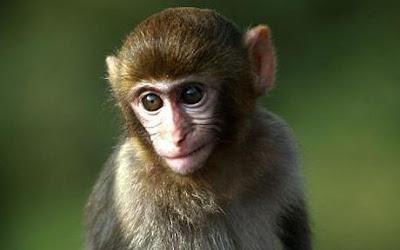 Rhesus Monkey. The closest relative to most humans in the animal kingdom, but not if your blood group is Rhesus Negative.

A very good comparative study between man and the primates can be found in Max Flindt’s book “Mankind, Child of the Stars,” Fawcett publisher, Books 1 and 2. He has documented many of the characteristics we may have received from our cosmic ancestors. It does show quite conclusively that mankind is a hybrid between our cosmic ancestor and our earth ancestor. I have merely carried this idea to its logical conclusion.

If mankind is a hybrid descendant of the ancient’ astronauts, surely there would be some, appearing periodically, who would be genetically very similar to them. Would this not include their psychic powers?

Could the great sleeping prophet, Edgar Cayce, have been one of these? Could Jesus Christ also have been one of these? A true descendant of the ancient astronauts. If he was a true genetic duplicate of them he would also have their powers and possibly their knowledge. I cannot say whether he was born with this knowledge or whether he established psychic communication with our cosmic family, but it is plain that he had powers far beyond those of mortal man.

Could he have been an example of what the ancient astronauts were like? Jesus stated that the Father and him were one. Could he have actually meant that literally? He may have been an exact duplicate of his (our) ancient Father. He may have even been a clone of the cosmonauts. Everyone knows the story of his virgin birth and the heavenly intervention. Could this have been implanting a clone into Mary’s sterilized egg? Could the whole egg have actually been an implant?

The Rh negative blood, which appears not to have originated on earth, may prove to be a major factor in proving mankind is a hybrid. It is not the whole answer but it is a key for unlocking the genetic puzzle of our heritage. Tissue factors will also prove to be quite revealing.

There is an interesting fact found in the book “X-Raying the Pharaohs” by James Harris and Kent Weeks, 1973 (Scribners). Upon x-raying the tomb of Makare, high priestess of Ammon, it was found that the infant buried with her labeled Prince Moutenihet was actually a female hamadryas baboon. An examination of Makare showed she had given birth shortly before dying. Could she have given birth to the baboon found with her? Why else would it have been buried with her? A genetic throwback?

Why is there such a large percentage of negative in these unusual fields? Could we have a vague memory of what we are looking for? It has been said that a question is not asked until the answer is known.

There are about 5000 known blood factors and all of these must contribute to the complete picture. But the Rh negative blood is the place to start our search.

A comparative analysis is now being done and we need your help. If you are reading this, you must be one of the lost children of Israel. Anyone else would not have read this far.

Janet Swerdlow writes to a reader:

Just a question on my bloodline which is kinda interesting I’m half Korean (Siberian base, with the possibility of a little Russian), a quarter Japanese, and a quarter Sicilian – do you know if the alien heritage is in conflict, or if it may explain my unpredictable patterns? I’m O neg. blood – any relevancy? –Angelo

Stewart’s Reply: You cannot look at it as a conflict of alien heritage. Your mind-pattern attracted those genetics. If you are unpredictable, it is because you want to be. You also have to look at the imprinting on your as a child that enhanced this behavior. The negative blood type simply means that there is more Reptilian factor than mammalian and given your East Asian heritage, that is not surprising.

Book of Revelations
Posted: April 14, 2002
Hi Stewart: I am new to your site and am ordering 3 of your books. While I don’t know who’s truth to believe I am open to hearing what everyone has to say on both sides. Please answer these questions. 1). Chemtails are being used to open certain peoples DNA to “expose them”. 2).What blood types and corresponding RH factor are they targeting? 3).Whats the importance of this?

Stewart’s Reply: I have talked about this extensively. Please read through the archives. They are targeting Rh negative factor with 30-40% Reptilian DNA out of the total.

Stewart’s Reply: That is correct. That is because it was written by Eliminate writers. And what is their favorite saying “resistance is futile”. So that is why I emphasize that you must work on your own mind-pattern and not be so concerned with the external world.

Isn’t revelation just an account of a coming battle between two opposing alien races? Thank you.

Stewart’s Reply: On the surface, yes. But it is mostly a battle about left and right-brain function.

The following was published by David Icke
http://www.reptilianagenda.com/research/r110199a.html

The KEY is in the HEART of the CELL.
* FRACTAL Genetic Embedded Information.
* Fractal Structure : Embedding Immortality
SEE : http://www.danwinter.com/gold/index.html

……..you are deeply embedded now.. in the heart.

*Your Rh status describes whether or not you have a protein on the surface of red blood cells. If you don’t have the Rh factor, you’re considered Rh-negative; if you have it, you’re Rh-positive. About 85 percent of people are Rh-positive, though it varies by race. For African Americans, about 90-95 percent are Rh-positive, and for Asians, the figure is 98 to 99 percent. Hmmmm

But, strangely…. a person with type O negative blood is considered to be a “Universal Donor”. It means his or her blood can be given to anyone, regardless of blood type, without causing a transfusion reaction.

The Rh-Negatives Factor is considered a “Mutation” of “Unknown Origin”, which happened in Europe, about 25,000-35,000 years ago. Then this group spread heavily into the area of what is now Spain, England, Ireland, etc.

TAP – Lots of interesting ideas there. Thanks for the link, Julia. I am sure your blood group research will throw up many more such ideas for consideration. Chemtrailing is spraying human blood as well as many toxic substances. Why?

12 Responses to “Where Did Rhesus Negative Blood Originate?”