…has been finished according to the local paper. The temperature of the new borehole is 47 degrees and exceeds that of the Roman Baths! Which is in a hotter spot! The old borehole will be sealed. How does the water get to the Bath Spa then? And what is installed in the chamber underneath the borehole workings? The plot thickens.

BBC admits the baths are in critical condition.

Work has begun in Bath to stop hot springs bursting to the surface and causing its Roman Baths to run dry.

Unless work is done, a geyser up to 26ft (7.9m) high may erupt, diverting water away from the Baths.

Rusting pipe work in an old borehole, which taps into Bath’s springs, has resulted in underground water levels rising close to street-level.

A new borehole will be dug 246ft (75m) below ground to replace the old pipe work and safeguard the springs.

The water that’s coming up now fell 4,000 years ago, you don’t just turn it off like a tap”

David Lawrence
David Lawrence, from Bath and North East Somerset Council, said: “We’ve been working with our partners Wessex Water to sink a new borehole, the present Hetling borehole casing drills directly down into the soft material in which the water gathers.

“The difficulty with that is the well head is not secure in that material, with this solution we will be bedding the headgear into rock.”

The borehole will be drilled at Hot Bath Street, at an angle of 13 degrees, so it intercepts the base of the Hetling Spring.

“The water that’s coming up now fell on the Mendips 4,000 years ago, you don’t just turn it off like a tap,” said Mr Lawrence.

“We want to make sure we don’t lose the hydraulic pressure [of the hot springs] because that feeds the King’s Spring in the Roman Baths, it also feeds the Cross Springs and the Thermae Baths over the road here.”

There is a new borehole being drilled next to the Bath Spa, supposedly for a new posh hotel so that very rich non Bath people will have their own private thermal waters access, which is supposed to be good for all the people of Bath.

The December 2011 information (which matches the information currently on the boards in town at the closed off street), says that it is for the new Gainsborough Hotel, and will be complete by mid Jan 2012! It is still going on.

Additionally it says it will provide new plastic piping to save the Hot Springs, which are starting to sound unbelievably fragile. I mean it can’t be that difficult can it? The water naturally bubbles to the surface, preheated, as it has for thousands of years!

I have previously reported on Trevor Osbourne, who owns the new hotel, and owns Portleven, and is active in Oxford and London doing dodgy Masonic things. There is no development going on at the planned Gainsborough Hotel, yet the water has already gone cold in the spa. 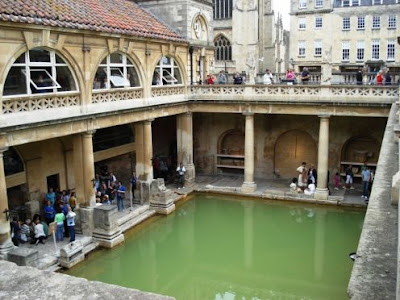 The waters have been hot since Roman times and no doubt for millennia before that. Why are the management saying the waters are cold on days when ‘the heating system is malfunctioning’? What heating system?

TAP – Are they mixing cold mains water with the spa waters to redirect the main flow to the new hotel?

I stumbled on a news item from August 2011 from my local councillors giving completely different reasons for the new borehole, and different funders! Back in August, the borehole was stated as having its main purpose as the replacement of the pipes. There was no other reason given then, no hotel. The council were funding it all back in August.

Now who is paying for it?

A company called YTL. One of those instantly forgettable company names. Quote from Wessex Water, our friendly local utility company, who are doing the work :

“YTL Hotels, the hotel and leisure arm of YTL Corporation Berhad which owns our company, plans to develop Gainsborough Hotel in Beau Street…….”

So the same company that owns Wessex Water and the Gainsborough Hotel project, which is all owned and controlled by the same Trevor Osbourne, is now taking control of the very source of the Hot Springs! This is clearly not for the good of the people.

What I don’t know is why. Do they want to control the inevitable media attention when the Springs go cold? (as I have been pointing out to The Council, they are already going cold) Do they believe that the springs will stay the same temperature once they can control where the heat goes to?

Like I said before, it is amazing the Bath Spa survived the politics and was reopened in the first place. They must know its all going to change this year, as they direct the heat energy to private paying visitors at the expense of the public, all being denied, of course.

Link to my councillors summary of reason for new borehole in August 2011….

And the text is:

A precision operation to replace Bath’s “Hetling Spring” Borehole begins next month as part of the Council’s efforts to protect the heritage of the city’s popular thermal water system. This project falls under one of the sections of Cherry’s Portfolio, being to do with Bath Heritage.

Engineers from Wessex Water, working on behalf of the Council, will create a new borehole for the spring to replace the old pipework which is suffering from corrosion. The replacement borehole will drill down from a vault under Hot Bath Street at an angle of 13 degrees in order to intercept the base of the Hetling Spring at 75 metres below street level.

This is a significant piece of precision engineering commissioned by Bath & North East Somerset Council, which means drilling through 80 metres of ground in order to reach the source. This is the first piece of intervention work to be carried out on the hot springs for over a decade but it is necessary for us to maintain the sustainability of the thermal springs system.

The current Hetling borehole casing is made of mild steel which is rotting. We don’t want an unstable source of the thermal waters as it would threaten the whole spring system by affecting the hydraulic pressure that brings the water to the surface. Therefore it’s vitally important that we carry out these works to preserve the springs as an attraction for residents and visitors.

We’re putting the head gear in one of the vaults under the road so we are presently working with a team of archaeologists to explore the foundations of the vaults under controlled conditions. This is part of our commitment to not only protect the source but also to respect the vaults and the overall heritage of the city.

How the repairs will work:

The drilling rig will be set up in Hot Bath Street – set back a reasonable distance from the Hetling Spring to avoid disturbed geological deposits in the spring pipe – and the borehole will be drilled through a pre-formed access hole in the road.
Steel casings will be progressively installed and grouted to seal the upper layers.
Once the carboniferous limestone aquifer rock is reached, at the base of the Hetling Spring, a plastic pipe will be installed to bring the thermal spring water to the surface.

Upon completion of the drilling operation, the rig will be removed and a permanent access cover will be installed in the road above the vault.

David Lawrence, the Council’s Divisional Director for Tourism, Leisure & Culture, said: “We are liaising with local traders through the Business Improvement District to explain why we have to carry out the work at Hot Bath Street to ensure that the head gear for the borehole can be placed in solid ground rather than soft sediment, as it is at the moment.

“By carrying out the work, Bath & North East Somerset Council is meeting its obligations under the Avon Act 1982 to protect the important source of the water whilst also promoting the use of the spring system and preserving it for future generations.

LINKS TO CURRENT ‘Hotel’ EXPLANATION OF NEW BOREHOLE! As from December 2011

I am coming towards the conclusion that the main purpose of the borehole is to add a pump and a boiler to replicate the heat and force of the springs, so it does not look like they are losing their power. But I don’t think they can do it! That’s why the project has overrun, and why they had a window of time when the Springs were cooling, before they had the new boiler in. Hence they had to put a new extra boiler into the Bath Spa building to bridge the gap.