Hi Tap, I Have some very interesting stuff on More ‘SCUM BAGS’ but due to your slow Internet Connection, I will send it to you when you get back to UK. But for now here is an Article on Abu Ghraib. 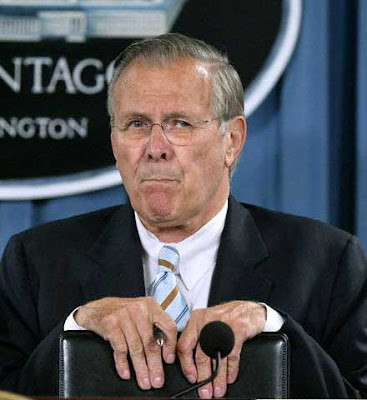 He knew what went on. The only question is will he be held accountable?

Here is another Top Piece of ‘DEPRAVED HUMANITY’ better known as ‘RUMSFELD’ or Donald to his CLOSE ASSOCIATES if he has any, that of course excludes THE BUSH’S, CLINTONS, OBAMA, MAJOR, BLAIR, & BROWN & THATCHER WHO IS ALO ON THE LIST, who are equally as bad , & some far worse than he is. 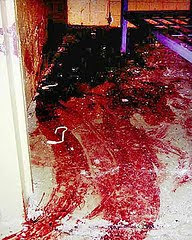 Former Secretary of Defense Donald Rumsfeld has been stripped of legal immunity for acts of torture against US citizens authorized while he was in office.

The 7th Circuit made the ruling in the case of two American contractors who were tortured by the US military in Iraq after uncovering a smuggling ring within an Iraqi security company. The company was under contract to the Department of Defense. The company was assisting Iraqi insurgent groups in the “mass acquisition” of American weapons.

TAP – The point is the American (one world government) government has always armed its ‘enemies’. The Soviet Union. The Vietcong. Hitler. The Taliban. Iraqi Insurgents. There wouldn’t be any wars unless they were manufactured and manipulated into being. The ‘contractors’ supplying the insurgency were contracted to the US government. The problem was once they were found out, they had to be sacrificed to keep the secret closed.

The ruling comes as Rumsfeld begins his book tour with a visit to Boston on Monday, September 26, and as new, uncensored photos of Abu Ghraib spark fresh outrage across Internet. Awareness is growing that Bush-era crimes went far beyond mere waterboarding 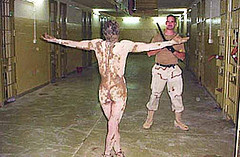 Republican Senator Lindsey Graham told reporters in 2004 of photos withheld by the Defense Department from Abu Ghraib, “The American public needs to understand, we’re talking about rape and murder here… We’re not just talking about giving people a humiliating experience. We’re talking about rape and murder and some very serious charges.” And journalist Seymour Hersh says: “boys were sodomized with the cameras rolling. And the worst above all of that is the soundtrack of the boys shrieking that your government has.”

Rumsfeld resigned days before a criminal complaint was filed in Germany in which the American general who commanded the military police battalion at Abu Ghraib had promised to testify. General Janis Karpinski in an interview with Salon.com was asked: “Do you feel like Rumsfeld is at the heart of all of this and should be held completely accountable for what happened [at Abu Ghraib]?”

Karpinski answered: “Yes, absolutely.” In the criminal complaint filed in Germany against Rumsfeld, Karpinskisubmitted 17 pages of testimony and offered to appear before the German prosecutor as a witness. Congressman Kendrick Meek of Florida, who participated in the hearings on Abu Ghraib, said of Rumsfeld: “There was no way Rumsfeld didn’t know what was going on. He’s a guy who wants to know everything.”

And Major General Antonio Taguba, who led the official Army investigation into Abu Ghraib, said in his report:
“there is no longer any doubt as to whether the [Bush] administration has committed war crimes. The only question is whether those who ordered the use of torture will be held to account.”………….. 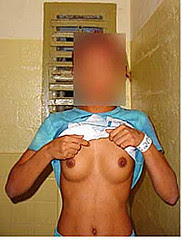 Binyam, Genital-Slicing
Binyam Mohamed was seized by the Pakistani Forces in April 2002 and turned over to the Americans for a $5,000 bounty. He was held for more than five years without charge or trial in Bagram Air Force Base, Guantánamo Bay, and third country “black” sites.

In his diary he describes being flown by a US government plane to a prison in Morocco. He writes:
“They cut off my clothes with some kind of doctor’s scalpel. I was naked. I tried to put on a brave face. But maybe I was going to be raped. Maybe they’d electrocute me. Maybe castrate me…One of them took my penis in his hand and began to make cuts. He did it once, and they stood still for maybe a minute, watching my reaction. I was in agony. They must have done this 20 to 30 times, in maybe two hours. There was blood all over. ‘I told you I was going to teach you who’s the man,’ [one] eventually said.

“They cut all over my private parts. One of them said it would be better just to cut it off, as I would only breed terrorists. I asked for a doctor.

“I was in Morocco for 18 months. Once they began this, they would do it to me about once a month. One time I asked a guard: ‘What’s the point of this? I’ve got nothing I can say to them. I’ve told them everything I possibly could.’

Just by the way this is the Law Suite

BUT NOTHING CAME OF IT Link:-

MADRID/CAIRO: Public inquiries on the decision to wage war on Iraq that are silent about the crimes committed, the victims involved, and provide for no sanction, whatever their outcome, are not enough. Illegal acts should entail consequences: the dead and the harmed deserve justice.

On 6 October 2009, working with and on behalf of Iraqi plaintiffs, we filed a case before Spanish law against four US presidents and four UK prime ministers for war crimes, crimes against humanity and genocide in Iraq. The case presented spanned 19 years, including not only the wholesale destruction of Iraq witnessed from 2003, but also the sanctions period during which 1.5 million excess Iraqi deaths were recorded.

We brought the case to Spain because its laws of universal jurisdiction are based on principles enshrined in its constitution. All humanity knows the crimes committed in Iraq by those we accused, but no jurisdiction is bringing them to justice. We presented with Iraqi victims a solid case drawing on evidence contained in over 900 documents and that refer to thousands of individual incidents from which a pattern of accumulated harm and intent can be discerned.

When we brought our case, we knew that the Spanish Senate would soon vote on an amendment earlier passed by the lower house of parliament to curtail the application of universal jurisdiction in Spain. …………

One more jurisdiction to fall

Despite submitting a 110-page long referenced accusation (the Introduction of which is appended to this statement), the Spanish public prosecutor and the judge assigned to our case determined there was no reason to investigate. Their arguments were erroneous and could easily have been refuted if we could have appealed. To do so we needed a professional Spanish lawyer — either in a paid capacity or as a volunteer who wished to help the Iraqi people in its struggle for justice. As we had limited ……….

Remembering that the Invasion was Launched on a False Flag, I think they probably have a valid case, for investigating, don’t you?

We continue to believe that the violent killing of over one million people in Iraq since 2003 alone, the ongoing US occupation — that carries direct legal responsibility — and the displacement of up to a fifth of the Iraqi population from the terror that occupation has entailed and incited suggests strongly that the claims we put forward ought to be further investigated.

At present, failed international justice allows US and UK war criminals to stand above international law. Understanding that this constitutes an attack — or makes possible future attacks — on the human rights of everyone, everywhere, we will continue to advocate the use of all possible avenues, including UN institutions, the International Criminal Court, and popular tribunals, to highlight and bring before law and moral and public opinion US and UK crimes in Iraq. …………….

The worst of the worst is that Rumsfeld’s logic strikes directly at the foundations of our democracy and the legitimacy of the War on Terror. The torture methods studied and adopted by the Bush administration were not new, but adopted from the Survival, Evasion, Resistance, and Escape program (SERE) which is taught to elite military units. The program was developed during the Cold War, in response to North Korean, Chinese, and Soviet Bloc torture methods. But the aim of those methods was never to obtain intelligence, but to elicit false confessions. The Bush administration asked the military to “reverse engineer” the methods, i.e. figure out how to break down resistance to false confessions.

Appallingly, this could explain that even photos such as those of feces-smeared prisoners at Abu Ghraib might not, as we would hope, be only the individual work of particularly demented guards, but part of systematic degradation authorized at the highest levels. 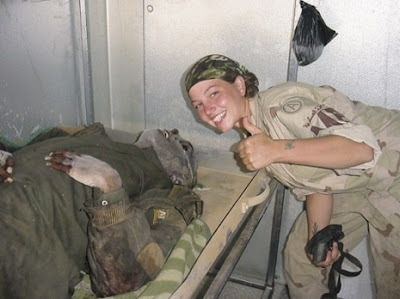 This could go far toward explaining why the Bush administration seemed so tone-deaf to intelligence professionals, including legendary CIA Director William Colby, who essentially told them they were doing it all wrong. A startling level of consensus existed within the intelligence community that the way to produce good intelligence was to gain the trust of prisoners and to prove everything they had been told by their recruiters, about the cruelty and degeneracy of America, to be wrong.

THE IMAGES SHOWN ARE NOT AS BAD AS SOME THAT ARE CIRCULATING!

Read of more US Crimes against Humanity :-

Welcome to Boston, Mr. Rumsfeld. You Are Under Arrest
– by Ralph Lopez – 2011-09-20
Former Secretary of Defense Donald Rumsfeld has been stripped of legal immunity for acts of torture against US citizens authorized while he was in office.

Make No Mistake, NATO is Committing War Crimes and Crimes against Humanity in Libya
– by Mahdi Darius Nazemroaya, Julien Teil, Mathieu Ozanon – 2011-08-28
Expose the lies. This GRTV video was produced in Libya by a team of committed journalists, researchers and cameramen that are witnesses to NATO’s war crimes.

Denial, Selective Perception and Military Atrocities.
– by Felicity Arbuthnot – 2010-09-22
It was under the watch of his father, George Bush, Snr., that in 1991, thousands of Iraqi conscripts were buried alive in southern Iraq…

EXTRACT – An Abu Ghraib Military Intelligence e-mail, dated 17th August 2003, reads of the prisons inmates: “The gloves are coming off . . . Col. Boltz has made it clear that we want these individuals broken.”(9)

In fact the 6th March 2003, Defense Department “Working Group Report on Detainee Interrogations in the Global War on Terrorism” requested by Donald Rumsfeld, read: “In order to respect the President’s inherent constitutional authority to manage a military campaign, (prohibition of torture) must be construed as inapplicable to interrogations undertaken pursuant to his Commander-in-Chief authority.” On 20th March Iraq was illegally invaded and in April: “Rumsfeld issues a final policy approving twenty four special interrogation techniques, some of which need his permission to be used.”(10) With yet again, so little regard for international law or the U.S., Constitution, at the top, it is little wonder there is often either scant or none for either, leading to a culture of depravity down the chain of command..

Law Suit against 4 US Presidents & 4 UK Prime Ministers for War Crimes, Crimes Against Humanity & Genocide in Iraq
– by Brussells Tribunal – 2010-02-10
Statement on Closure of Legal Case for Iraq in Spain

7 Responses to “The Torture Machine Now Targeted On American Citizens”