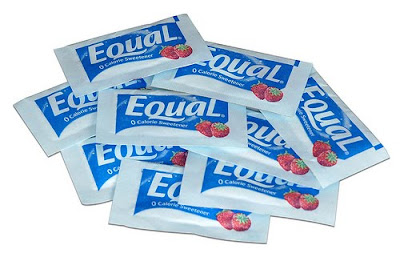 Neotame – fully the Equal of aspartame for poisoning human beings.

(NaturalNews) It could be lurking in the foods you eat every single day, including U.S. Department of Agriculture (USDA) certified organic foods, and you would never even know it. The U.S. Food and Drug Administration (FDA) has declared that one of Monsanto’s latest creations, a synthetic sweetener chemical known as neotame, does not have to be labeled in food products, including even in organic food products.

A modified version of aspartame with even more added toxicity, neotame received quiet and unassuming FDA approval back in 2002, even though no safety studies have ever been conducted on the chemical (http://www.neotame.com/pdf/neotame_fda_US.pdf). In fact, an investigation conducted by Feingold.org found only four studies relating to neotame in the MEDLINE database.

Two of these “studies” were not studies at all, and the other two were actually one duplicate study conducted by NutraSweet, the company that produces and sells neotame.

So just like with aspartame, the FDA has once again approved for use a dangerous sweetener chemical that metabolizes into formaldehyde when consumed. Except this time, the chemical contains added 3-dimethylbutyl, which the U.S. Environmental Protection Agency (EPA) has listed as one of the most hazardous known chemicals, and it does not have to be labeled on any of the products to which it is added.

“Neotame has similar structure to aspartame — except that, from it’s structure, appears to be even more toxic than aspartame,” writes HolisticMed.com on its page about neotame. “Like aspartame, some of the concerns include gradual neurotoxic and immunotoxic damage from the combination of the formaldehyde metabolite (which is toxic at extremely low doses) and the excitotoxic amino acid” (http://www.holisticmed.com/neotame/toxin.html).

The FDA, the European Food Safety Agency (EFSA), and the World Health Organization (WHO) all consider neotame to be safe for use, despite the fact that WHO actually published a paper seeking to establish acceptable daily intake levels for neotame. If neotame is so safe that it does not even have to be labeled, according to the FDA, then why do acceptable daily intake levels have to be established? And what is the point of establishing them in the first place?

This dog and pony show of special interest regulatory corruption is a travesty that will have global negative health consequences. Like most other toxins added to foods, neotame will most likely cause chronic damage over a long period of time, which means mainstream health authorities will get away with never having to admit that neotame is a dangerous toxin.

5 Responses to “Neotame the next aspartame? FDA doesn’t require labeling of latest chemical sweetener from Monsanto”