This past week has been a very turbulent time for Italy. It wasn’t just the grounding of the Concordia cruise ship by a playboy captain; but the grounding of the country by Euro-technocrat usurper Mario Monti, trying to impress his Keynesian buddies with his latest attempts to ‘Save Italy’! 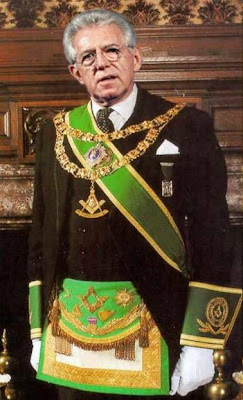 Mario Monti, Italy’s appointed Prime Minister, and member of the European Council of Foreign Relations is running the place for ‘the boys’. The ‘familia’ in Sicily is none too impressed.

This week saw the launch of a popular uprising in Sicily, by a group known as the ‘Movimento dei Forconi’ or ‘Pitchfork Movement’. This is not an uprising of self absorbed youth who want more government handouts; but of producers who are being pushed into poverty by government taxes and regulation. The organizers are middle aged and older; this is significant, as most power and wealth is held by this generation and they have now drawn a line in the sand.

On the 16th of January these protesters began “Operazione Vespri Siciliani”, a blockade of the Island of Sicily. Within two days the transportation of all goods was stopped. Over the next week, nothing entered or exited Sicily. This was no mean feat given that Sicily is not a small Island; it has a population of over five million people and a surface area of 25,711 km2.

These are some of their demands:

The arrest of all corrupt politicians.
To reduce the number of parliamentarians
To remove the provincial bureaucracy, as most of these politicians have been there for over forty years.
To drastically cut the salaries and privileges of parliamentarians and senators
To restrict politicians two only two terms in office
Not one of Darth Monti’s “austerity” measures has touched the political caste; in fact in classic Italian style, the press has dug up some very dirty scandals concerning two of his fellow tax-feeders.

The trigger for these events was the vampire state sinking it’s fangs deeper into the already hampered Italian economy; a vicious tax was added to petrol, diesel and other energy sources in December.

Though agriculture contributes only 2.5% of GDP, in the southern regions of Basilicata, Calabria, and Molise, agriculture accounts for just over 20 percent of local employment. Many goods are transported by road, and as the cost of transport went through the roof within the time frame of just a few weeks, it destroyed the farmer’s tight margins. Why work when the state steals most of your profits?

To further understand the rage, despair and humiliation it is necessary to know some Sicilian history. As Jeff says, it’s all been done before.

In the year 1282 the War of the Sicilian Vespers was fought by the Sicilians against the French aristocracy that ruled Sicily at the time. This uprising was ignited by excessive taxation and mismanagement by the French. Fast forward to 1859; Sicily was part of the Kingdom of Two Sicilies. At the time it was the richest kingdom in the Mediterranean and its capitol Napoli was one of the most renowned and cultured cities in the world.

Then in 1860, The House of Savoy, rulers of the Kingdom of Italy, decided to liberate the south from their ‘brutal’ oppressors. The newly “liberated” soon realized that they were tax slaves to yet another foreign power. This necessitated the stationing of 200,000 troops in the south to prevent further rebellions. One could say that this occupation still exists today, as no Italian troops are ever garrisoned in their home regions.

After a hundred and fifty years the south is still suffering the effects of this occupation, but now the roles have been reversed; the wealth of the north is confiscated by Rome to bribe subsidise the corrupt politicians of the south. This is one of the reasons why Lega Nord is so popular in the North.

It will be interesting to see what happens next, as the protests are soon moving to Rome. This is not necessarily a positive move, as every political movement (eg. Lega Nord) that has gone onto Rome, has been bought off and betrayed their ideals. Over the past week, the establishment, including the unions have been deeply humiliated and lost a lot of credibility. There has been very little media coverage; the news still has to breach the international mainstream media (MSM) ‘Firewall’.

As Italy falls deeper into depression, the establishment will lose further credibility; regional movements such as the Forconi will multiply, putting further pressure on the State. This could well be the beginning of the end for the Italian state as Darth Monti’s taxes push more people unto the street.

For those who want to follow this story, you can use #Forconi hashtag on twitter. There are a few English speaking writers who are reporting from Sicily.

TAP – The word MAFIA comes from Sicily. It was secret society that was set up to kill members of the French army of occupation. ‘Morte Alla Franchesi Invasiones Assassini’, which translates ‘death to the invading French assassins.’ How come they ended up running all the casinos in Las Vegas? That’s another story…

A small town in central Italy has declared its independence and started to print its own banknotes.

The authorities in Filettino, 100km (70 miles) east of Rome, are protesting against austerity measures.

It has only 550 inhabitants and under new rules aimed at cutting local administration costs it will be forced to merge with neighbouring Trevi.

Town mayor Luca Sellari, who stands to lose his job because of the eurozone crisis, came up with the idea.

He created his own currency, called the Fiorito. Banknotes have his head on the back, and they are already being used in local shops and being bought as souvenirs by tourists who have started to throng the normally quiet streets.

The mayor says there is enormous enthusiasm about declaring the independence of the new principality.

There has been such an outcry by small towns across Italy at the government move to abolish local councils and merge them with larger towns that Prime Minister Silvio Berlusconi’s coalition may be forced to backtrack.

In the meantime the new Principality of Filettino – complete with coat of arms and website – is suddenly enjoying international fame.

TV stations from as far afield as Russia have been running news features about Filettino.

After all, the mayor says, Italy was once made up of dozens of principalities and dukedoms. As he says, the landlocked republic of San Marino still manages to survive, so why not Filettino?

13 Responses to “Italy Is Revolting”