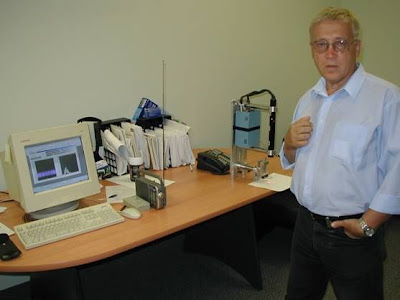 This is translated from Russian and I’m still just grappling to understand it all. I post it to give you the opportunity to know what I’m looking at early, in case you can grasp and summarise the essentials quicker than me.

TAP – I am content to just read and try to visualise what is being explained here.

//The history of wave genetics has been developing for more than 80 years. In 20s and 30s of the last century Russian scientists, A G Gurwitsch and A A Lubishev postulated that not only does genetical apparatus of living organisms on the Earth operate at material, physical level but also at certain waves/fields level and is able to transfer genetic data/information via electromagnetic (EM) and acoustic waves. The science has recently taken a major leap in its advancements of the theory and reproducible experiments and thus the theory of wave genome has been put forward.//

//These principles allowed us to design and create a quantum bio-computer essential element of which is a specially tuned laser beam with certain wavelength and frequency characteristics.

The quantum bio-computer can perform:

i. Scanning and reading the wave/field equivalent of the genetical-metabolic data from the (stem) cells, tissues, organs of a donor’s bio-system employing photon of the laser beam;

ii. Conversion of the photons obtained into wide-wavelength-band preserving the scanned and read data;

iii. Precise and pointed introduction of such scanned and converted principal/dominant data radio waves into the organism-recipient, located at a certain distance from the donor’s bio-system (from few centimeters to 20 km);

iv. Strategic control/management of metabolism and postembryonic morphogenesis of the organism-recipient according to two vectors/modes:

a. “Do as/what I do” – that is holographic principle, and

b. Wave/field transmission of a signal that contains commands activating required programs in the stem cells of, for instance, rats; programs that direct/guide the stem cells development on their way of, as in our experiments, building pancreas gland in rats. These vectors/modes are intended to be used on humans.//

“Testimony regarding the recovery of my daughter Alice July from Cystic Fibrosis via the application of Linguistic Wave Genetics.

Please read this important letter – not enough space in this comment box.