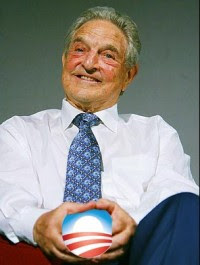 “The main obstacle to a stable and just world order is the United States.”—George Soros

George Soros isn’t the world’s pre-eminent “malignant messianic narcissist,” but he’ll do until the real thing comes along. Move over, Hitler, Stalin, Mao, and Pol Pot. There’s a new kid on the block.

Is it possible to lay the global financial meltdown, the radicalizing of the Democratic Party, and America’s moral decline, at the feet of one man?

What we have in Soros, is a multi-billionaire atheist, with skewed moral values, and a sociopath’s lack of conscience. He considers himself to be a world class philosopher, despises capitalism, and just loves social engineering.

Uh oh. Can you say “trouble,” boys and girls?

Soros is a real life version of Dr. Evil — with Obama in the role of Mini-Me, which is not as humorous as it might at first sound. In fact, it’s bone-deep chilling.

György Schwartz, better known to the world as George Soros, was born August 12, 1930 in Hungary. Soros’ father, Tivadar, was a fervent practitioner of Esperanto—a language invented in 1887, and designed to be the first global language, free of any national identity.

The Schwartz’s, who were non-practicing Jews, changed the family name to Soros, in order to facilitate assimilation into the gentile population, as the Nazis spread into Hungary during the 1930s. Soros is an Esperanto word meaning “to soar.”

In 1944 Hitler’s henchman Adolf Eichmann arrived in Hungary, to oversee the murder of that country’s Jews. The Soros children were all given fake identity papers, and were shipped out to various Christian families. George Soros ended up with a man whose job was confiscating property from the Jewish population. Soros went with him on his rounds.

Soros has repeatedly called 1944 “the best year of his life.”

During an interview with “Sixty Minute’s” Steve Kroft, Soros was asked about his “best year:” …………..

Soros also told “The Australian” that the world financial crisis was ”stimulating” and “in a way, the culmination of my life’s work.”

My point here is that Soros is a planetary parasite. His grasp, greed, and gluttony have a global reach. ………..

n 1997 Soros almost destroyed the economies of Thailand and Malaysia. At the time, Malaysia’s Prime Minister, Mahathir Mohamad, called Soros “a villain, and a moron.” Thai activist Weng Tojirakarn said, “We regard George Soros as a kind of Dracula. He sucks the blood from the people.” (Source)

The website Greek national Pride reports, “[Soros] was part of the full court press that dismantled Yugoslavia and caused trouble in Georgia, Ukraine and Myanmar [Burma]. Calling himself a philanthropist, Soros’ role is to tighten the ideological stranglehold of globalization and the New World Order while promoting his own financial gain. He is without conscience; a capitalist who functions with absolute amorality.”

Do you get the feeling that American taxpayers are being treated like gullible suckers? ………………..

(By the way, if you want a short primer on Far Left economics—and a great cartoon from a 1911 St. Louis Post-Dispatch—go to actor Michael Moriarty’s website). ……………..

Some of the many NGOs (Non Government Organizations) that Soros funds with his billions are: MoveOn.org, the Apollo Alliance, Media Matters for America, the Tides Foundation, the ACLU, ACORN, PDIA (Project on Death In America), La Raza, and many more. For a more complete list, with brief descriptions of the NGOs, go to DiscoverTheNetworks.org. …………

The words of Patrick Henry are apropos: “Is life so dear, or peace so sweet, as to be purchased at the price of chains and slavery? Forbid it, Almighty God! I know not what course others may take, but as for me, give me liberty, or give me death!”

These days, Patrick Henry’s sentiment is more than just some quaint hyperbole from long ago—it’s a slow burning, but intense, glow that fires our courage and heart.