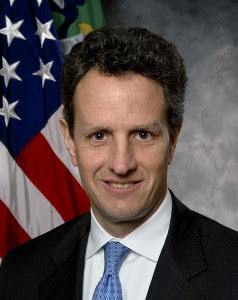 UPDATE – This from Benjamin Fulford via a reader on Youtube.

Berlusconi was arrested and is singing like a canary. The collapse of the Satanic worshipping financial mafia is accelerating. Geithner was released but is accompanied at all times by an armed deputy to prevent him leaving the USA. Geithner has already admitted that he and Obama work for George Bush. Many more fascinating details.

ORIGINAL POST.
This afternoon we received a phone call informing us that their were reports Treasury Secretary Timothy Geithner was arrested, questioned and released by New York Police February 24, 2012. The caller informed us that they were unable to find a single mention of the “reported” arrest on any of the mainstream media outlets websites. After performing a simple Google search we came across a number of “blog” reports claiming Secretary Geithner was arrested in New York, was questioned and then released. Rather than attempt to contact the individual blogs which made the claims, we contacted the Department of the Treasury Press Office.

Speaking with a Ms. Mock in the Treasury Departments Press Office (All media inquiries should be directed to the Press Office at (202) 622-2960) who stated, “Can I ask you to email your request to Natalie Wyeth, as I cannot make any comment on your request. If you would email your request for comment to natalie.wyeth@treasury.govyour request will be resonded to faster.” We did as Ms. Mock requested and sent the below email to Ms. Wyeth who is listed on the Treasury Departments site as “Deputy Assistant Secretary, Public Affairs (International Affairs, Illicit Finance and Enforcement, Tax and Budget, and Economic Policy)”

Can you confirm or deny these reports? If the reports are true can you comment on the reasons Secretary Geithner was arrested?

Despite our timely response to Ms. Wyeth’s request for the reports to be sent her, she did not respond confirming or denying the reports. We find the Treasury Departments inability to comfirm or deny a very straight forward report somewhat disheartening coming from an adminstration which has repeatedly portrayed itself as being the most transparent administration in US history.

While the Treasury Department has neither confirmed or denied the report Secretary Geithner was arrested on Feb 24, 2012 we will continue to seek formal confirmation or denial of the report.