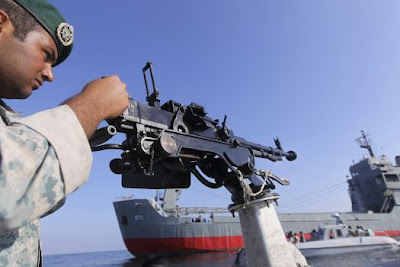 Confirming Gordon Logan’s indications, WASP writes that we should be expecting a false flag attack on an American warship in the Gulf.

Former Israeli intelligence officer Avi Perry writes that a “surprise” Pearl Harbor-style Iranian attack on an American warship in the Persian Gulf will provide the pretext for the US to launch all-out warfare against Iran.

Given the fact that former Vice President Dick Cheney’s office openly considered staging a false flag attack on a US vessel in the Persian Gulf to blame it on Iran as a pretext for war, Perry’s summation of how “2012 will see to a new war,” cannot be taken lightly.

Under the headline ‘The looming war with Iran‘, Perry writes;

Iran, just like Nazi Germany in the 1940s, will take the initiative and “help” the US president and the American public make up their mind by making the first move, by attacking a US aircraft carrier in the Persian Gulf.

{WASP : But will this be a False Flag}

The Iranian attack on an American military vessel will serve as a justification and a pretext for a retaliatory move by the US military against the Iranian regime.

The target would not be Iran’s nuclear facilities. The US would retaliate by attacking Iran’s navy …………….

Elimination of Iran’s nuclear facilities? Yes. This part would turn out to be the final act, the grand finale. It might have been the major target, had the US initiated the attack. However, under this “Pearl Harbor” scenario, in which Iran had launched a “surprise” attack on the US navy, ……………

Perry’s use of quotation marks around the word “surprise” comes across as a literary device to imply that the so-called “surprise” attack will not be a surprise at all. ………….

PEARL HARBOUR
Released Freedom of Information Act files prove that weeks before the December 7 attack by the Japanese, the United States Navy had intercepted eighty-three messages from Admiral Yamamoto which gave them details of precisely when and where the attack would take place.

It’s also completely nonsensical that Iran would actively seek to provide the world’s pre-eminent nuclear superpower with an easy excuse to justify an attack by deliberately targeting US warships in the Persian Gulf. Perry’s article seems to be a tongue-in-cheek admission that the US or Israel will manufacture such an attack.

This presumption need not delve into the murky realm of conspiracy theories – history tells us that fake naval attacks have been staged on numerous occasions to hoodwink the American people into supporting wars of aggression. ……………

Remember the Maine? The battleship USS Maine blew up while it was stationed in Havana harbor in February 1898. Although a Navy investigation could not find the cause of the explosion, the American media, led by pioneer of “yellow journalism” William Randolph Hearst, immediately blamed Spanish saboteurs, whipping the public into a war fever.

When Hearst sent his reporter Frederick Remington to investigate, little of note could be established about the disaster. When Remington asked to be recalled, Hearst told him, “Please remain. You furnish the pictures, I’ll furnish the war.” ……………

The January 2008 Strait of Hormuz incident taught Cheney and other administration insiders that, “If you get the right incident, the American public will support it”. Hersh said: “There were a dozen ideas proffered about how to trigger a war. The one that interested me the most was why don’t we build, we in ‘our shipyard’, – build four or five boats that look like Iranian PT boats. Put Navy seals on them with a lot of arms.

Given the dangerous nature of overlapping Iranian and US/Israeli naval drills set to take place in the same region at some point within the next two weeks, the potential for another staged incident at sea that will be exploited as a pretext for war remains a potent threat.