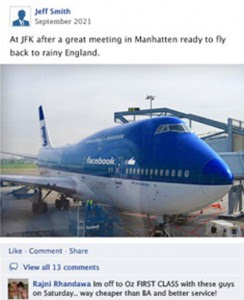 TAP – The future of Facebook. Airlines. Currency. The only marketing problem is the subconscious association between the name Facebucks and Starbucks. That’s why they’re opting to call the currency Facebucs, dropping the K! Facebook Timeline, just launched, claims facebucs will become the world’s third largest currency.

Link tweeted by Tap follower Alexander Jarvis –
Really nice infographic here from Liverpool-based digital agency Ph Creative entitled “A Look Into the Future of Facebook 2012-2025″. It follows the design of Facebook Timeline, looking chronologically at the key areas of growth and power Facebook could potentially move into over the next decade and a half.

There is some fun speculation here.

TAP Facebook is CIA. This is not fun. This is a plan for totalitarian world control, which you create by clicking yourself into it. See family horror story below where social workers monitored a family’s Facebook communications and threatened them with jail for talking to each other.

Some bit sounds more plausible than other bits. For instance the launch of Facebook search engine, which sounds not at all far fetched, compared to a Facebook currency called Facebucs, which becomes the world’s third largest.

Facebook is predicting 1.1bn users by 2014, which again sounds about right if even too far in the future.

Then of course comes along Facebook Air, Zuckerberg’s very own airline. 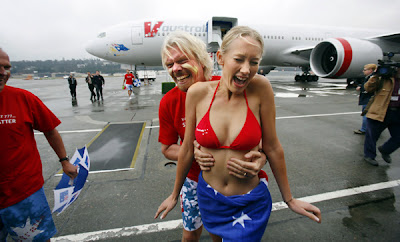 This is how it’s done!

Again, why not? Who would have thought a basement record store started by a man called Richard Branson would spawn such an empire and it is that Brit who seems the model for some of Facebook’s future projected growth.

TAP – Branson has always made moves as ‘requested’ by TPTB rather than follow his own business intuition (after his early music successes, at least, when he was young and not risk-averse and had nothing to lose). How else do you get slots at Heathrow airport? Virgin was an attempt to create a totalitarian business model, transferable across all markets. It hasn’t really worked. Virgin Cola hardly a success. Virgin Trains the death knell of the Virgin brand, with mobile and finance suffering the consequences.

Branson did as he was bid and still appears as the youthful bearded genius, who is in fact a puppet of the elites, but that’s another story…just as Zuckerberg is floated, when in fact he had a soft $500,000 loan from a CIA-backed bank.

Facebook Timeline is the next attempt at a totalitarian business model. How much easier to get the world to sign up voluntarily for its own enslavement than clap everyone in irons.

TAP It’s when these brands move out of their original spheres, as Virgin did, that the trouble starts. Facebook Timeline is probably going to end up in the same kind of muddle as Branson’s Virgin. Is Facebucks about coffee, online social chat, mortgages or what? I’m confused.

TPTB are so keen on ending the role of nation states that they think we’ll all be happy loading and unloading currency online direct from the CIA. When will peoples’ instincts kick in and they’ll realise that the financial basis of their lives is under threat? I would say they have already done so, and will do so from hereon on an increasing basis. Facebucks be damned..

Sometime this week, in a case which promises to make legal history, a mother may be sent to prison, apparently because her teenage children – two of whom are in foster care for reasons which, I am told, had nothing to do with her treatment of them – have been chatting to each other on Facebook.

This landmark case, which says much about the surreal state of our family protection system, arose from a judicial order last year that the mother must not talk to her children on Facebook, even through “a third party”. The two girls were taken into care a few years back for their own protection, I am told, not because of any actions by their mother but because their safety had been threatened by members of a gang on the inner-city council estate where they lived. After being sent to a foster home in another part of the country, they eventually managed to make contact through Facebook with their brothers and a cousin, all of whom are still living with their mother in the family home.

Once contact had been established between the younger members of the family, the mother joined in – until this came to the notice of social workers in the city where the family originally lived. This led to the judge’s order last year that the mother must have no further contact with her daughters, an order which she obeyed – even though her girls had repeatedly been told that she no longer loved them. (Thanks to what they had been told by their brothers on Facebook, they knew this to be untrue.)

The children, however, continued to chat to each other, and this was picked up by social workers who were monitoring their exchanges on Facebook. This has led to the mother being summonsed to attend a family court, in a city 100 miles away from where they now live, under threat of imprisonment for breaching the court order.

If the judge sentences the mother, it will have a hugely detrimental effect on the lives of the three children who live with her, Her two sons have already had enough disturbance to their lives, having themselves spent time unhappily in care (again for reasons which, I am told, had nothing to do with their mother’s treatment of them but with the behaviour of a now long-absent partner). They were eventually allowed by the social workers and courts to return to live with her, as was their cousin, who had also been in care.