I asked Me to summarise David Wilcock‘s work and explain his world view. His site is Divine Cosmos, and it has some very interesting ideas.

Here is Part One.

The research of David Wilcock is an entire world view so this is an holistic post which introduces new information on many subjects. This explains why it is long and “full spectrum”.

It is far from the full extent of what he has to say. For that you need to buy his recent book “”Source Field Investigations: The Hidden Science and Lost Civilizations Behind the 2012” where he spells it all out. You can also watch his presentations on youtube, such as Event Horizon. Youtube: v=9zAMdYC80sE

David Wilcock has shown us friendly ETs have been sending us messages in CROP CIRCLES using the language of geometry and mathematics about a coming DNA transformation. The complex crop circles are man-made – but not by humans from Earth (more on that later. BTW I think he believes in Positive-ET and Negative-ET [phrase copyright – Me.]) 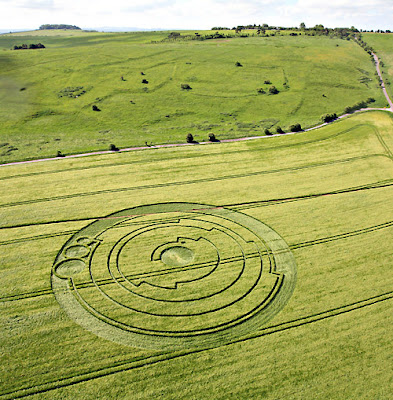 The message David Wilcock has found dates back to 1980s but he believes the messages have been coming for over 1000 years. One of the first mentions of crops circles entered the historical record in 815 AD, an edict from Archbishop of Lyons to stop locals taking seeds from crop circles created by ‘cloud ships’ for their rituals.

One of the first researchers to investigate crop circles was a Dr. Robert Plot. In his “Natural History of Staffordshire” he drew diagrams of crop circles showing the geometry associated with crop circles existed in the late 17th Century – full circles, spirals, circles with squares.

Dr. Plot discovered the soils under the crop circles were looser and drier than under the surrounding crops, and there was a white “hoar” which had been left behind. This is something that Dr. Gil Levengood was to later document in the 1990s.

Before I reveal the message David Wilcock has found in the modern era crop circles I must first re-introduce crop circles as a serious subject as there has been disinformation, stirred by media and shamelessly self-promoting crop circle entrepreneurs that do promotional work for newspapers and corporations, that all circles are hoaxed. The readers must be educated that there is a difference between real and fake crop circles.
(Read Freddy Silva’s analysis : http://www.cropcirclesecrets.org/circlemakers.html)

Fake
– rough bed of crops (stalks not completely flattened) trampled over and with broken stalks.
– trodden paths that connect between unconnected circles (necessary if it’s not constructed from above. hoaxes try to avoid separate circle formations)
– it is a small scale work – this minimises error and means it can be done quickly, without being spotted. 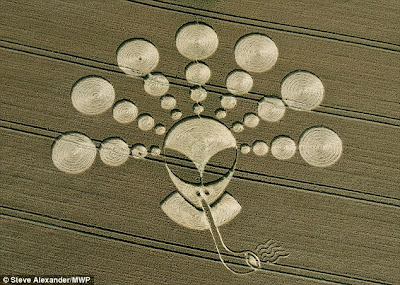 Real
– a smooth carpet of stalks that often have been smoothly “bent” flat without breaking
– no human ‘sheep trails’ between circles – it was made from above
– the work is often on a vast scale – surveyors have said of one 900ft formation that it would take 5 days to complete
– the design subject is non-trivial
– highly complex geometric designs, perfectly executed, which encode physical and mathematical properties of the universe. http://plus.maths.org/latestnews/may-aug08/cropcircles/cropcircle.jpg

– ground under crops is drier than surrounding field due to water uptake in the circle-making process – presumably to stop the crop burning. True crop circles are usually formed over a water source, such as an underground aquifer.

For example of the level of complexity in the modern circles, which distance themselves from the fakes, ” one ‘spider’s web’ crop circle encodes Hawkins’ Fifth Theorem – part of a series of new mathematical theorems discovered in crop circles. These are based on the works of Euclid, yet these theorems are missing from Euclid’s thirteen Treatises on Mathematics- the foundation of our system today. Additionally, this design is encoded with diatonic ratios- mathematical fractions fundamental to the music scale, and the chances of anyone hitting these by accident are one million to one”.
Freddy Silva: http://www.cropcirclesecrets.org/circlemakers.html) 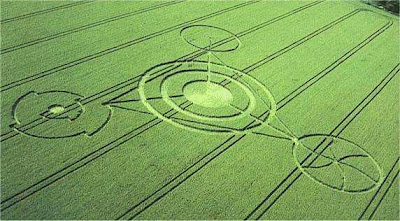 Here is an example of a crop circle (above) from Barbary Castle 1991 – it shows geometry and encoded information about the universe.
http://i41.tinypic.com/t0qc01.jpg 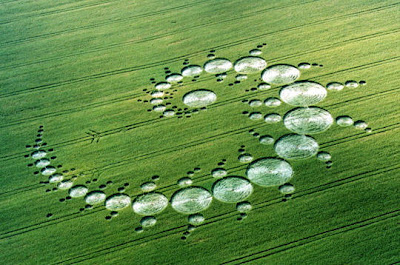 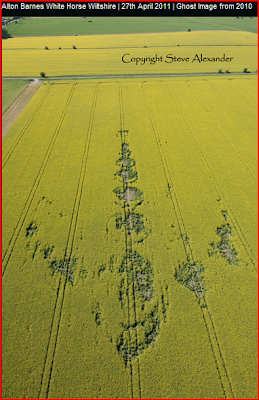 There have also been “ghost” crop circles (as above) – apparent failures, but which are impressive because they could only have been made from above. TAP The failures are the key to whether they are fakes or real, I suppose, in that a failure is impossible to fake.

THE NEXT TWO POSTS FOLLOW ON FROM HERE.
First one link

5 Responses to “Crop Circles Reported In 815 AD In France.”