Most people would admire Gregory for his determination not to be suppressed and silenced by whichever authorities are working him over so nastily, with forced medication, sound waves that are disturbing his dogs and cutting off of his phone and computer. But what about the poor Iraqis? They’ve been victims of American and British brutality for twenty years. Their country and way of life have been destroyed and handed over to corporations like Halliburton, Monsanto, Cargill and other corrupt giant enterprises of evil. 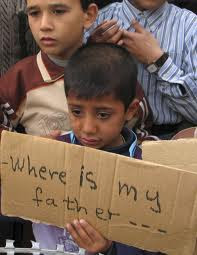 The hardest part for Gregory, who is seeking to make a psychological recovery from the awful things he experienced in Iraq, must surely be to confront that fact the he was part of invading army that carried out acts of great barbarity. He should never have been there in the first place, and the results of his being there are catastrophic for the world.

There were six doubles of Saddam to choose from. This is Saddam as he was seen in earlier days, when he was known to be a puppet of the US.

Gregory describes the suffering of himself and his comrades in Iraq. Anyone would feel deeply sorry for the soldiers and especially the families who lost sons and fathers. But unless an equivalent sympathy is held for the Iraqis, who were also victims, and on a far greater scale than the occupying armies, the search for sympathy to his cause is indeed lessened. All are victims of the One World Government that orchestrated the war into being, funded and supported the ‘enemy’, and is still carrying out acts of terror in that country to ensure total disintegration of the society that once existed there, with the nation gradually being broken up.

I guess for the soldiers like Gregory, the intuitive knowledge that their own suffering in Iraq, and subsequent to it, was to take part in an enterprise of evil, is simply too much to bear. Maybe that is one reason why Gregory is seeking to ascribe guilt to others, like Alex Jones, in a need to find a psychological scapegoat. Gregory is wondering if Alex Jones is a CIA frontman, because he doesn’t delve into certain areas of inquiry, and because he hasn’t called him to apologise over what’s being done to him. There are a lot of questions to answer, and much unravelling of issues to do.

Alex Jones must surely basically be in agreement with Gregory, as the comment suggests, that Free Speech in America is now a key battleground for the future of humankind. My friends from the USA tell me they now hate travelling, due to the intrusions of the TSA. Freedom is rapidly eroding there. Gregory Pitchfords and Alex Jones’ should join forces and fight on the same side. Can we see a handshake over all this, and a reconciliation. Maybe Gregory, you need to make some concessions too, as well as seeing all the problems as residing in the camp of others.

Be friends. You’re on the same team.

Alex Jones cannot defeat the globalists by himself, which is why he needs Gregory Pitchford and the rest of us. You just have to know which side you are on and charge for victory.

9:54 PM
Gregory Pitchford said…
Personally for me, the hardest part in Abu Ghraib was having to build a relationship with the Chief and his assistants to keep the peace in the camp and at the same time hear day after day after day after day after day…”Is the HAPPY BUS here Sergeant Pitchford” When will the Happy Bus come?” The Happy bus was the bus that took them home. The Marines would have a saying, “Round them up and let M.I. sort them out” I know there were many innocent civilians who were there only because they were at the wrong place at the wrong time. I felt their pain and cried many nights with feelings of guilt. The judical process was so backed up that many of them had been there for years. Familiy members, brothers, fathers, cousins all there separate even from each other in different camps that were only 20 feet from each other. I did my absolute best to make the situation as fair as possible while others just mocked and laughed at them using the abuse of Korans to stir shit up.

When a full bird Colonel walks into Guard Mount prior to your shift and tells the entire oncoming crew that everyone one of them was a mistake and that they never should have made it into the prison alive it becomes quite disturbing. I did my best in a fucked up situation of injustice, most of us did but if you want me to say that our cause was completely unjust, I won’t. I am Christian first and a Soldier second. A soldier of a Country, that while has done some horrible things, represents something I very much believe in, The Truth for Justice and the American Way. A way of life that is a shining beacon on a hill for all to see.

While tyrants like Sadamm had their sons show up at the prison for a drunken target practice of Shia prisoners and surpress the rights of their population like Freedom of Speech, we here in America walking around like our rights are a given and can never be surpressed. I am greatly afraid that the training our soldiers have received in the ever increasing detainee operations will one day be used on another entirely different population. A population that should be listening to Alex Jones and wake up before its too late.

Tapestry said…
Demonising your enemies is how they get you to fight. But was any of it true? Saddam wasn’t executed or put on trial. His own wife shouted out,’That’s not my husband.’ They always use doubles. The ‘hanging’ wasn’t real as many commenters have demonstrated.

Coast to coast a.m. answered and I gave him quick summary of the story. We’re on. Take that title off and change it now. While I trust your judgement, trust mine now. We won’t need to engage in trickery once I get on that show. Get that stupid stuff about saddam off the final blog about me. I have been instructed to call him back at midnight pacific. Henry get ready to have your blog site blown up with coast to coast am listeners

10 Responses to “Can Soldiers Who Went To Iraq Ever Admit That The Campaign Was Wrong?”