This has finally made the MSM

//Glen Johnson was five players down the line when Luis Suarez seemingly refused to shake hands with Patrice Evra at Old Trafford last month. He didn’t see it.
The Liverpool defender has watched it plenty of times on television since, though, and he is convinced of what happened.

‘Evra was clever at Old Trafford,’ said Johnson, extending his hand directly towards me. ‘Because – I’m not being funny – but if I wanted to shake your hand I would stick it right out in front of me like that. But if my hand is down here, almost by my side, then it’s because I really don’t want to shake your hand.//

Luis Suarez goes to shake hands with Patrice Evra. The media says Luis then pulled away his hand. The above pictures (not shown by the media) show clearly that the opposite took place, and it was Evra that caused the incident.

Sent in by anonymous

Tap, football is a means by which the globalists are indoctrinating the general public to completely submit to arbitrary rulings. Football’s not just entertainment and a distraction. It’s an indoctrination tool, showing that endemic corruption wins, that you have do what the authorities say, and being innocent is no defence. 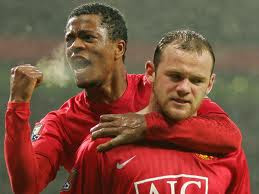 Luis Suarez (Liverpool forward) does not claim to be racist but was banned for 8 matches for racially abusing Patrice Evra (Manchester United captain). Suarez admitted he used the word “negro” at Evra, however it is said in South America this is a term for a friend, it is not abuse. The media hyped up the situation, demonizing someone, who isn’t racist, of effectively being worse than Hitler.

TAP – Negro is the Latin word for black. It became the word for slave in America pre-abolition. There is much left-over guilt about that era. Despite that, the modern day US prison system enslaves more negroes in profitless work than the plantations in their heyday. 6 million Americans are forced to work for prison wages (i.e. nothing),of whom 80% are negroes. Nothing is ever mentioned of today’s mass corporate racial exploitation.

In the Philippines where I’ve lived five years, the word for a black person is negga, just normal, no PC, just as it is in South America. 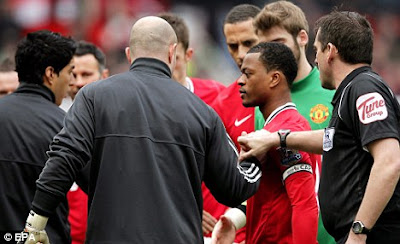 post
This handshake incident occurred on Suarez’ first game back after his ban at the start of a Manchester United – Liverpool game.

The media narrative is demonizing someone who is not a racist, as being a racist. Suarez is repeatedly accused of refusing to shake hands when the video evidence shows the opposite – it was Evra who held his hand back.

This is the key image below. Notice how the media organizations don’t use the camera angle in the link, used at the top of this post.
http://i43.tinypic.com/2chmbe9.jpg

Suarez should have made a greater effort to force the handshake, but he felt sure it was Evra who pulled away, not him.

The take home fact why this is important is the whole incident looks engineered.

2. One of the ground level TV cameras is in a perfect position to capture Evra’s reaction – were they expecting something?

3. Evra did not even try to shake Suarez’s hand

4. The media have immediately settled on a narrative that is not consistent with the facts

5. On their Match of the Day programme the BBC showed a Sky News interview of Kenny Dalgleish, not the BBC man’s one. Why the cooperation between the two organizations on this issue?

6. Why has Prime Minister David Cameron got involved over a handshake? 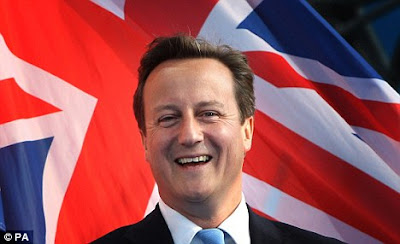 “David Cameron is expected to step into the row over racism in football by staging a Downing Street summit on the issue.”

This does seem like a distraction – however, we shouldn’t ignore these distractions completely because they could offer the globalists a free opportunity to indoctrinate without resistance.

TAP – They work to divide and rule. They need incidents like this to justify intervention in our otherwise peaceful society. Problem. Solution. It’s the politician’s number one trick. Football is the loser..

Cameron’s an idiot, but is a well known performer of televised handshake theatre.
He’s been playing his own handshake diplomacy games with Sarkozy, no doubt equally scripted beforehand, to convince a gullible audience that his EU negotiations are not simply scripted to order, as they clearly are.

UPDATE – Next up, Cameron’s best buddies at News International weigh in, The Sun demanding the renewed suspension of Suarez, when he was quite clearly the one snubbed. Do these idiots think the public are so dumb they won’t notice? I think they do.

The Sun writes – FLASH POINT … Luis Suarez refused to shake the hand of Manchester United’s Patrice Evra, and they carefully didn’t show the camera angle at the top of this post.

Now come on, ‘News’ International. Do try and report news just for once.

PFA has got involved. They want to ban Suarez again for not shaking hands when it was Evra who snubbed him?

TAP – These people are all totally mad. Or more likely nasty and devious. This is a vicious political stitch-up. Luis Suarez is innocent. David Cameron should be ashamed of himself. 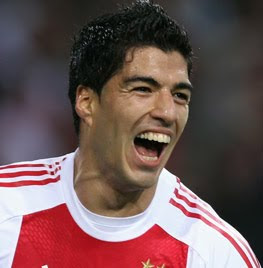 Watch the film again. It is quite clear that Patrice Evra pulled away his hand. Luis Suarez just ploughed on, not forcing the handshake. How could he? He just did the sensible thing and kept on walking. Evra stirred it all up on purpose.

Patrice Evra should be sacked on the spot. But you watch. P.C.Cameron will be inviting him to Downing Street, and giving him a knighthood before the 2015 election, at the very least. Prime Ministers should not be getting involved in nonsense like this, let alone setting it all up.

12 Responses to “Suarez Is Innocent. Evra Is Guilty.”