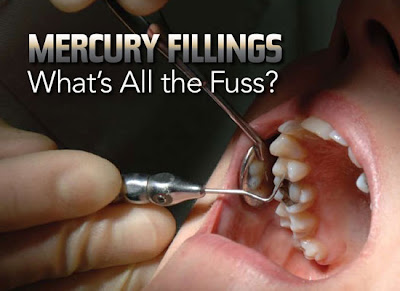 * Toxic mercury vapors from “silver fillings” are released into your oral cavity every time you chew or drink hot liquids.

* A single dental amalgam filling releases up to 15 micrograms of mercury per day—over six times the amount you’d get from eating mercury-contaminated seafood—and is the primary source of mercury exposure in consumers.

TAP Part of the cure for my long illness where my nervous system was overloaded with toxins of various kinds including sprays from farming as a boy on my fathers farm, included the removal of all the mercury fillings in my mouth. Dentists couldn’t wait to ram mercury into the mouths of children as that is what they were paid for, at that time (1950s and 1960s). I had eight, which were contributing to my listless state. They were removed at great expense, and my measured load of mercury fell from eight times reference level to below reference level after a course of chelation, and intense sweating.

The dentists were no better off. In fact the next hospital bed to mine where I languished for months was a dentist. He had thirty times the reference level and couldn’t walk when he came in. After his treatment he was playing four hour tennis matches. Make no mistake, he would have died had he not been treated as sadly some patients do, who are unable to sweat, especially women. Men can usually sweat, and that is how we get the crap out of our bodies. Women are less fortunate and often cannot improve so quickly.

TPTB knew perfectly well they were inserting a powerful poison into the mouths of children. Just as they knew farm spray like PCB were lethal not only to insects, but also to humans, albeit a little more slower to have that effect. I am eternally grateful to the doctors who cured me, and am now on the lookout for the next batch of poisons the OWG are keen to deliver into our environment, for which the list lengthens as every year goes by.

If you have lots of mercury in your mouth, get it taken out. That’s my advice. You will live longer and healthier, if you do, and continue vigilance against all poisons deliberately inserted into our environment.