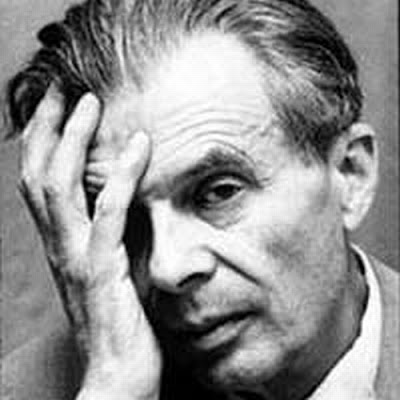 Here’s a good website – a friend of mine with journalist friends recommended it. It’s called ‘information clearing house’.

TAP Thanks, Scotty. The quotations in the intro are brilliant, summing up how it is the apathy of people, as much as their ignorance, which is the problem. Let Aldous Huxley (pictured above) explain, and then Robert Kennedy –

“Only a large-scale popular movement toward decentralization and self-help can arrest the present tendency toward statism… A really efficient totalitarian state would be one in which the all-powerful executive of political bosses and their army of managers control a population of slaves who do not have to be coerced, because they love their servitude. To make them love it is the task assigned, in present-day totalitarian states, to ministries of propaganda, newspaper editors and schoolteachers.”

“Few are willing to brave the disapproval of their fellows, the censure of the colleagues, the wrath of their society. Moral courage is a rarer commodity than bravery in battle or great intelligence. Yet it is the one essential, vital quality for those who seek to change a world that yields most painfully to change. Each time a person stands up for an idea, or acts to improve the lot of others, or strikes out against injustice, (s)he sends forth a tiny ripple of hope, and crossing each other from a million different centers of energy and daring, those ripples build a current that can sweep down the mightiest walls of oppression and resistance.”

“I confidently trust that the American people will prove themselves too wise not to detect the false pride or the dangerous ambitions or the selfish schemes which so often hide themselves under that deceptive cry of mock patriotism: ‘Our country, right or wrong!’ They will not fail to recognize that our dignity, our free institutions and the peace and welfare of this and coming generations of Americans will be secure only as we cling to the watchword of true patriotism: ‘Our country-when right to be kept right; when wrong to be put right.'”

The website headed ‘Stop The Madness’ is here. As the quotations suggest, people just don’t have time, and don’t want to know what’s really going on. The articles are excellent.

January 25, 2012 “Buffalo News” – -The recent Pew Research report on tensions between the rich and poor gives a road map to the ofttimes unfocused Occupy movement. Since 2009, the study found, there is “a growing awareness of class conflict” among Americans.

Whatever its findings, that the mainstream Pew Research Center would frame the report in the usually verboten language of “class conflict” is itself remarkable. Whenever verbiage such as “class” or “class struggle,” let alone “class conflict” is used by academics or politicians to describe the incongruity between democracy and capitalism, it is rejected as Marxist ideological rant.

Even the avoidance of the use of “working class” for the more centrist “middle class” by President Obama led to the farcical cry of Republican presidential candidate Rick Santorum that Obama was encouraging class warfare.

This is hardly surprising, for when Obama attempted to raise taxes on the wealthy for the benefit of the larger populace, he was charged with encouraging class warfare rather than attempting a more equitable distribution of wealth. Although the concept of a fair distribution of assets is democratic, not Marxist, in thrust, and the 1 percent have been waging a rigged undeclared war against the 99 percent for decades, now that the 99 percent have begun pushing back, there is an inevitable cry of foul from the reactionary rich.

Award-winning author and scholar Michael Parenti, especially in his classic “Democracy for the Few,” argues “whatever modicum of democracy the people attain in any society is usually the outcome of a general struggle for a more equitable politico-economic order.” With the Occupy movement, that struggle has become visible.

Lest I be charged with advocating some form of Marxist rubric, I believe that while struggle, such as the civil rights movement, is at the heart of the most dramatic social change in the United States, only someone with historical and sociological amnesia would think that revolution will ever hold sway in the United States. The widespread belief of working-class people that they can become part of the upper class and the coming of the computer age renders stillborn any Marxist notion of a violent overthrow.

The savage corporate plunder that led to our current recession, however, seems to have exploded for all time the belief in the existence of a harmonious, prosperous society. Who would argue against the theory that the protest of the so-called 99 percent against the 1 percent is a rebellion of the poor and middle class against the rich based on a recognition that society is stratified?

Ross T. Runfola is an attorney, writer and poet who is a professor of sociology at Medaille College.