Despite the fact that the United States administers the highest number of vaccine doses to children in the entire developed world, 26 before infants reach the age of one, its infant mortality rate is higher than 33 other nations, all of which administer less vaccines. The study clearly illustrates the fact that developed countries which administer less vaccines have lower infant mortality rates, suggesting a direct statistical link between vaccination side-effects and infant deaths.

Despite the fact that it administers the most vaccines, the United States has the highest infant mortality rate of all developed countries, with an average of 6.22 deaths per 1000 live births. The US has a far higher infant mortality rate than the likes of Cuba or Slovenia despite spending vastly more on health care. 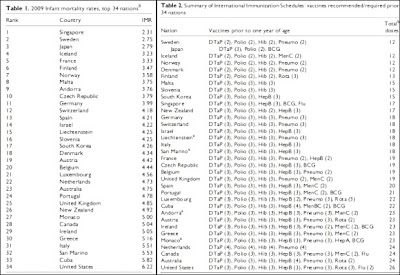 The correlation between higher numbers of vaccines and infant mortality figures takes on an altogether more sinister context when we consider the fact that during the February 2010 TED conference, Bill Gates, an enthusiastic proponent of vaccination programs, openly stated that vaccines should be used to lower global population in the pursuit of reducing CO2 emissions.
Gates is an avowed eugenicist who is committed to drastically reducing the world’s population in the name of combating global warming. This is alarming given the fact that the Bill and Melinda Gates Foundation funds the production and distribution of vaccines to the third world.

Decrying the fact that the global population was heading towards 9 billion, Gates said, “If we do a really great job on new vaccines, health care, reproductive health services, we could lower that by perhaps 10 or 15 per cent.”

TAP – Bill Gates will not reach his target of a 10-15% reduction in population size if vaccination is only killing 6 babies per 1000. There must be other effects involved – such as sterilisation, seeding of lethal carcinogenic viruses and so on.

Anonymous said…
Whilst I’m inclined to believe there are people who are actively trying to depopulate the planet, I’ve listened to Bill Gates’ comments in context and suspect his thinking works as follows:

1. He believes vaccines work (or at least convey more benefit than harm).

2. He is aware that the best (humane non-coercive) way to bring down birth rates is to improve peoples general health – in particular infant mortality… (As general health and standards of living improve in developing countries, birth rates fall as a consequence – this is a universal phenomenon).

3. The result of decreasing birth rates is that population growth will slow.

It’s been a while since I watched Bill talk about this (I believe there’s a TED video available on YouTube), but I more inclined to give him the benefit of the doubt that he may be genuinely well-meaning (though personally I believe vaccines convey great harm and very little benefit and that Bill is mistaken).

As for the 10-15%, might he have been saying (based on his assumptions about vaccine effectiveness) that if we act promptly then at whatever date in the future we are currently predicting the world population to reach 9 billion, it may actually be 10 to 15% lower. (Even if his assumptions of vaccine safety and effectiveness are correct this seems an overblown suggestion, but it may just be marketing hyperbole rather than “evil eugenicism”)…

Is there some other evidence that Bill is a eugenicist? Or could he just believe (in my view mistakenly) that vaccines are safe and effective?

Tapestry said…
That seems like an intelligent and reasonable response. But you need to take the vaccination story and put it into context.

It is proven that sterilisation programmes were secretly used in vaccines against tetanus. They were injected along with the female pregnancy hormone. This created an immune response so that thousands of women miscarried, as their own immune system rejected the hormones needed to carry a pregnancy. (Read Seeds Of Destruction by Engdahl).

Watch the video posted today about chemtrails, and the deliberate poisoning of human populations and environments.

Follow the story on spermicidal corn also in Seeds Of Destruction by William Engdahl.

There is undoubtedly a worldwide campaign to reduce human population. If you research it, it is not hard to find. Go to www.radioliberty.com and listen to Dr Monteith for an hour – None Dare Call It genocide.

3 Responses to “USA Infant Mortality Higher Than Cuba. Why?”