Here we go again. Just swap over one letter, an N for a Q, and what do you get? Iran. Neocons. Lies. False flag terror. Military build-up. Assassination. In a word, war. 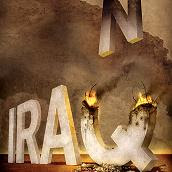 Both wars were planned over twenty years ago. We are all waking up a bit late. But better late than never.

Last time we had ‘the dodgy dossier’ and WMD. This time we have WMD all over again, and yes, another dodgy dossier. The evidence being used to justify the war is again manufactured by the US government. This time a few more people are watching out for sleight of hand than were doing with Iraq, when the majority of people, despite all the evidence, still trusted their governments. I did. I remember thinking at the time (2003) that the evidence seemed a bit strange, but what choice did I have but to trust Tony Blair, the man elected as our Prime Minister? I now see things differently of course, nine years later – a bit late! But better late than never. Cameron is an out and out liar just like Blair.

The Washington Blog details the deceptions being perpetrated to justify a war with Iran, which we now know, thanks to the internet, are simply the norm.

The IAEA report being trumpted as a casus belli contains no new information, but is based on a re-hashing of old, debunked claims stemming from “laptop documents”.

State Department cables released by Wikileaks reveal that the new IAEA head was heavily backed by the U.S., based upon his promises of fealty to the U.S. Indeed, as we’ve seen in the nuclear energy arena, the IAEA is not a neutral, fact-based organization, but a wholly-captured, political agency.

But where did the documents come from originally?

The George W. Bush administration has long pushed the “laptop documents” – 1,000 pages of technical documents supposedly from a stolen Iranian laptop – as hard evidence of Iranian intentions to build a nuclear weapon. Now charges based on those documents pose the only remaining obstacles to the International Atomic Energy Agency (IAEA) declaring that Iran has resolved all unanswered questions about its nuclear programme.

But those documents have long been regarded with great suspicion by U.S. and foreign analysts. German officials have identified the source of the laptop documents in November 2004 as the Mujahideen e Khalq (MEK), which along with its political arm, the National Council of Resistance in Iran (NCRI), is listed by the U.S. State Department as a terrorist organisation.

So the terrorist group which “found” the documents is funded by neoconservatives who want to overthrow Iran. What a coincidence!

4 Responses to “US Government Funded The Iranian Terrorists Which ‘Found’ The Evidence Justifying War….”