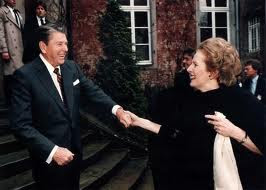 They both believed in free enterprise and opposing the Soviet Union. Yet he must have known the Soviet Union was entirely a creation of Wall St used to whip countries like Britain into line.

Their relationship was described as ‘special’. He helped her out over The Falklands with military supply, when she made it clear she was going in, though the Americans were clearly involved in the deception practised by Carrington, who hid the clear evidence of the coming invasion, which led to the war.

She agreed with Reagan as part of the Trident deal, that whenever the President of the US commands, Britain would go to war. Hence our involvement in every war since 911. (Gordon Logan)

We were suckered into handing over our national independence over a submarine which we never needed and could never use. Thatcher obviously completely trusted Reagan, and a number of Conservative politicians like Liam Fox have carried on believing Americans are motherhood and apple pie, with a WW2 propaganda naivety, ever since.

The evidence that Reagan was providing cover for the Neocons that took over The White House openly under Bush was already more than apparent. But Thatcher, believing in the power of good over evil, misread the signs. She was an innocent abroad, having no idea of the real history of the world. Come to that, how many current members of the government have any real idea how the world works and has done a very long time, other than David Cameron, as he is clearly party to the ongoing deception? Reagan too was busy expanding the Bankers’ Empire superimposed on The American Republic, and fooling Thatcher into thinking he was a believer in good the same as her.

The Iran Contra scandal. Hersh said the Reagan administration came to office with a clear goal of finding a way to finance covert actions, such as the funding of the Nicaraguan Contras, without appropriations so that Congress wouldn’t know about them.

Mondale noted that Reagan had signed a law barring further aid to the Contras, then participated in a scheme to keep the aid flowing. Hersh said that two key veterans of Iran-Contra, Dick Cheney and national security official Elliot Abrams, were reunited in the George W. Bush White House and decided that the key lesson from Iran-Contra was that too many people in the administration knew about it.

TAP – Reagan was well into the dirty business. The question though, remains why did the Bushes try to assassinate him? Perhaps Reagan sometimes doubted the wisdom of destroying the American Republic. He forgot he was a servant of the elites and began to believe in democracy. Maybe he and Thatcher did have a lot more in common. Reagan wanted things to be different, but he made an even better job of deceiving Thatcher that way. Maybe he actually meant what he was saying. That’s when the Bushes tried to remove him, as they wanted to press on with America’s destruction. Alternatively he just knew too much.

There is now, so much stuff around that it is difficult to know what to send you. I tend to go off on Tangents when I am searching, as I often find stuff that looks interesting, but leads away from the original source material. Here is something I picked up from EXOPOLITICS dated
Oct 6, 2007 but you might find it interesting.

If Bush orders military strikes against Iran, both he & Cheney will be immediately impeached..
This is the newest being circulated by a number of leading Democratic lawmakers to their key constituents, who remain fit-to-be-tied over the Dems’ capitulation to Speaker of the House Nancy Pelosi , who has declared, for months, that impeachment is “off the table.”

Congressional Democrats, having failed to support Rep. Dennis Kucinich’s (D-Ohio) calling for the impeachment of Cheney, have now gone one step further towards capitulating to another devastating Cheney-Bush war, through legislative acts of treachery that have given the White House a green light to bomb Iran back to the Stone Age –

On Sept. 26, by a vote of 76-22, the U.S. Senate approved an amendment to the defense authorization bill, calling on President Bush to list Iran’s Revolutionary Guard Corps (IRGC) as a “foreign terrorist organization,” subject to a wide range of economic sanctions. Military experts consulted by EIR confirmed that, while the designation principally authorizes economic measures, the ambiguities of the Bush Administration’s so-called “Global War on Terror” makes the Senate vote a de facto endorsement of military action

The result of the amendment, which was introduced by two of Cheney’s leading Senate allies – Joe Lieberman (I-Ct.) and Jon Kyl (R-Ariz.) – President Bush can order a bombing campaign against Iran at any time, without having to go to Congress for further authorization, according to a number of constitutional scholars and military analysts.

Bush has already done the Ground Work for these MANIACS to bomb regardless, I hadn’t realised this had been done, had you?
This is relevant to present sabre-rattling Obama is carrying out at present, so here is the Link:-

One Response to “Thatcher Was Taken In By Reagan”