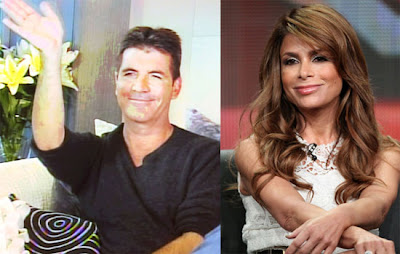 Not quite a textbook Sieg Heil. The media allege that Paula Abdul once kissed Simon Cowell and they were a hot item. Yeah right!

Nearly out of this hellhole of a hospital….just picked up a comment from HETT, who says X Factor is an Illuminati propaganda mind-dumbing authoritarian exercise. Looking at Simon Cowell crushing the dreams of the teens that stray in front of his panel, relishing every ounce of his totalitarian power to decide each individual’s chances for a career, I can believe it is an exercise in cultural programming. It prepares the masses (us) for this kind of approach being taken more generally. After all, there is no need to send people crashing to despair just because they can’t sing as well as they hoped!

There is strong racist element visible with blacks sent crashing out even when they are by far the best. (Cheryl Cole didn’t exactly disguise her racism too well. Simon sat on his hands).

Not to mention the ludicrous efforts to hide that fact that Simon Cowell’s gay with a string of (paid) lovelies trotted out for media consumption. There is equally no mention anywhere that he is a Jew. Why not? What have Jews got to hide? Or gays? Cowell’s as false as a shop window manikin. Maybe trained at the Tavistock. Who knows? Hitler and Stalin are from the same genre don’t you think. They were star Tavistockers, attending in 1912 (Hitler) and 1907 (Stalin) – both illegitimate Rothschilds.

Here he is at it, favouring the stars that are sold out to the devil, like himself –

3 Responses to “Simon Cowell Owes Much To Hitler”