TAP – I was describing recently on the blog the energy I felt twenty and more years ago at a certain place in Manila City centre, Philippines, which has been an important part of my recovery from illness. The illness was diagnosed years later as nerve damage caused by PCB sprays on my father’s farm. At the time it was hard to understand what the trouble was, but somehow the energy I could feel in this place, rectified a malfunctioning of some kind, calmed my mind, filled me with amazing and uncharacteristic optimism and contributed to my recovery.

Julia’s research is constant these days, with no grass visibly growing under her feet. Today she’s been looking to see if there are any equivalent places worth checking out when I’m back in the UK. She’s also interested in how the ancients derived energy from the environment.

I stumbled on this idea last night when I was trying to think of a place near me that might have the same level of power as your place in Manila. 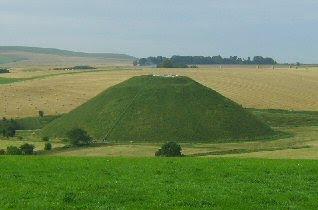 Conical in shape, and rising to a height of 130 ft, with a circular base more than 200 yards in diameter and a flattened top. Its total volume has been estimated at 400,000 cubic feet. Excavations at the top and sides have revealed no skeletal or funerary remains. There are indications that a large pole may have once topped the hill.

Julia contd.
I have just done a very quick search, and found that Silbury Hill has remarkable similarities to the Egyptian pyramids. It is the same size as a small Giza pyramid. There are water aquifers at the base. It is on a major leyline. There is evidence of some sort of pole that used to stick out the top. It was built around 2500 BC. The chalk would have been reflective. They thought it was a tomb, but can’t find any evidence. Sounds familiar.

Obviously it is a power station and navigation guide.

(TAP – we recently posted two excellent videos demonstrating that these were functions of the pyramids at Giza.)

Glastonbury Tor seems to be the same!

“Although there are several other significant prehistoric structures in the area (including the largest stone circle in the world at Avebury), they sit in effective isolation from each other. It is only from the top of the adjacent Wodin hill that they can be viewed together, and a glimpse of the larger ceremonial landscape can be imagined”

(TAP. Wodin Hill. That’s not the same as Wotan, is it, from which Wednesday derives. He only had one eye!)

It is also significant that this is the centre of the whole world for Crop Circles.

This BBC article from 2001 is hilarious. They have no idea. Even though the purpose of Silbury Hill is a complete mystery, they won’t consider any suggestions outside their narrow view. Unfortunately no one is allowed to trespass on it. It belongs to someone. Funny how all these places are fenced off.

I have been trying to find info on peak energy spots, but it is quite difficult. This is the first site I have come across that gives some clarity.

I just love this! Only 11 major vortices on the planet. And one is in the Philippines, (doesn’t say where, but must be your favourite spot Tap). And one is Avebury, where lies Silbury Hill! The David Icke Third Eye interview, on the blog this week, took place in Sedona.