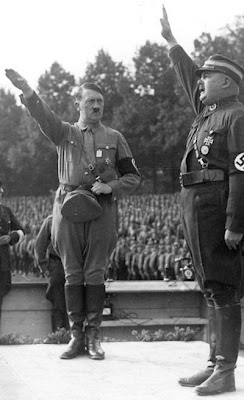 Hitler and Roehm at Nuremberg. Things are more subtle these days. The effect is the same – totalitarian state power, as large corporations and government merge into a single bloc. Then hire thugs to enforce their programmes. It doesn’t take many to overpower all democratic opposition. The Bushes funded the NAZIs from the beginning. Now they’re following the same pattern of power seizure in the USA.

Xe Services (Blackwater) is now called Academi. Does the latest rebranding suggest they are moving into private intelligence work against the American people?

Academi is the private army of the globalist bankers.

One of their aims is to raise a brigade size force of 5,000 for (so-called) “humanitarian” wars and “low-intensity conflicts”. I suspect this is intended to be employed against the American people, whilst pretending to be neutral.

The name Academi is surely designed to sound harmless in media reports of its activities, as though it is a branch of a university and a friend of the middle class.

I found this information after reading that Monsanto supposedly owns this private mercenary army (now called Academi). The article that says this cites The Nation. However, I did not find the same statement in that article when I looked just now. It merely says there is ‘close cooperation’ between Monsanto and Academi (Xe Services).

BTW this is a year old article so you may already have it, and some details might have changed.

“One of the most incendiary details in the documents is that Blackwater, through Total Intelligence, sought to become the “intel arm” of Monsanto, offering to provide operatives to infiltrate activist groups organizing against the multinational biotech firm.”

All powerful security agencies are a disturbing trend. Who are they really accountable to?

This is an army in the service of evil. A powerful force working to bring down America and enforce global tyranny.