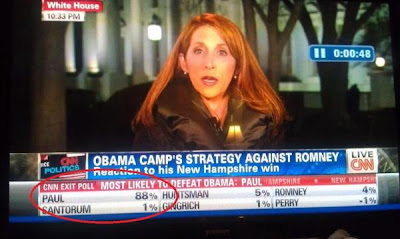 This flashed on CNN. It only appeared once, was not commented on and disappeared. He’s not ‘in the family’ you see. 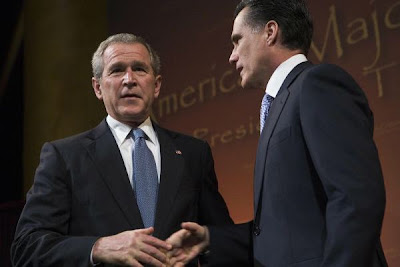 Romney & Bush are cousins. They have a family look. Politics and power are a family business. The Bushes are relatives of the British Royal Family, who are related to David Cameron. Ron Paul doesn’t come from inside the circle, so his overwhelming support from the electorate counts for little.

Believe it or not, Mitt Romney and George W. Bush are cousins — 10th cousins, twice removed, that is. Historians at Ancestry.com, the world’s largest online family-history resource, have discovered that Romney is actually related to six past presidents — more than any other 2012 GOP contestant. Franklin D. Roosevelt is his eighth cousin, twice removed, and both Calvin Coolidge and Herbert Hoover are his 10th cousins. Then there is his sixth cousin (four times removed) Franklin Pierce, and both 10th cousins Bush I and II. Three out of these six were even (gasp!) Democrats.

It turns out that presidential candidates often have Commander in Chief relatives, and this election cycle is no different, finds Ancestry.com after six months of research. Jon Huntsman is also related to FDR, Coolidge and the Bushes. And yes, his bloodline mirrors Romney’s because they too are cousins: Romney’s great-great-grandfather Parley Pratt, an early Mormon missionary, is Huntsman’s great-great-great-grandfather. The Romney-Huntsman–George W. Bush connection comes through Anne Marbury Hutchinson, who was a religious-freedom advocate in early 1600s. Rather fitting, since all three of them are still quite open about their faiths, be they Mormon or Evangelical.

Rick Perry has just one presidential relative: Harry Truman is his fifth cousin four times removed. But Perry shares Lone State pride and blood with Sam Houston, the famed President of the Republic of Texas from the 1830s. While Houston resigned as the governor rather than swear allegiance to the Confederacy, notes the report, Perry has many relatives who fought for the South during the Civil War.

These are the relationships we know about. Politics and power always have other lines of connection through illegitimacy. I doubt TIME or ancestry.com would contemplate telling us anything about that though!

This clip theorises how the Illuminati will eliminate Ron Paul. Ben Fulford says The White Dragon Society has threatened retaliation if they rub him out. From comments..