The Intel Hub
January 23, 2012
NASHVILLE — Senator Rand Paul was detained by the TSA today as he was attempting to fly to Washington for an important Senate session.

After an apparent anomaly in the scanner reading, Paul was then asked to submit to a full body pat down which he calmly declined.

Ron Paul’s official Facebook page released this statement shortly after his son was detained.
“My son Rand is currently being detained by the TSA at the Nashville Airport. I’ll share more details as the situation unfolds.”

A recent Infowars article covered this disgusting display of the police state in America.
After refusing the pat-down on the grounds that it was an infringement on his rights and “private property”, Paul said he was then “detained” in a small cubicle and consequently missed a flight to Washington for a Senate session. Paul was also due to speak at the March for Life later today in DC.

Paul also said that the incident highlights how the TSA should not be “spending so much time with people who wouldn’t attack us.”

The Senator expressed confusion over why his knee would set off an alarm on the body scanner, adding that he rolled up his trouser leg, showing his knee to the security agents. Paul also confirmed that he does not have any metal plates or screws in his knee joint.

The TSA, with the help of their puppets in the corporate controlled media, have attempted to change the narrative of the story by acting like Paul was not actually detained.

This is happening because the TSA DIRECTLY violated the United States Constitution. As pointed out by Steve Watson, the TSA broke the law when they detained a Senator who was on his way to a Senate session.

Article I, Section 6 clearly states:
“The Senators and Representatives…shall in all Cases, except Treason, Felony and Breach of the Peace, be privileged from Arrest during their Attendance at the Session of their respective Houses, and in going to and returning from the same….”
The TSA agents involved in Rand’s detention as well as the head of the TSA himself should be immediately charged and removed from their jobs. Again, this was a direct violation of the Constitution of this once great country.
Just because the very people who broke the law are now stating that Paul was never detained does NOT make it fact. Rand Paul was detained in route to a Senate session. This fact cannot be changed.

Both Ron Paul and Rand Paul have been the most outspoken critics of the TSA Gestapo in Congress and it seems that these thugs may now be actually be targeting political opponents of their repressive agency. 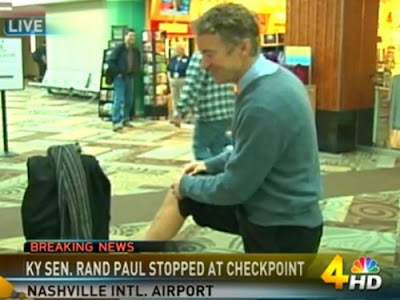 Sent in by ZHENG YONG.

Today Rand Paul, speaking to the Daily Caller, described his detention by TSA agents yesterday in what many believe amounted to a clear cut violation of the Constitution.

Paul described his detention as a big ordeal that highlights the growing problems with the Transportation Security Agency and their police state actions.

For their part, the White House came out in defense of the TSA thugs who detained a sitting Senator as a possible terrorist, with White House spokesman James Carney attempting to change the narrative and reality of the story by claiming Rand wasn’t actually detained.
“Let’s be clear,” Carney said. “The passenger was not detained. He was escorted out of the area by local law-enforcement.”

This statement is such a blatant lie that it’s actually hard to believe it was said.
According to Paul and all the evidence gathered so far, this was absolutely a detention that caused him to miss a major speech.

But Sen. Paul told TheDC that he certainly felt like he was detained. “If you’re told you can’t leave, does that count as detention?” Paul asked.

We now live in a country where TSA agents can detain one of their political opponents and in turn be defended and even praised by an official spokesman of the President. (Who also happens to be a political opponent of the person detained).

JULIA –
I am familiar with this technique. It is much more powerful to threaten your loved ones than to threaten you. Think about it. You might think it is worth risking your own life for your beliefs.. But what if you knew that the gun was pointed at someone else, and your action would flip the trigger? This technique was used on Brian Keenan and John McCarthy when held hostage on Lebanon.