We have taken two days to get over the shock of finding out our newborn son was injected with Engerix-B at six hours of age, dealt with in previous post. I go to pay the bill this morning and find that another unauthorised medical intervention had taken place at the same time. The drug KONAKION was injected in our six hour old son by the paediatrician at the Asian Hospital And Medical Center, Manila, Philippines. 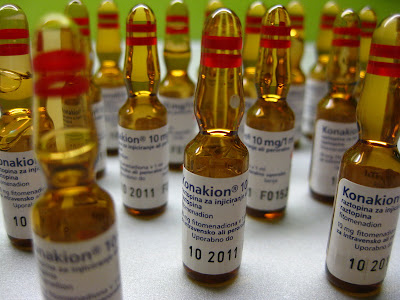 Allergy timebombs. Konakion planted into hour old babies by the Asian Hospital And Medical Center, Manila without even telling parents, let alone getting their permission first, which the hospital badges as their unfailing policy. ****ing liars, basically.

Her excuse for injecting Engerix-B had been that the intervention was mandated for all Philippine babies despite it being associated with a string of known side effects. At six hours old, why do that?

Her injection of KONAKION can be defended with no such excuse. We were not consulted or even told of its injection into our son. I only found out when I noticed two syringes had been billed on his account, even though we were only told of the ENGERIX-B. With further enquiry I got the low down on KONAKION.

It is only needed if the baby’s mother was malnourished in some way, which Shen most certainly is not. The side effects as usual are criminal as in most injections and vaccinations. Why the hell are they given to hour old new born babies unless the intention to to rub out a few, and grind down the natural health level of the others with a raft of problems feeding profits to themselves and pharmaceutical companies.

The manufacturer of KONAKION admits the following side effects. Of course you must wonder if they would admit if there were any worse.

Seek emergency medical attention or contact your doctor immediately if you experience any serious side effects from phytonadione such as:
an allergic reaction (difficulty breathing; closing of the throat; swelling of the lips, tongue, or face; or hives);

fast or irregular heartbeats; or

Other less serious side effects may be more likely to occur.

flushing of the face;

an unusual taste in the mouth; or

pain or irritation at the injection site (injectable form).

This is not a complete list of side effects and others may occur. Call your doctor for medical advice about side effects.

TAP Funnily enough our son is a bit red in the face today, and we will be watching out for any other side effects. That stupid b***** of a paediatrician swore blind she had not made any other interventions other than the Engerix-B. It turns out she was lying about that as well. No surprise there. She was trying to ingratiate herself and ask us to come back for further abuse. There’s money at stake. The hospital’s policy of informing patients of interventions won’t be applying to her. $$$$$$$$$$. Hopefully she’s failed to make our son ill requiring yet more of her interventions. I am sure she knows which vaccines are best for bringing in more business.

MESSAGE The Asian Hospital and Medical Center badges itself as one of the best hospitals in the Philippines. If this is the best, God help the rest. The sick bastards made a big show of taking us out through the lobby at the end, handing a red rose to Shane and having an army of bag carriers for the three shopping bags we had, which I could have easily carried, and a wheel chair for Shane even though she’s walking fine. We felt compelled to cooperate with their little charade. At least, that way, we knew we could get out and away from them. The relief as we got into the taxi was palpable.

All show, and all lies – should be their publicly broadcast slogan. The management of the hospital are a leaderless rabble. Admin has no control of the practitioners. Any questions requiring management response never get answers. The practitioners can do whatever they want with patients as long as they chalk up fat profits. It’s a dangerous location for any human being to enter. My advice is keep away, at all costs. And never take a defenceless baby there. Have your birth somewhere else. They only want your money. Sick babies make more money than healthy ones.