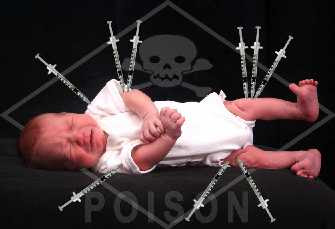 The vaccine injected into my hours old son by the unauthorised Philippine Pediatrician was none other than the Hepatitis-B vaccine, which is refused by 66% of medical practitioners in the US.

They fear its contamination with animal DNA.

EXTRACT –
Exposure to illness is an occupational hazard for the medical community. Doctors are among the highest risk population groups and most hospitals and practices make it mandatory for physicians to be vaccinated. Researcher and author Neil Z. Miller reports that approximately 66% of pediatricians and obstetricians refused the MMR shot in one study.[1] An equal percentage of doctors refused the Hepatitis B shot, mostly citing safety concerns because of rumors of animal DNA contamination in the shots.[2]

The American Medical Association’s (AMA) Archives of Pediatrics and Adolescent Medicine cite a 1994 study where approximately 1/3 of doctors were working without mandatory flu vaccines.[3] Yet the doctors blindly follow national recommendations to vaccinate every child they can round up (sometimes with as many as five vaccines in one visit).

From Doctors Against vaccines.

PLUS Comment from Road Hog –
I avoid all injections I can, I also avoid them being giving to my dog.

Which is a shame, because unless you have yearly injections, you can’t take your dog to agility/flyball. It’s just a money making scheme for the veterinary/pharmaceutical industry.

The bird flu jab was the interesting one.

In Germany, they had two types, one for Joe Public and one for the politicians (and army). One had Squalene in it as an adjuvant and also mercury, neither of which you want injected into your bloodstream. The other vaccine had neither.

Can you gues which one they were going to give to the public and which one was reserved for the politicians? The first link is an article about the politicians getting the separate vaccine and the second link (towards the end of the article) explains why you wouldn’t want squalene in your bloodstream.I think you can guess for yourselves why you wouldn’t want mercury.

2 Responses to “One Standard For Doctors. Another For Their Victims.”