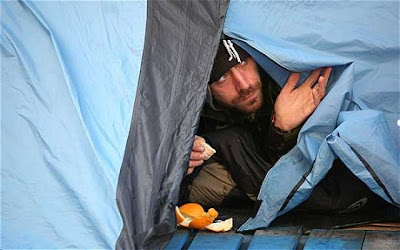 Occupy St Pauls member. What’s does he dream about?

Have recently heard from Occupy that the Tavistock Institute have been running Social Dreaming Events (SDE) at Occupy London (and other major Occupy camps). I don’t think the Occupiers were initially aware of the source. Ironic that there is history of bankers (Rockefeller/Rothschild) funding Tavistock, when the Occupy camp is protesting against the banks. It was sold to them as a benign research project.

The SDE’s were happening for about 5 weeks, most days. You are either a facilitator (from Tavistock) or a participant. This creates a massive power imbalance, as the facilitators set up and instruct the sessions, while the participants share some very personal details of their dream experiences, which are then recorded on a public blog! All our school training is paying off nicely here, we are so obedient to instructors manifesting as experts. If SDE has potential for genuine therapeutic use, the facilitators would have to be totally trustworthy for it to be beneficial to the participants. There is plenty of evidence to show that Tavistock Institute is not trustworthy at all.

It must cost them a bit of money to fund so many facilitators, 2 or 3 each day, for so many days. I guess Occupy is becoming too influential. I reckon a way to muck up their “research ” would be to feed them completely false dreams, play them at their own game. They rely on our cooperation with their little games and plans.

EXTRACT
Social Dreaming was invented in 1982 by Dr Gordon Lawrence, a social scientist working at the Tavistock Institute of Human Relations, as a form of enquiry into social phenomena through the use of dreams.

Since the 9th of November regular Social Dreaming Events (SDEs) have been taking place at Tent City University, Finsbury Square, London, facilitated by the staff and colleagues of the Tavistock Institute of Human Relations.

SDE facilitators are working at St Paul’s and in other cities around the world – Tel Aviv, New York, Melbourne, Bristol, Dublin and elsewhere.

The chilling thing is the involvement of the Tavistock Institute of Human Relations.

The Tavistock Institute has long been identified by a variety of credentialed researchers as an influence in British Psychological Warfare. The propaganda and public opinion manipulations (including mind control agendas) orchestrated by the Tavistock Institute is covered at length in, for instance, the books of David Icke and Dr John Coleman . Dr. Coleman, former intelligence officer with Britain’s MI6 and author of Conspirators Hierarchy, The Committee of 300, was one of the first writers to bring the world’s attention to the existence of the pivotal role that Tavistock plays in shaping political, social, educational, and economic ‘opinions’ worldwide.

I can’t stress how important it is for people within the movement to examine the history, activities and connections of the Tavistock Institute, something which should have been done before inviting them in to set up structures in which member’s subconscious processes are being handed to them on a plate. I find it unbelievable that this has been allowed to happen.

Blog by Tavistock on the SDE’S at Occupy

HETT sends in this item, which shows how ‘subtle’ and premeditated the methods of control are.

For the last few weeks I have noticed that when I go onto a political Facebook page or a website (e.g. Wikileaks, Robin Hood Tax, Positive Money), and start looking at the comments, a large number are really stupid, aggressive and misleading. The site moderator then spends a lot of time dealing with them, thus clogging up the comment thread. The effect it has on me is that I don’t want to be there, because, insted of sharing info and having constructive debate, it is just making me cross. It seems odd that there are so many people spending so much time hanging out on these sites which they don’t seem to like and all having standard PR media feed type views. I smell a rat. Before I read this post about Academi, I was wondering if people are being employed to mess up grass roots Internet communication… Anyone else noticed anything?

TAP There are paid monitors on all key sites intervening in what people imagine to be spontaneous chat. They have to stop the natural flow of information passing from person to person. Otherwise their control of the media would be threatened. I find they usually just comment ‘No it isn’t,’ when I write something which undercuts the narrative. Or they go ad hominem. The audience seems unable to let go of media implanted notions, and see the media as authority figures. The more educated people are, the less able they seem to be at seeing a different viewpoint, or disobeying Big Brother. Yes, in a word. Control is everywhere.

Did you watch this?

The “Revolutions” of the ’90s and ’00s were globalist sponsored. They received funding from globalists, worked from a revolution textbook (written by Gene Sharp, interviewed)) and were assisted on the ground by revolution coaches, such as Srdja Popovic (also interviewed). Their manufactured revolutions share the same symbols (raised fist) and strategies (music).

HETT replaces video which got lost above –

Am I underestimating this threat? I believe that this blog complies with the laws of copyright. I don’t have hardly any music, and most pictures are not connected to entertainment.