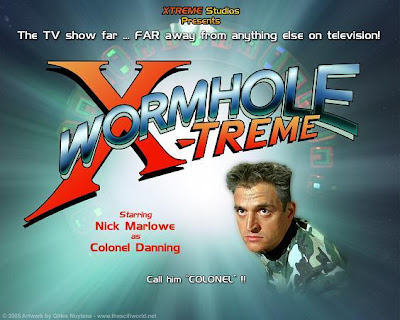 The TV Show ‘Wormhole Extreme‘ features the earth’s Star Gates in Stargate’s 100th and 200th episodes, according to David Wilcock.

Q. Was the war in Iraq all about the Star Gates?
A. I don’t know, but take a look at the claim that the shuttle was the US’ last space capability vehicle.

Was the shuttle really the last US space entry capability? asks Bill.

Let’s all go take a look at Area 51, he says. We need to know what’s going on in that place.
Occupy Area 51.
Where is the $2 trillion hole in The Pentagon’s budget?

Q. Re the Moon and Mars
A. Get a good telescope and tell me what you see. Do you see things that look terrestrial? They might not be fun places to live, but they can be seen.
Q. Did you ride the underground trains at Area 51 to Pine Gap?
A. Look at Google ‘Laser Drill’. It drills at 7 miles a day. How many tunnels can ten of these devices dig out in a year? Other sources claim 18 miles a day. A laser at 100W will shatter a concrete block in 1 second by heating it up. Imagine a laser powered with 1 million watts.

We’re laying our lives on the line, our health on the line. It can lead to extreme public ridicule, vitriole every day. The world needs our help, and we are willing to step out and put a public face behind exposing these facts to the world. Events which will happen later this year will justify what we are saying and doing.

Kelly – There is a hidden war of epic proportions going on.
A. No real reply.
Kelly Does Congress know about all these things?
A. There are extremes of power, but eventually the circle comes around and everyone can see the truth. Watch the movie ‘Thrive'(?). There is unlimited energy easily available. If people didn’t need to be in power, how different this world would be.

STATEMENT – I found out UFOs were real in 1992. I am now finding out how we’re going to get through this. I am now aware of the people who care about us and love us, who are trying to help us, but who are operating covertly, in an alliance. People are coming forward, where it was once only Benjamin Fulford and me. Operation Camelot have pledged their lives, and I feel great gratitude for the people and initiatives emerging.

But when are we going to start seeing any visible changes? People are figuring it out, having hope and things are happening. I pray the good guys will beat the bad guys. I pray the elites, the Bilderbergs will lose. It’s not a conspiracy. It’s sad and it’s true.

It’s not just me. It’s not just David (Wilcock). Real cooperation is coming. Let’s tell the elites in our meditations tonight to tip their …over, all we care about is ending the illusion they perpetuate to stay in power. It’s not dying. It’s dead. If they back down, they could have an honourable discharge and step down from their elite status. Or not it could be the night of the long knives. There is a plan being magnificently well orchestrated. It is spectacularly more complex in its execution than I knew.

KELLY – we are tipping our hats to the White Hats, who deserve our thanks as well, the people operating covertly risking their lives to bring these changes about. Sign the petition against the NDAA please, to send a message to TPTW – the powers that were.

19 Responses to “Occupy Area 51. Where’s The Missing $2 Trillion In The Pentagon’s Budget?”