The feedback from the Fear Of Facebook post is that most people are too frightened to even read articles which bust open the lies and deceptions of the World Government.

This is Scotty’s take on that…

So, some people are too scared to view controversial topics online?
That is just a not good enough.

What chance is there for humanity if people are too scared to even acknowledge their own demise, let alone dare to object?

If TPTB are allowed to continue with their plans, life in a few decades may not be worth living anyway (for the few that they decide to keep alive, to service their needs re. Georgia Guide Stones) so people may as well stand up and be counted now.

Many people have fought and died for the causes they believe in.

These people who are too scared to even look are beaten already. Pathetic.

I know the types we are talking about – the polite middle-classes, who went to college and swallowed all that anti-family, anti-human Marxist claptrap. They would swallow anything, any old nonsense you tell them, they are so compliant. I know someone exactly like this. BA and MA degrees – he’s never had an original thought in his life, he swallowed everything they gave him. I sat in a pub once listening to him explaining why freedom of speech was undesirable – all delivered in very polite, non-confrontational language and terminology of course. Pseudo-intellectualism. These people are the mind-controlled, the mental foot-soldiers of TPTB, the OWG, NWO etc.

And also, generally speaking, ‘middle class intellectual’ is an contradiction in terms, an oxymoron.

Intellectual implies thinking for yourself, as opposed to being programmed. These people make up an army of spineless automatons. They are sold the dream of being just like the people on the adverts; they just have to do and think exactly what they are told and not allow themselves any rebellious, dangerous free-thinking. Think inside the box.

NB – I don’t really want to use the term ‘middle-class’, as I think it’s out-moded and obviously doesn’t apply to everyone in what we perceive to be that group. We need a new designation for this spineless army of brain-washed and brain-washing robots.

TAP How about graduates?!! I find that all the people I know who were at Oxford, Cambridge or higher centres of learning, really cannot accept that what they learned by rote all those years ago is 90% falsehood. The bloke who fixes the plumbing or delivers the logs, or the single mother struggling with bullying school regulations, are far quicker on the uptake, and have a pretty good idea of the evil they are up against. Also Filipinos (where I am currently writing) live in an obviously corrupt environment, and it is nothing for them to get it that the world as a whole is fundamentally corrupt. The problem, as you say, are English-speaking Middle Class system-educated public and corporate servants. 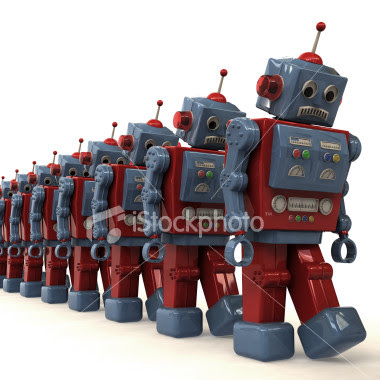 Graduates….ready to leave the production line. No wonder numbers in higher education have been expanded ten times over in the last thirty years. Governments get each generation dumbed down before they start work, ensuring no original thinking, or insubordination ever takes place.

COMMENT –
I post articles in my personal Facebook status updates. None of the articles have had any response to them. I think it’s 1. Pride: How dare someone knows more than me/tell me what to do. 2. Being scared: Don’t want my comment or “Like” to this article to appear on my own status feed. 3. Lacking an understanding of what the real world is: He’s only doing that news stuff for his own entertainment. It’s irrelevant to me because I’m interested in __Deamland___. One of the problems with younger people is pride. They don’t want to admit they’ve been conned, and would rather live in a fantasy world of entertainment and pretend the real world doesn’t exist. This is the mindset that if you live in the real world, or think about the real world, then you are a failure, because it’s so much more enjoyable in dreamland. However, I think waking up graduates, who still have the challenge of making their way in the world, is easier than waking up older people who are comfortably off, who are influential in the community, who vote regularly, who think they’ve seen it all (except they’ve not witnessed tyranny), and think they’ve earned the right to switch off and enjoy life.

TAP – That’s also true. Money makes people impervious to knowledge. Often the two, education and money, walk hand in hand. That is until the current generation. My lot (graduated 1975) are terribly self satisfied as they made money in the property boom, for the most part, and are so proud of themselves, that information that they’re being conned is simply not permissible. The new generation likes entertainment land, but are facing harsh conditions, and are able to see more once they wake up.

GILLIAN My late working class parents knew exactly how this world is really run and just who is
running the show. They learnt this from their parents.

My (very) late paternal grandfather worked for King Edward V11 both when he was King and before
when he was still the Prince of Wales. My maternal grandmother was in service to the so-called landed
gentry.

Servants were ‘invisible’ to TPTB therefore anything and everything was discussed by the toffs with not
a second thought given to the servants overhearing them. Newspapers would never have printed stories from
servants back then. Even now what they print about royalty is mostly piffling. Just enough to give the illusion that they are somehow accountable, just like the rest of us. That’s a laugh!
It was common knowledge to the working class back then just how the system works.
The middle class however seemed completely in the dark. Up until about 80-100 years ago this knowledge was handed
down by word of mouth down through the generations. That no longer happens. So therefore we have to discover the truth
for ourselves nowadays.

I feel sorry for people who go through the university system, up to a point. They are being subjected to brainwashing and conditioning on a massive scale. They and the middle class in general are the people who find it the most difficult to accept
that things are not as they have been led to believe. I’m generalising quite heavily here and there are of course exceptions.

TAP – So the middle class are the real mugs!! Are there any middle class university educated people reading who want to hit back? I am beginning to wonder if university selection is made not on intelligence and ability at all, but on likelihood to comply. The people who have lots of ideas tend to drop out of school or college, as the whole thing is so laborious. Now that wouldn’t be me talking about myself would it! OK, I did. Merton College, Oxford in 1975 in my third year, studying Law. A friend of mine from then is now a QC – a top barrister earning megabucks working for governments, top football associations and so on. He has not a clue about what’s actually going on. Another has made it big in The City, buying out and financing companies making millions. He too won’t even think if there is another explanation. Life’s just too sweet carrying on complying with the requirements of the powerful, I guess.

That said, it wasn’t til I was invalided out of work for years on end aged 50, that I got around to blogging, and reading unconventional books, the kind you’ll never find in Smiths or Waterstones. The ‘graduates’ are aware of ‘conspiracy theory’ but don’t buy it at all. 90% are probably aware that it might threaten their status within the system, and don’t want to know.

TAPOn reflection The elites set the terms on which education is given. Discipline was always very harsh with punishment for laziness, and reward for ‘hard work’, as defined, being basically doing whatever your teacher decided. The teachers were also controlled by a system which permitted them to teach, as they are today. Their aim today is to dumb down. Then it was to produce efficient public servants to administrate the machinery of government without rocking the boat.

In reality the hardest work is thinking. People who are trained to copy are mostly not able to think. Everyone who goes through the education system has been trained to copy, and any impulse to originality severely checked. That gives lazy people an advantage. The hard working are lost as copying machines. Only the lazy have the capacity to discover the reality that the system being copied is rigged and designed for the purpose of preventing people from questioning, and finding bettwe ways of doing things.