And for those who said crops aren’t pollinated by bees? You’re wrong. Alfalfa is. blog.targethealth.com/?p=58

And if you think Monsanto isn’t dominating our government? Read some cables released by wikileaks all about our officials asking for talking points from them, our ambassadords urging trade wars on their behalf:

This could be the cause of the unexplained disappearance of bees

cellphone towers basically? Not so says the next comment. Bees do fine away from agriculture in towns and cities where sprays are not used. There are mobile phone towers all around. This commenter actually keeps bees.

Hi Tap, The information in the links are false trails, to lead in circles.
As bees in Towns, Vilages and City hives are doing well, then it’s obviously not mobile phones that cause CCD.
Most gardeners that I know do not use insecticides, and grow various types of vegetables and flowers. So that’s a good indication.
There are never any dead or dying bees left in the hives that I have had. They have all cleared off, because , they knew they were being poisoned. Neither were there any bodies near the hive, indicating they flew off.
All the indication was poison of some form or other. All the bee protection authorities getting GRANTS were silent.

It’s funny how Prince Environment has never said anything about bees being in trouble from sprays… He must know. 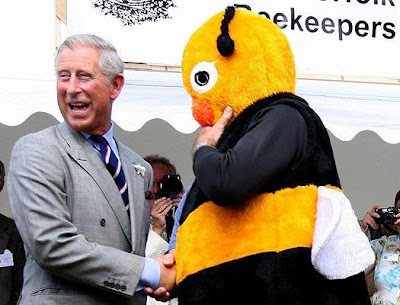 10 Responses to “Monsanto Are Killing The Bees.”