TAP – I suggest a book in the reading list which explains how Hitler was assisted by the British and Americans to escape from Berlin at the end of WW2. The Russians always said that Hitler was not found at the bunker, but one of his doubles, Gustav Weber or Weler. Hitler was trained in London in 1912 by The Tavistock Institute, and was considered to be a British/OWG agent right through his rise to power and throughout the war. His grandfather was most likely Jewish, and possibly a Rothschild. His upbringing was well funded by undeclared sources.

It is commonplace for the supposed evil dictators that the west is persuaded to hate, and occasionally fight, to be agents of those same western powers, in need of enemies to justify wars, and their attendant concentration of state power. 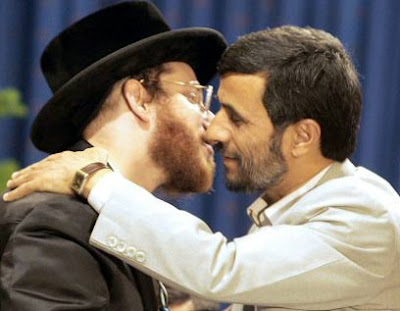 Does he hate all Jews….or is he a Jew?

There is considerable mounting evidence regarding the fact that Ahmadinejad is a Jew & an agent of Rome. This is not as strange as it sounds, when you compare this with Hitler, who was also a Jew & Agent of Rome.

But Hitler was a Jesuit, not too sure that this would apply to Ahmadinejad Though, but he could be he is a secret SMOM.

Mehdi Khazali, the son of the conservative Ayatollah Khazali, has written on his personal website that he recently learned that President Mahmud Ahmadinejad has Jewish roots.

Khazali notes that Ahmadinejad changed his family name from Saburjian, and says that the origins of the Saburjian family in the town of Aradan should be investigated.

Ahmadinejad’s relatives had told Britain’s “The Guardian” following his election that the family had changed its name for “a mixture of religious and economic reasons.”

“The name change provides an insight into the devoutly Islamic working-class roots of Mr. Ahmadinejad’s brand of populist politics,” journalist Robert Tait wrote in “The Guardian.” “The name Saborjhian derives from thread painter — sabor in Farsi — a once common and humble occupation in the carpet industry in Semnan Province, where Aradan is situated. Ahmad, by contrast, is a name also used for the Prophet Muhammad and means virtuous; nejad means race in Farsi, so Ahmadinejad can mean Muhammad’s race or virtuous race.”

Ahmadinejad, of course, is known for his frequent slurs and threats against the Jewish state of Israel. The claim about his background should be seen in the context of a growing rift among the president’s political allies, the so-called principalists, in the run-up to the June presidential election.

Is Ahmadinejad a Mossad agent?

By Damien McElroy and Ahmad Vahdata

A photograph of the Iranian president holding up his identity card during elections in March 2008 clearly shows his family has Jewish roots. A close-up of the document reveals he was previously known as Sabourjian – a Jewish name meaning cloth weaver.

Do I detect that we have been down this route before, deja vu “The Final Solution”?
click here

The short note scrawled on the card suggests his family changed its name to Ahmadinejad when they converted to embrace Islam after his birth.

The Sabourjians traditionally hail from Aradan, Mr Ahmadinejad’s birthplace, and the name derives from “weaver of the Sabour”, the name for the Jewish Tallit shawl in Persia. The name is even on the list of reserved names for Iranian Jews compiled by Iran’s Ministry of the Interior.

Experts last night suggested Mr Ahmadinejad’s track record for hate-filled attacks on Jews could be an overcompensation to hide his past.

(TAP – or the usual Zionist game, going back over a hundred years, of manufacturing anti-Semitism to disguise the game of accumulating Zionist power.)

Ali Nourizadeh, of the Centre for Arab and Iranian Studies, said: “This aspect of Mr Ahmadinejad’s background explains a lot about him.

“Every family that converts into a different religion takes a new identity by condemning their old faith.

“By making anti-Israeli statements he is trying to shed any suspicions about his Jewish connections. He feels vulnerable in a radical Shia society.”

A London-based expert on Iranian Jewry said that “jian” ending to the name specifically showed the family had been practising Jews.

“He has changed his name for religious reasons, or at least his parents had,” said the Iranian-born Jew living in London. “Sabourjian is well known Jewish name in Iran.”

A spokesman for the Israeli embassy in London said it would not be drawn on Mr Ahmadinejad’s background. “It’s not something we’d talk about,” said Ron Gidor, a spokesman.

The Iranian leader has not denied his name was changed when his family moved to Tehran in the 1950s. But he has never revealed what it was changed from or directly addressed the reason for the switch.

Relatives have previously said a mixture of religious reasons and economic pressures forced his blacksmith father Ahmad to change when Mr Ahmadinejad was aged four.

The Iranian president grew up to be a qualified engineer with a doctorate in traffic management. He served in the Revolutionary Guards militia before going on to make his name in hardline politics in the capital.

During this year’s presidential debate on television he was goaded to admit that his name had changed but he ignored the jibe.

However Mehdi Khazali, an internet blogger, who called for an investigation of Mr Ahmadinejad’s roots was arrested this summer.

Mr Ahmadinejad has regularly leveled bitter criticism at Israel, questioned its right to exist and denied the Holocaust. British diplomats walked out of a UN meeting last month after the Iranian president denounced Israel’s ‘genocide, barbarism and racism.’

Benjamin Netanyahu made an impassioned denunciation of the Iranian leader at the same UN summit. “Yesterday, the man who calls the Holocaust a lie spoke from this podium,” he said. “A mere six decades after the Holocaust, you give legitimacy to a man who denies the murder of six million Jews while promising to wipe out the State of Israel, the State of the Jews. What a disgrace. What a mockery of the charter of the United Nations.”

Mr Ahmadinejad has been consistently outspoken about the Nazi attempt to wipe out the Jewish race. “They have created a myth today that they call the massacre of Jews and they consider it a principle above God, religions and the prophets,” he declared at a conference on the holocaust staged in Tehran in 2006.

He could well be!

The ‘wipe Israel off the map’ quote was a media mistranslation, likely deliberate. What he was actually talking about was the regime (as in zionist government) not the country of Israel, and he said, according to a proper translation by the Middle East Media Research Institute, that “this regime must be eliminated from the pages of history.” The proper translation is backed up by experts too, you can google it. He said nothing of destroying Israel.

TAP – let’s hope that’s right. It means the war will be much harder to start.

9 Responses to “Is Ahmadinejad A Zionist Mossad Agent?”