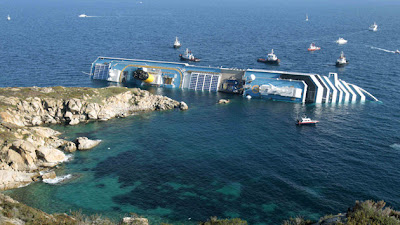 UPDATE – 24th February 2012. The other financial factor would be share trading. If insiders knew the sinking was coming, they could sell or possibly short the shares. If the news of an already declining cruise market was also held back from shareholders until the sinking, a major market decline could have been successfully engineered at precise timing – a great money-making opportunity.

The indications that this might well have been an operation of the Illuminati (like The Titanic) are listed out here, such as the sinking happened 99 years and 9 months after the Titanic (666 in reverse) off the island of Giglio which possibly means lily, a masonic symbol, and Concordia the name of the first Florentine Masonic Lodge…..

….PORTO SANTO STEFANO, Italy (Reuters) – At least three people were killed and rescuers were searching for other victims after an Italian cruise ship carrying more than 4,000 people ran aground and keeled over in shallow waters.

Dozens were injured and around 50 people remained unaccounted for after the 114,500-tonne Costa Concordia hit a sandbar near the island of Giglio off the coast of Tuscany as passengers sat down to dinner on Friday evening.

Passengers spoke of panic and described some people leaping into the sea from the listing ship, which finally came to rest on its side, with decks partly submerged, a few hundred meters from the shore.

Photographs showed a large gash along its side but officials declined to speculate on what had caused the accident in calm seas close to the shore.

They said rescue efforts were continuing after a night-time operation involving helicopters, ships and lifeboats.

“We have about 40 men at work and we’re expecting specialist diving teams to arrive to check all the interior spaces of the ship,” said fire services spokesman Luca Cari.

“We don’t rule out the possibility that more people will be lost,” he said.

But there was confusion around passenger lists.

“It’s a very complex operation because some of the passengers may have jumped into the sea and not been picked up by rescuers, while others may have been sheltered in private houses and therefore not been identified yet,” said Giuseppe Linardi, police chief in the nearby town of Grosseto.

“We were sitting down to dinner and we heard this big bang. I think it hit some rocks. There was a lot of panic, the tables overturned, glasses were flying all over the place and we ran for the decks where we put on our lifevests,” passenger Maria Parmegiano Alfonsi told Sky Italia television.

Police and passengers quoted on television spoke of people jumping off the 290-metre-long ship, a floating resort hotel with spas, theatres, swimming pools and a discotheque.

“We had a blackout and everybody was just screaming. All the passengers were running up and down and then we went to our cabins to get to know what is going on,” said another passenger, who did not give his name.

“They said we should stay calm, it is nothing, it’s just some electrical problem or just some blackout thing.”

Several passengers criticized the response to the emergency.

“We’ll be able to say at the end of the investigation. It would be premature to speculate on this,” coastguard spokesman Filippo Marini told SkyTG24 television.

Many of the 3,206 passengers and 1,023 crew were taken to the mainland port of Porto Santo Stefano where they were given shelter in schools, churches and other public buildings.

The website of the ship’s operator, Genoa-based Costa Crociere, had apparently collapsed under the volume of searches but the company set up a helpline to answer public enquiries. Costa said it would cooperate fully with authorities.

There was no word on the identities of casualties.

“We are going through the list of passengers at a reception centre that’s been set up but most of the passengers didn’t have their papers with them of course, so it’s been difficult to get full identification,” an official said.

TAP – The accident might be just that. But a century ago they said that about The Titanic, didn’t they. Governments know but tend to cover up. Insurers pay out. You have to say there is no obvious cause for this event.

Francesco Schettino is being investigated for manslaughter, causing a shipwreck and abandoning ship, police said, according to Reuters. He was taken to a jail in the provincial capital Grosseto to await questioning by a magistrate.

Experts have questioned how Schettino, the 52-year-old captain with 11 years working for the ship’s owner, could hit so close to the island of Giglio given Italy’s well mapped sea lanes.

TAP – It really is very odd. And it’s getting odder. Me asks –
‘Was this another staged terror action?’

Official indoctrination media, like Skynews, is speculating there was a “bang” before the crash. //Passengers were enjoying their first evening meal when they heard a bang and the captain said over a tannoy that there had been a generator fault. There were reports of a loud scraping and then the boat quickly started to list dramatically to the left.// Sky get a quote from a shipping magazine editor to speculate the bang is the power failure which caused the navigation to go crazy. //”I would say power failure caused by harmonic interference and then it can’t propel straight or navigate and it hit rocks,” said Mr Latarche.

This statement is contradicted by the map on the BBC which appears to show the vessel was heading straight for the island, then steered right to avoid it, then hit the rocks.

The navigation furbar theory doesn’t explain – //How it came to deviate from its course by 3-4 nautical miles – and why it capsized so quickly – will be central for investigators trying to establish the cause of the accident.// 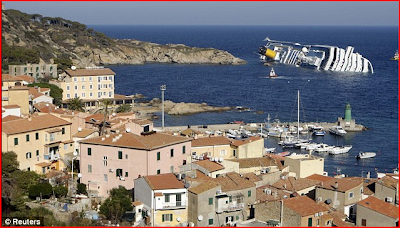 Hang On! The ship is facing the wrong way around to fit the news narrative

ME again – Photos of the Costa Concordia show it lying in the opposite direction of travel to the one the BBC map says it is going. It’s going toward Giglio Porto harbour, rather than against it. Why was it doing that? Did it turn around, then hit the rocks, or did it hit the rocks then turn around and hit the rocks again? Something doesn’t make sense. Perhaps it was hit by a torpedo 3-4 miles out at sea, and tried to get back to Giglio harbour. We’ve not heard the last of this one I don’t think. – Me.

GUARDIAN – The cruise giant Carnival, which owns Costa Cruises, said the loss of the ship would wipe up to £62m from its profits this year. The ship would be out of service until at the least the end of its financial year, on 30 November. It was too early to calculate the full costs, but the company was insured up to $40m (£26.1m) for the vessel.

Micky Arison, the chairman and chief executive of Carnival, said: “At this time, our priority is the safety of our passengers and crew.

“We are deeply saddened by this tragic event and our hearts go out to everyone affected by the grounding of the Costa Concordia, and especially to the families and loved ones of those who lost their lives. They will remain in our thoughts and prayers.”

Shares in Carnival were initially down 21% but rose slightly later. Its stock had already fallen about 30% over the previous year as the weak economic climate hit demand for cruises. Carnival owns 11 brands, including P&O, Cunard and Princess Cruises.

TAP – If I was the insurer, I would be asking questions.

ANON –
Hi Tap, Rahul is the nearest, the ship was on auto pilot.
Dominica the lady on the bridge was the honey trap.
The Captain was very experienced with 11 years at least, he was no fool, just human.
Even my grandson could have piloted the ship in a straight line, but not at night when the GPS signal was being jammed.
That’s the trouble with modern technology, thats when the spooks take over.
You can guarantee it never happened by chance.