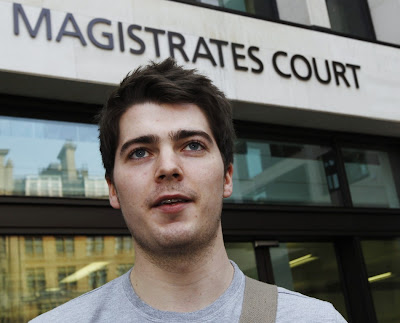 Richard O’Dwyer, ‘I’m doing what Google does, but in a much smaller way’.

Richard O’Dwyer lost the first legal attempt to stop his extradition, accused of internet piracy, doing as he describes no different to what Google does, just in a much smaller way, directing internet traffic to its requested destination.

The debate in Washington goes on over SOPA, and PIPA, and whether, effectively to close down the free internet entirely, using the excuse of protecting Copyright. In fact, they ensured the internet destroyed Copyright by constructing it the way they did intentionally. Just so it would give them the excuse to destroy internet freedom down the track.

Now they’ve arrested four people employed in the US by MegaUpload, the Hong Kong based distributor.

How long before they make it so people can’t leave comments on blogs, and find other like-minded people to discuss things with. We all need to swap email addresses. make a not of the one used by this blog in the profile.

From HETT –
Wall Street Journal.
The Federal Bureau of Investigation shut down one of the world’s most popular file-sharing websites as a debate rages in Washington over whether to give the government new powers to crack down on Internet pirates.

MegaUpload Indictment: Highlights
Authorities claim Megaupload Ltd., based in Hong Kong, and its sister sites generated more than $175 million in criminal proceeds and caused more than half a billion dollars in harm to copyright owners. Police on Thursday arrested four employees of the company in Auckland, New Zealand, charging them with conspiracy to commit racketeering and criminal copyright infringement.

See the court filing against MegaUpload.com.

The raid heats up a growing political debate that has pit Internet liberties against copyright enforcement. In response, the Anonymous hacker group said Thursday that it had brought down the U.S. Justice Department’s website and several others.

Thursday evening, the department said its web server was experiencing “a significant increase in activity, resulting in a degradation of service.” Officials said they were treating it as a malicious act and were investigating.

The FBI’s indictment named Kim Dotcom (!), 37 years old, as the founder and until last year chief executive of Megaupload. He was among the four people arrested Thursday. It wasn’t immediately clear if the suspects had retained criminal defense lawyers, and none could be reached Thursday.

Ira P. Rothken, a lawyer for Megaupload in Novato, Calif., said “the allegations do not appear to have support in the law, and the company is going to vigorously defend against them.” In a post on Megaupload’s website before it was taken down, the company wrote that “the vast majority of mega’s Internet traffic is legitimate, and we are here to stay.”

Sites such as Megaupload, known as cyberlockers, have grown in popularity and shifted the technology and business of stealing (this case is clearly not sub judice in Murdochland – never ones to steal information themselves of course!) content. Cyberlockers—so called because they offer virtual storage homes for files that can be accessed from any device with a Web browser—are often foreign sites that offer a smorgasbord of pirated movies, TV shows, music and e-books that people can download with a few clicks, say media companies, and now account for about half of all online pirate activity.

FBI officials said the timing of the arrests was unrelated to the debate over antipiracy legislation known as the Stop Online Piracy Act in the House and Protect IP [Intellectual Property] Act in the Senate. The arrests were done Thursday in large part at the recommendation of the authorities in New Zealand, one official said.

TAP – ! The Murdoch media empire is hardly an unbiased player in all of this. The timing of these and other arrests seem to be arranged to meet the political agenda. See Kim Schmitz below.

The proposed legislation, known as SOPA and PIPA, would stop U.S. companies from providing funding, advertising, links or other assistance to foreign sites involved in piracy, and would give the Justice Department controversial new powers to prevent pirate sites from getting U.S. visitors and funding.

A judicial officer guards German Internet millionaire Kim Schmitz (R) before a trial at a district court in Munich May 27, 2002. Schmitz, a 28-years-old former hacker who made millions advising firms on computer security, was detained at Bangkok airport on January 19, 2002, at the request of German authorities in connection with 11 counts of insider dealing. REUTERS/Tobias Schwarz REUTERS TOB/AKW Published Credit: REUTERS

SOPA and PIPA have riled Internet companies and some users. Much of that controversy came to a head this week, when some of America’s most popular websites, such as Wikipedia, protested against the proposed legislation on Wednesday by turning their homepages into virtual protest banners. Following that, the bills lost some support in Congress, where some lawmakers in both parties began backing away from them.

Cyberlockers emerged as big new source of piracy as an older technology, called peer-to-peer file sharing, has slowed down. Peer-to-peer programs split up big media files into many small parts, which people download from multiple locations using special software. But with cyberlockers, pirates upload and share files from a single website, often based outside of the U.S.

With many of the companies behind cyberlockers often based in foreign countries, they “are beyond the reach of what we can do legally unless we want to send our lawyers to Russia and deal with Russian law,” said Maja Thomas, a senior vice president of Hachette Digital, a unit of Lagardere SCA’s Hachette Book Group.

The charges against Megaupload offer a rare window into the business of cyberlockers. Megaupload bills itself on its website as a place where people can store large quantities of data, but prosecutors said internal emails and other evidence gathered during the probe show company officials deliberately designed the system around uploading the most popular types of files, which tended to be copyrighted material, including sharing copies of movies before they are available in theaters.

The indictment claims Megaupload took in more than $110 million over five years in membership fees and other payments via a PayPal account. It also leased capacity on more than 1,000 servers in North America and another 630 in the Netherlands.

The U.S. is moving to seize a great deal of property, including $175 million, or as much of that as they can find, and the funds in dozens of bank accounts. They are also looking to seize some of the perks of the charged executives’ lavish lifestyle, including a 2010 Maserati, a 2008 Rolls Royce, and a number of Mercedes Benzes.

Officials declined to say if they were eyeing other large cyberlocker sites for similar practices, but one said the Megaupload case should be viewed as a deterrent to anyone who might engage in large-scale illegal file-sharing.

Chris Dodd, the CEO of the Motion Picture Association of America, called Megaupload “the largest and most active criminally operated website targeting creative content in the world.”

In announcing their arrests on Thursday, the Department of Justice and FBI took the unusual step of not publicly naming any of the officials involved in the case—a move several people said was made out of concern that identifying them would provide an easy target for any vengeful hackers or protesters.

I might be wrong!! but is this deviant ‘runt’ Murdoch like a little kid throwing his remedial toys out his basket,intent to shaft us ALL.

Just because the, we UK etc? (via us the little people – the MASSES) has exposed his paper for the extreme corrupt spying & phone tapping etc,
leading to
1/ loosing his rag News Of The World papers.
2/ undermined his expansion plans for SKY?

he must be a very hurt little XmanX child.

Your opinion? care to expand?

TAP – Murdoch’s hand is poised ready to crush internet freedom if he can. He can’t take the competition. They don’t report events like the Diana Enquiry correctly, cover up inconvenient facts like Who Killed Gary Speed?, spy on the rest of humanity to expose private information for money, corrupt police forces and then start talking about maintaining lofty standards.

It’s actually laughable….were it not so serious that the Zionists have the legislative process under their control and can get all they want. …..or will they?

I would assume that the ratio of illegal files to legal files is heavily slanted to illegal. The fact the staff made a load of money from it did not help. However it does show that the US can easily reach across borders. It also shows that any legal files are also taken down and in the hands of various agencies. With one of the buzz words on the internet being ‘cloud computing’ it demonstrates how documents, images videos and so on can be seized and removed. Following the normal pattern of expansion and shifting goal posts would see them move from taking down a site where the vast majority is illegal, through to seizing a site where the minority is illegal.

I guess people will say they were committing a criminal act and profiting big time. My worry is not what has happened here but the path it could now take.