Aspartame is being rebranded, and is to be sold as a natural product called Aminosweet. 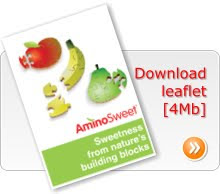 Every single bottle of cordial in every supermarket, cheap brands or expensive like Robinsons Lemon Barley water, contain the known carcinogen Aspartame, used as the sweetener. They might as well call the soft drinks section, ‘cancer club’. Millions dose themselves daily without realising the risks.

More and more people have got the message about aspartame – also used in low fat products, low calorie colas. The manufacturers know it’s time to move on. E951 has had a good run, but it needs a new name. Watch out for ‘aminosweet’.

Aspartame was an accidental discovery by James Schlatter, a chemist who had been trying to produce an anti-ulcer pharmaceutical drug for G.D. Searle & Company back in 1965. Upon mixing aspartic acid and phenylalanine, two naturally-occurring amino acids, he discovered that the new compound had a sweet taste. The company merely changed its FDA approval application from drug to food additive and, voila, aspartame was born.

G.D. Searle & Company first patented aspartame in 1970. An internal memo released in the same year urged company executives to work on getting the FDA into the “habit of saying yes” and of encouraging a “subconscious spirit of participation” in getting the chemical approved.

G.D. Searle & Company submitted its first petition to the FDA in 1973 and fought for years to gain FDA approval, submitting its own safety studies that many believed were inadequate and deceptive. Despite numerous objections, including one from its own scientists, the company was able to convince the FDA to approve aspartame for commercial use in a few products in 1974, igniting a blaze of controversy.

In 1976, then FDA Commissioner Alexander Schmidt wrote a letter to Sen. Ted Kennedy expressing concern over the “questionable integrity of the basic safety data submitted for aspartame safety”. FDA Chief Counsel Richard Merrill believed that a grand jury should investigate G.D. Searle & Company for lying about the safety of aspartame in its reports and for concealing evidence proving the chemical is unsafe for consumption.

Despite the myriad of evidence gained over the years showing that aspartame is a dangerous toxin, it has remained on the global market with the exception of a few countries that have banned it. In fact, it continued to gain approval for use in new types of food despite evidence showing that it causes neurological brain damage, cancerous tumors, and endocrine disruption, among other things.

The following is from “Stunning Statistics”;

Aspartame is used in many foodstuffs and almost every soft drink.

Since it was introduced in 1981, it has been the subject of a great many complaints reported to the Adverse Reaction Monitors of the US Food and Drugs Administration. In an article published in the ” Journal of Neuropathology and Experimental Neurology” John W. Olney said that animal studies reveal high level of brain tumours in Aspartame-fed rats.

Just before Aspartame was legalised, a commisionner of FDA, six other operatives and two attorneys assigned to prosecute Nutrasweet for submitting fraudulent tests, left the organisation to work for a Nutrasweet company.

Coca-Cola knew of the dangers of Aspartame because it originally opposed approval by the FDA. Indeed, its objections were published in the Congressional Record. It said that Aspartame was inherently unstable and breaks down in the can, decomposing into methyl alcohol, formic acid, formaldehyde and other toxins.

And yet Aspartame, which is tremendously addictive, is now to be found in every Diet Coke can.

G.D.Searle was the company behind Aspartame. When news leaked out alleging that the company had falsified Aspartame’s test results,Congress pledged sixty million dollars for the prosecution of the firm’s Chairman.However, the Reagan administration closed ranks and prevented the trial of one of their own from taking place. The Chairman of G.D.Searle at the time was Donald Rumsfeld who, until recently, was George Bush’s Defence Secretary and one of the leading “hawks” that took us to war with Iraq.

G.D.Searle is a subsidiary of Monsanto Products, the largest genetic engineering company in the world. Monsanto owns the Nutrasweet and Equal brands. The US firm, Paradigm Genetics, has been a partner with Monsanto in trials of GM technology. Innotech has a 12.4% stake in Paradigm Genetics.

Tap, it’s all “wheels within wheels”.

2 Responses to “E951 Is Changing Its Name From Aspartame to Aminosweet. It’s Still A Powerful Carcinogen.”