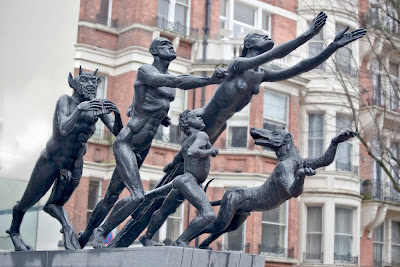 The Devil calls the tune..

I came across this abomination yesterday, it’s called A Rush of Green and is situated at 1 Hyde Park, London, supposedly the most expensive apartments anywhere in the world.

When the development opened in January 2010, the corporate media reporting the event forgot to mention that the Devil was depicted in the work. The Guardian (21/01/2011) describes the statue: ‘a bronze family and their dog, rushing forward eagerly towards the park’.

I think the statue depicts the Devil bewitching the excited looking family, enticing them onwards towards their own destruction. Very representative of the values of modern Western society.

If you turn decent Christian values upside down, ours is the society you get; an obsessive and unquenchable thirst for all things material, kept at near fever pitch by the advertising industry, the Darwinian lie of ‘the survival of the fittest’ convincing people that it’s ok to trample over all and anyone to get your hands on what you want, society saturated with sex, the destruction of the family – sacrificed for the cult of the individual, cult of the self. ‘Do what thou wilt, that is the whole of the law’.

We don’t live in a society that has left Christianity behind. We live in the anti-Christ society. A Rush of Green represents the religious beliefs of the elites, showing who they worship and what they think of all of us. And they have proudly put it there for all to see.

Does anyone really believe any more, that corporations and our governments which they control, want anything good for us and our families? Or for anyone, anywhere? The powers that be seem to be devoid of any humility or compassion, any human decency. Maybe David Icke’s right and they are from another world – they certainly act in a completely inhumane way.

This is another of Epstein’s works, it’s called The Archangel Lucifer. 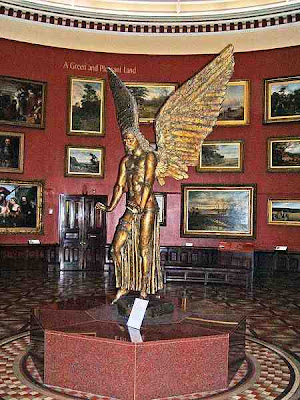 Here’s the Guardian article from January 2010 about the new development:

TAPThe secret of life is to find a scale of values that doesn’t need numerical reference or calculation, but human centred cultural values. As Scotty says, Christianity hasn’t merely lapsed.It is being driven out by a satanic culture of selfishness, extortion and murder where power structures override all human value at the family or individual level. The world is rushing headlong in entirely the wrong direction, locked into its charge by the greed of the powerful who control the minds and aspirations of the mass of ordinary people. Once people realise the extent to which their minds and behaviour are culturally manipulated, they can start to resist, and fight back towards a set of values that places humanity above extrinsic financial power, whether they be christian, theistic, humanist or all in combination. The God of finance and control by the power of secret elites must be terminated.