None of my Facebook friends dares to ” like” or “comment” or “share” my slightly controversial posts, yet I know that at least a few are reading them with interest. In private, they tell me they are frightened of showing an interest. 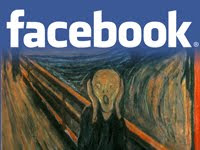 Fear is the tool of the OWG. Most of my actual real life friends won’t even go on Facebook, because they are frightened of losing their privacy, or Facebook “owning” their information, or their identity being stolen, or not getting a job because of their Facebook activity. The other excuse is that it’s just for teenagers, or they don’t want to read about people eating a banana or other seemingly trite things, which is part of the Facebook experience.

Yes Facebook!!! I am still not sure myself 100%. But these things I do know. Privacy is a complete illusion. It is used to divide us and introduce all sorts of dodgy laws. They are tracking us right left and centre anyway. When you stop caring about privacy, you feel free. How can anyone own info? It’s another tool to control us.

My gut feel is that there is huge, suspiciously huge, negative publicity being spread to stop people using Facebook effectively, especially the intellectual middle classes.

There is nothing else that comes close to Facebook as far as I know. 1 billion users worldwide, half of which log in daily! And best of all is the SHARE button! The mathematics of this are incredible. I haven’t calculated it yet but i am pretty sure it is the quickest most effective tool we have for spreading the word before it gets hijacked. The only thing stopping Facebook being the primary tool for the world revolution is people’s fear of it.

I almost gave up on it due to lack of response because people are frightened of responding, and lack of people on it because they fear their privacy that they don’t have anyway being taken away!

I have to say I am having increasing problems with the Share button, which is potentially due to some ‘infiltration’ of Facebook. I can not share anything from Youtube to Facebook at the moment for example, though I used to be able to. That in itself smacks of someone trying to stop the share.

I might be wrong of course, there are so many bluffs and double bluffs everywhere these days! But isn’t it worth taking the chance?

TAP – Fear is always the method of control. The bomb. The Islamists. Global warming. I’d never thought of fear of Facebook. But yes. Gillian told me her friends were too frightened to even look online as they feared their internet searches are monitored, and they might lose their jobs (government or corporate). I suggested she get hold of reading material to lend out to her nearest and dearest.

Fear stops people even looking at stuff. A relative of mine is a professor at an elite university. I tried talking to him about the evidence that the pyramids were 12,000 years old, and that one of their key roles was power stations, distributing electricity with Tesla-type technology. All he could offer as an excuse was that he was too busy to look at it. So much for university professors. He actually teaches this subject. I would imagine he’s afraid of even looking at evidence which could end up losing him his job.

UPDATE – B4IN (beforeitsnews) has copied this post (400 odd readers so far) and there’s quite a discussion in the comments going on, mostly saying people are right to be afraid! Here’s a suggested youtube clip from a commenter on B4IN.

8 Responses to “Do You Suffer From Fear Of …Facebook?”