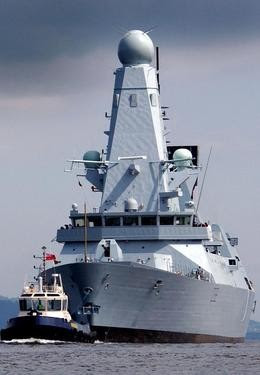 HMS Daring. The name is straight out of a Monty Python spoof.

Is HMS Daring equipped with HAARP?, asks a commenter.

TAP – I don’t think so. Those golf balls aren’t big enough. She might as well be going out to play golf, the amount of point there is in getting a war with Iran started.

The Royal Navy is sending its most advanced warship to the Persian Gulf, in a deployment intended to send a message to Iran following its threats to close the Strait of Hormuz, the Daily Telegraph reported.

According to the report, the HMS Daring, a Type 45 destroyer, will depart Portsmouth next Wednesday and has been equipped with new technology that will enable it to intercept any Iranian missile. It also reportedly possesses the world’s most sophisticated naval radar.”

TAP – Not to mention torpedoes of course, which have been getting a lot more sophisticated also. Ships are always vulnerable to missiles, no matter how good the defences. What does Gordon Logan think? I am sure the Iranians will find the whole thing very tiresome, and not a constructive step towards friendlier relations.

No one wants another war. The Iranians don’t. Brits don’t. Americans don’t. So what the hell are our governments doing trying to get yet another war started? Gordon says the Chinese will be siding with Iran if she is attacked, and WW3 will be kicked off. Will a poxy little frigate from Portsmouth be used to get a tidal wave of killing started? How incredibly pointless. Cameron really ought to know better, but then again he was backed in his bid to lead the Conservatives by the arms industry. They’ll want their payback.

THE WAR ON IRAN: The Deployment of Thousands of US Troops to Israel, The Integration of US-Israeli Command Structures

The Islamic Republic of Iran has been threatened with military action by the US and its allies for the last eight years.

Iran has been involved in war games in the Persian Gulf. The US Navy is deployed. Iran’s naval exercises which commenced on December 24th were conducted in an area which is patrolled by the US Fifth Fleet, based in Bahrain.

Meanwhile, a new round of economic sanctions against the Islamic Republic of Iran has been unleashed, largely targeting Iran’s Central Bank, leading to a dramatic plunge of Iran’s currency.

Reacting to US threats, Iran declared that it would consider blocking the shipment of oil through the Strait of Hormuz:

The Globalization of War and the Demise of the American Republic

There is a symbiotic relationship between War and the Economic Crisis.

The planning of the Iran war is being carried out at the crossroads of a worldwide economic depression, which is conducive to widening social inequalities, mass unemployment and the impoverishment of large sectors of the world population.

Crushing social movements on the domestic front –including all forms of resistance to America’s military agenda and its neoliberal economic policies– is an integral part of the United States’ hegemonic role Worldwide.

Does Constitutional Government in the eyes of the Obama Administration constitute an encroachment to “The Globalization of War”?

History tells us that an Empire cannot be built on the political foundations of a Republic.

In this regard, it should come as no surprise that the new Iran sanctions regime adopted by the US Congress became law on New Year’s Eve, December 31st, on the same day Obama signed into law the National Defense Authorization Act (NDAA 2012), which suspends civil liberties and allows for the “Indefinite Detention of Americans”. (See Michel Chossudovsky, The Inauguration of Police State USA 2012. Obama Signs the “National Defense Authorization Act “, Global Research, January 1, 2012)

The Obama administration is intent upon crushing both social dissent as well as antiwar protest. The American Republic is incompatible with America’s “long war”. What is required is the instatement of a “democratic dictatorship”, a de facto military rule in civilian cloths.

Thousands of Troops to Israel

Advanced war preparations are ongoing. Barely mentioned by the Western media, although confirmed by Israeli press reports, the Pentagon is preparing to send several thousand US troops to Israel.

In the context of ongoing war preparations, these troops are slated to participate in joint US-Israeli military maneuvers in Spring 2012, described by the Jerusalem Post as “the largest-ever missile defense exercise in [Israel’s] history.” (emphasis added)

The US global missile detection system includes satellites, Aegis ships in the Mediterranean, Persian Gulf and Red Sea as well as land-based Patriot radars and interceptors. In the context of planning the US-Israel Spring war games:

“The US will also bring its THAAD (Terminal High Altitude Area Defense) and shipbased Aegis ballistic missile defense systems to Israel to simulate the interception of missile salvos against Israel.

The American systems will work in conjunction with Israel’s missile defense systems – the Arrow, Patriot and Iron Dome.

He toured one of the Iron Dome batteries in the South and the Israel Test Bed lab in Holon where the IAF holds its interception simulation exercises.

The IAF is planning to deploy a fourth battery of the Iron Dome counter-rocket system in the coming months and is mulling the possibility of stationing it in Haifa to protect oil refineries located there.

The Defense Ministry has allocated a budget to manufacture an additional three Iron Dome batteries by the end of 2012. IAF operational requirements call for the deployment of about a dozen batteries along Israel’s northern and southern borders.

The IAF is also moving forward with plans to deploy Rafael’s David’s Sling missile defense system, which is designed to defend against medium-range rockets and cruise missiles. Rafael recently completed a series of successful navigation and flight tests of the David’s Sling’s interceptor and plans to hold the first interception test by mid-2012. US commander visits Israel to finalize missile… Jerusalem Post December 21, 2011)

Pursuant to these joint US-Israel games, there are indications that the US is also planning to increase the number of American troops stationed in Israel.

Moreover, these military exercises planned for next Spring are accompanied by a fundamental shift in US-NATO-Israel command structures.

What is now unfolding at Washington’s behest is an integration of US-Israel military command structures.

Washington is not a reluctant partner, as some observers have suggested, “with the Obama administration attempting to distance itself” from an Israeli sponsored war on Iran. Quite the opposite!

Given the integration of Israel’s air defense system into that of the US, Israel cannot, under any circumstances, wage a war on Iran without the US. Moreover, since mid-2005, following the signing of a protacol between NATO and Tel Aviv, Israel has beocme a de facto member of the Atlantic Alliance.

The Pentagon calls the shots. The planned deployment of US troops in Israel is part and parcel of a US sponsored war.

The ultimate objective of these command posts is to establish “joint [US-Israeli] task forces in the event of a large-scale conflict in the Middle East”, (Ibid). In other words, these task forces will be involved in planning the deployment of troops and weapons systems directed against Iran, with Israel playing an important role as a launchpad for military action.

What these developments suggest is that the war on Iran –which has been on the drawing board of the Pentagon since 2003– will involve the direct participation of Israel under a unified US military command.

The people of Israel are the unspoken victims of America’s global military agenda as well their own government’s war plans directed against Iran.

They are led to believe that Iran possesses nuclear weapons when in fact Israel possesses an advanced nuclear arsenal, which is directed against Iran.

The people of Israel as well as Western public opinion, more generally, are also led to believe that Iran’s president Mahmoud Ahmadinejad wants “to Wipe Israel off the Map”, when in fact this statement was concocted by the Western media, as a means of demonizing the Iranian head of state as well as presenting Iran as a threat to the security of Israel:

“Across the world, a dangerous rumor has spread that could have catastrophic implications. According to legend, Iran’s President has threatened to destroy Israel, or, to quote the misquote, “Israel must be wiped off the map”. Contrary to popular belief, this statement was never made”

(See Arash Norouzi, Israel: “Wiped off The Map”. The Rumor of the Century, Fabricated by the US Media to Justify An All out War on Iran, Global Research, January 20, 2007)

Who wants to “wipe Israel off the Map”? Tehran or Washington? Ahmadinejad or Obama?

In actual fact, the Obama administration as well as the Netanyahu government indelibly constitute a threat to the people of Israel.

Tehran has since 2005 warned that it will retaliate if attacked, in the form of ballistic missile strikes directed against Israel as well as against US military facilities in the Persian Gulf, which would immediately lead us into a scenario of military escalation.

This war would engulf a region extending from the Mediterranean to the heartland of Central Asia. It would have devastating consequences, resulting in a massive loss of life.

It would precipitate humanity into a World War III scenario.