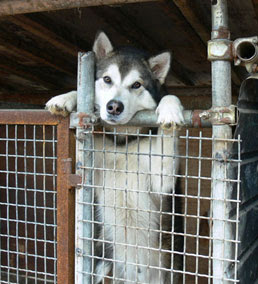 They wouldn’t really lock us all up, would they?

After the world’s most massive online protest on Jan. 18 against two internet censorship bills, which generated over 7 million petition signatures, Senate Majority Leader Harry Reid postponed the PIPA vote set for the 24th, so that lawmakers could rework the bill.

TAP – it only sounds like a delay to give the appearance of a climbdown in the face of opposition.

Though PIPA is hailed as only slightly less bad than SOPA, both threaten free access to information on the web by allowing accusers to shut down an entire website, even shared platforms like Twitter, WordPress and YouTube, because of a single copyright violation.

Instead of a civil penalty, the law proposes making copyright violation a felony. Try finding a job in the US with a felony conviction under your belt. 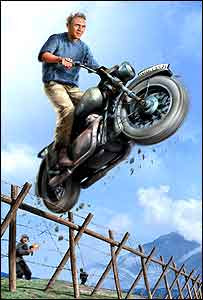 Steve McQueen in The Great Escape

TAP – Try getting to work when you’re incarcerated inside a FEMA concentration camp along with 100’s of 1000’s of others, living with daily abuse, and worse. Soon we will all be looking for our inner Steve McQueen. Richard O’Dwyer, if extradited, will only be the first. Thousands will follow.

With protests in New York, San Francisco, Seattle, and Washington, and with an online petition containing more than 7 million signatures, opposition against SOPA/PIPA has been extremely vocal. However, the voluntary blackouts of several tech firms’ websites have drawn the largest scorn toward this legislation.

The fear that these acts will allow large media firms an unfair hand in seeking copyright infringement lawsuits and “cease and desist” injunctions against alleged copyright violators was the key motivation behind this protest; companies like News Corporation (who supported SOPA/PIPA) could legally order the shutdown of sites like YouTube, which may be hosting user-created content that violated Fox trademarks under the current wording of the bills.

Reid has suggested that the bills are not dead. “There is no reason that the legitimate issues raised by many about this bill cannot be resolved,” according to the Senate Majority Leader. PIPA and SOPA have received uncharacteristic Democratic support, mostly due to Hollywood lobbyists. Time Warner, News Corporation, Comcast, and the Motion Pictures Association of America have all came out in support of SOPA/PIPA.

SOPA/PIPA is intended to combat piracy sites, such as the Pirate Bay, by forcing payment and network advertising services to investigate and respond to any outside claim that one of their customers is actively involved in the distribution of stolen or misappropriated American property, such as pirated software, movies, music, and television shows. The service would then have to terminate relations with that customer within five days. While the false accusations are illegal under SOPA/PIPA, the burden of proof is placed on the accused site and not on the accuser or the service provider.

Major Democratic contributors, such as the Teamsters and the AFL-CIO, are in support of SOPA/PIPA, and have threatened to withhold funding from the president’s reelection campaign and from Congressional Democratic races. Key Democrats are concerned about this development, even though the White House has publicly came out against both bills although it did offer the possibility of support with a rewrite.

TAP – A bit of common sense seems to be coming out of The White House. Maybe someone’s aware that closing down the internet, Youtube and so on, will be extremely unpopular, and would lead to the certain loss of the next election…and if Ron Paul did somehow make the Republican nomination (which internet closure would most likely bring about), the game of corporate domination of humanity might be over.

In an open letter, the White House’s Intellectual Property Enforcement Coordinator at the Office of Management and Budget, Victoria Espinel, wrote:

“…Any effort to combat online piracy must guard against the risk of online censorship of lawful activity and must not inhibit innovation by our dynamic businesses large and small. Across the globe, the openness of the Internet is increasingly central to innovation in business, government, and society and it must be protected.

To minimize this risk, new legislation must be narrowly targeted only at sites beyond the reach of current U.S. law, cover activity clearly prohibited under existing U.S. laws, and be effectively tailored, with strong due process and focused on criminal activity…

Our analysis of the DNS filtering provisions in some proposed legislation suggests that they pose a real risk to cybersecurity and yet leave contraband goods and services accessible online. We must avoid legislation that drives users to dangerous, unreliable DNS servers and puts next-generation security policies, such as the deployment of DNSSEC, at risk…”

TAP – In other words, they won’t close piracy down, as they think they will, only drive it beyond their reach. In fact draconian laws will be entirely counterproductive. They might for once be realising that all the power in the world has its limitations, where the internet is concerned. They want to lock us all up and throw away the key, but there are still elections to rig, and days to get through. If the internet can close itself down in protest and bring about second thoughts in politicians, it’s a very interesting new development. Virtual power is becoming greater than all of Hollywood, the TV networks and the printed media, acting in combination and has won the first round in this titanic struggle. Oh what a joy it would be to see Rupert Murdoch on trial for information theft and misuse, and not the people he feels have stolen from him. Keep blogging, bloggers. You might win yet!

3 Responses to “Bloggers! Get Ready To Live Behind Barbed Wire.”