HETT – Latest in for TAPS baby?

TAP – He seems pretty good now, thanks HETT. Sleeping loads, but wakes if not held in someone’s arms, and complains. Luckily there are many available here! There is nothing obvious. He responds very well to me singing (recorded) and smiles when I click on his favourite song. I shudder to think we left him alone for six hours after he was born, trusting the hospital not to do anything untoward. If we had had any notion of risk to him, we wouldn’t have let him out of our sight. The vaccinations made him drowsy and he ate nothing for the first two days of his life. 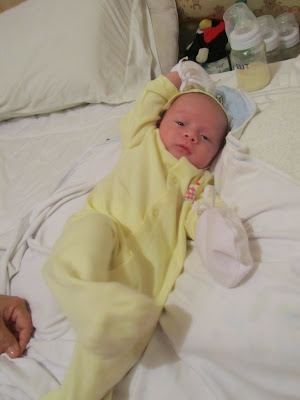 My son. Hopefully one of the lucky ones that is not ruined for life by vaccination.

HETT –
re :- “Your sons vaccinations”,
Autism: Brainwaves ‘show risk from age of six months’. It may be possible to detect autism at a much earlier age than previously thought, according to an international team of researchers.

A study published in Current Biology identified differences in infants’ brainwaves from as early as six months. see:- http://www.bbc.co.uk/news/health-16740758

Is this a test really exposing the power & success of their poison vaccines? The in-plain-view arrogance? Are they boasting?
Sadly,

ps I have a friends who have 3 boys with this must be daily hell. (I’ve seen them walk around like random bumper cars when all together in one room a few years ago)horrible!!.

TAP – We observe friends’ babies who’ve had the full programmes of vaccination. Many are fatter than you would expect, even when mostly breast fed. Many look pale and strangely lacking in energy. They get sick easily, and are sensitive.

One close friend lost her sister to a vaccination. She came home wrong from the doctor’s clinic and was a vegetable for the rest of her life. It is not a risk-free exercise. I still feel terrible that I left my son in their hands overnight on his first night in this world. The hospital guaranteed no treatment without parental permission first, as we were admitted, and like an idiot, I believed them. We don’t take our son into the hospital any more, of course, but my wife still visits the same doctor who delivered the baby. The same pediatrician who outright lied to us is still there, grinning from ear to ear, quite pleased with herself. My wife won’t take me there, as she fears what I might do.

(It’s pointless talking to them. They’re dead set on getting as many vaccines into kids as they can, lies and all)

2 Responses to “Baby Murderers Smile As They Lie To You”