In fact it could be corpses. The news story says only that ‘human remains’ were discovered on the Sandringham Estate by a dog-walker. The Police normally reveal if there is only one corpse or several, but in this case, they are going vague.

That does not assist in public confidence that the whole truth is being told. The Police seem unable or unwilling to give any details. Royal Spokesmen says only that enquiries should be addressed to The Police.

As with the poor reporting about the Gary Speed ‘suicide’ where no confirming details were provided, here again, the public is being asked to trust the media, the Police with nothing to go on. There is a huge police presence at the scene. Are the Police unable to determine anything? Into these voids pours all kind of thoughts and much doubt, and inevitably speculation. 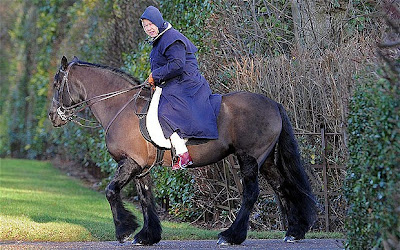 Her Majesty pops out for a quick peek at the murder scene on horseback. The theatre is complete.

Not long ago, a corpse was discovered in a tree near Buckingham Palace three years after the moment of death. The public was asked to believe that the deceased was a crazed royal watcher, and no one noticed his demise. Don’t they know dead bodies do tend to smell a bit? With tens of thousands walking by each day the non-discovery story is high farce. They really do think we are stupid!