UPDATE – Cameron’s committed on the road to war. That means false flag terror attacks get more likely by the week. Have they decided to do Blair as a way to set British public opinion against the Iranians? Trouble is, his colleagues have spilled the beans….

TAP Original thoughts…He knows too much. He either keeps very silent. Or they get the tributes out…..

The BBC have started filming interviews for Tony Blair’s obituary, it emerged today – even though the former prime minister is just 58 years old.

Leading Labour figures were said to be shocked to be approached by BBC producers putting together the tributes to Mr Blair.

There are no reports that the former PM is in bad health. Indeed, he was the youngest prime minister in nearly 200 years when he entered No. 10 in 1997 at the age of 43.
A Labour source told the Sun: ‘It seems in pretty poor taste that the Beeb is already preparing for Tony’s death. 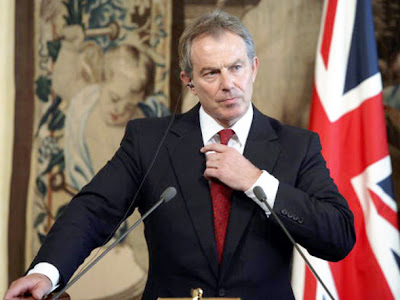 TAP It’s the usual way. Criminals always tidy up witnesses where they can, even if they’re fellow perpetrators. What else can they do with their failing asset? Ever since he blew the Presidency of Europe, it’s been downhill all the way. At least Gordon Brown’s gone invisible, and is highly forgettable. A lingering Blair is a PR problem. There was that strange occurrence two years ago when an Alabanian dropped a gun out of his car window near the Blair’s Connaught Square mansion. The Palestinians say they no longer want him as Middle east ‘peace’ envoy as he is completely pro-Israel. Maybe all sides have had enough of him.

COMMENTS
Anonymous
Tony Blair and George Bush have been found guilty of genocide by the Kuala Lumpa war crimes court. Are we in this country going to comply with international law and arrest Blair and send him for trial.
This event has not even been reported in the British press WHY?

Tap reply
As discussed on ‘Is Gary Speed’s Death Suspicious?’ this morning, the main media gave up reporting the truth a long time ago. That’s why blogs are taking over.

Maybe the best way to keep Blair out of court is to roll the tributes….

5 Responses to “Why Has The BBC Started Filming Tributes For Blair’s Obituary?”