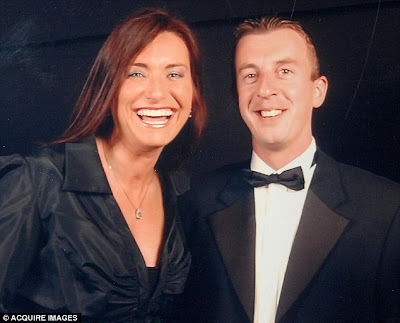 Vicky Haigh and David Tune before they split. She has consistently stated that Tune was sexually abusing their daughter, who cannot be named for legal reasons.

Daily Mail – She denied the charge (of breaking the no contact order) but was convicted last month by a jury. Haigh was jailed on Friday at Sheffield Crown Court.

…last night one of her supporters, MP John Hemming, said: ‘This is a ridiculously harsh sentence for what was a minor technical breach of a court order.’
He added that it was ‘a waste of taxpayers’ money’ and an attempt to silence a mother who had disagreed with the family law courts.

TAP They’re creating a martyr out of their victim.

In 2007 judges were granted the powers to jail offenders who breached non-molestation orders. The offence carries a maximum sentence of five years.
It is rare, however, for offenders to be jailed and is done so only when there are extreme aggravating circumstances. Haigh is expected to appeal.
The jail sentence is the latest twist in a five-year feud involving Haigh and Mr Tune, whom she accused of sexually abusing their daughter when they split up in 2006. It led to social services becoming involved….

TAP – who got the wrong end of the stick and took the daughter away from the mother. As usual, with the Family Courts, paedophiles rule. OK.

Sent in by Ken.

UPDATE – Freemasonry is a religion based on the occult Jewish philosophy found in the Kabbalah. The Talmud permits and encourages pedophilia, sex with girls over three years of age, and with boys under nine. Males under nine are not classified as men, and so the practice escapes anti-homosexual doctrines. Girls are stated as being sexually mature at three years and a day old.

Family Courts run by Freemasons are not making errors. Their religion permits pedophilia, and demand access to children. This is what Christ called the ‘unclean’ religion of the Pharisees. He was not wrong.