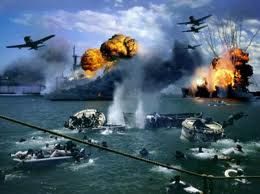 The Japanese went for it, provoked and tempted into military conquest by planted intelligence that Britain would not fight over Hong Kong,and only put up token resistance over Singapore (search Atlantis/SS Automedon). Iran has nothing to gain from war. The Iranians are being provoked, and have threatened to hit back if the provocation continues.

Pearl Harbor: 70 Years on, Is Iran the New Japan?

Is Iran the new Japan – 70 years after the Pearl Harbour incident that led to a US declaration of war and an unspeakable nuclear nightmare?

Two concurrent articles on Global Research deserve close reading because taken together they suggest that history is in danger of repeating itself, with even greater catastrophic consequences.

Firstly, Patrick Buchanan’s historical review of the run-up to the “surprise” attack by Japan on the US Navy at Pearl Harbour on 7 December 1941 indicates that it was in fact no surprise to Washington planners [1]. Indeed, the evidence presented by Buchanan shows (not for the first time) that the attack by the Japanese air force was a carefully laid trap engineered at the highest level in Washington with the coldly premeditated aim of precipitating US entry to World War II.

As Buchanan notes the Japanese “provocation” at Pearl Harbour was preceded by of a series of US provocations against imperial Japan, including severing Tokyo’s oil economy and isolating the country into a diplomatic corner.

“The question was how we should maneuver them [Japan] into firing the first shot…” then US secretary of war Henry Stimson is quoted in records from November 1941.

Such contrivance of casus belli by the US is not without historical parallel, before or after: the sinking of USS Maine in Havana Harbour in 1898, triggering the American-Spanish War; the torpedoing of the Lusitania in 1915, prompting US entry into World War I; the Gulf of Tonkin Incident in 1964, escalating America’s genocidal war on Vietnam; and the 9/11 “terror attacks” in 2001, presaging Washington’s ongoing wars in Afghanistan and Iraq.

In this historical context of Washington’s contrived wars, the present day provocations against Iran take on a much more urgent significance.

In a separate Global Research article, Tom Burghardt makes a convincing case that the US (and Israel) are conducting a covert war inside Iran, including deadly explosive attacks on Iranian military sites – two in the past month alone which claimed the lives of more than 30 Iranian personnel. As the headline of Burghardt’s article puts it: War with Iran – a Provocation Away?

The author quotes an Iranian military official saying that Iran’s armed response to suspected US/Israeli sabotages “would not be limited to our borders”.

The latest US provocation-for-a-provocation is the intrusion of a CIA stealth drone some 140 miles inside Iran’s eastern territory [3].

It is now clear that the sophisticated RQ-170 Unmanned Aerial Vehicle – which can fly at 50,000 feet undetected by radar – was on a deliberate spying mission over Iranian territory, most probably with a view to target Iranian installations for the preemptive air strikes – the very kind of air strikes that Washington and its allies have for months been threatening the Islamic Republic with.

The Washington Post described the revelation of the latest CIA drone intrusion of Iranian territory as marking the Obama administration’s “shift toward a more confrontational approach – one that includes increased arms sales to Iran’s potential rivals in the Middle East as well as bellicose statements by US officials and key allies”.

Included in the category of “bellicose” statements is that from US defence secretary Leon Panetta who last week cited contingency plans for “a wide range of military options” against Iran.

Bear in mind that the decade-long confrontation with Iran is premised on the wholly unproven assertion that Tehran is developing nuclear weapons – a claim that Iran has repeatedly denied and which years of intrusive inspections of its legitimate civilian nuclear energy facilities by the International Atomic Energy Agency have failed to verify, even in spite of Western intelligence and mainstream media manipulation.

The Washington Post again tells us: “The sharpened [US] tone [against Iran] comes against a backdrop of increased diplomatic efforts in ratcheting up the economic pain for the Iranian regime, as Washington enlists European and Asian allies in coordinated efforts to choke Iran’s economy.”

Reading that last paragraph again and we could easily, and frighteningly, substitute Japan in 1941 for Iran in 2011.

Then the words of secretary of war Henry Stimson echo with sinister contemporary meaning: “The question is how we maneuver them into firing the first shot.”

And recall too that Washington’s war machinations with Japan led to a conflagration that engulfed the Asia-Pacific hemisphere and the unleashing of perhaps history’s single worst barbarity – a nuclear holocaust.

Only this time around, the much more advanced technological means to utterly destroy would make that nuclear barbarity appear as a mere shadow of what could be unleashed in the present day.